You are at:Home»Best of '17»Stories Of The Year, Part I: Triumph And Tragedy

After publishing some 700 stories on speedonthewater.com this year, Jason Johnson, my partner in the daily news site covering the high-performance powerboat world, and I can say with confidence that 2017 was a year of stratospheric highs and benthic lows. It wasn’t uncommon for us to finish one day laughing and close out the next in tears. Cover any beat long enough—and we’ve covered this one for a combined 40-plus years—and you can’t help but get invested in it.

What follows are my five picks for the 2017 Stories of the Year. Johnson’s choices will go live on the offshoreonly.com home on Thursday, Dec. 28.

Despite our confidence in our picks based on news value, more than a little subjectivity comes into creating any list of this kind. What appears large on our radar way well fly well below yours, and vice-versa. And chances are good that we might even miss a story that should have been on one of our lists.

But enough with the explanations and disclaimers. Here are my picks for the top five stories—triumphant and tragic—of 2017.

Outerlimits’Joe Sgro (in red shirt, fourth from right) was never more at home than when he was with his customers and friends—who were often one in the same—such as during his record-setting SV 43’s V-bottom kilo record runs in 2014. Photo by Matt Trulio/Speedonthewater.com.

The Thursday’s wave of powerboats running from Miami to Key West during the Florida Powerboat Club’s signature poker run turned tragic when a new 50-foot Outerlimits Offshore Powerboats V-bottom owned and driven by Joe Sgro rolled in waters off Marathon. The 66-year principal of the Bristol, R.I., company survived the crash long enough to make it to an emergency helicopter airlift—thanks to his friend and longtime Outerlimits customer Michael “Doc” Janssen—but did not survive the transport flight. Quiet and shy by nature, Sgro preferred to remain behind the scenes at Outerlimits, except when it came to hanging out with his customers. Said Sgro’s longtime friend and offshore racing teammate Steve Curtis, “He was an amazing, fun-loving guy who truly enjoyed being with people. He was never happier than when everyone else around him was happy.”

Fast on the course and friendly off it, veteran competitor Keith Holmes was beloved and respected in the offshore racing community. Photo courtesy CK Motorsports.

Well-liked and widely respected on and off the racecourse, veteran offshore racer Keith Holmes died in a horrific wreck during this summer’s Offshore Powerboat Association Race on the St. Clair River in Michigan. Holmes, the 54-year-old owner of CK Motorsports in Nunica, Mich., competed successfully on both the OPA and Super Boat International circuits, and despite the advanced age of his American Ethanol/Cat Can Do 40-foot Skater catamaran he was among the fastest and most competitive racers in the OPA Extreme and SBI Unlimited classes. “We spent many hours, days and years talking racing and watching each one of us grow in this sport,” offshore racer Micheal Stancombe wrote on Facebook immediately after Holmes’ death. “You were always wonderful to dad and I. This one is going to sting.”

If the past five or so years have been dominated by new high-performance center console offerings, sport catamarans definitely captured the spotlight in 2017. And none was hotter than the DCB Performance Boats M28R, which was designed and built around Mercury Racing’s spectacular Verado 400R outboard engine. Since introducing the model in early May during the Desert Storm Poker Run, DCB has built and sold six of its breathtaking 28-footers—and more are on the way. Said DCB’s Jeff Johnston, “We’re delighted with the consistent performance of the M28R. It’s been a home run for DCB, and it’s been homerun for our customers.”

With a top speed so far of 123 mph, the Wright Performance Powerboats sport catamaran has turned heads around the country since it was introduced. Photo by Brad Glidewell/Brad Glidewell Photography.

Doug Wright Designs of Melbourne, Fla., specializes in building and delivering sport catamarans from the 32 to 36 feet. Performance Boat Center of Osage Beach, Mo., specializes in exceptional customer service that includes high-level in-house rigging and paintwork. The resulting collaboration between the two companies yielded the Wright Performance Powerboats 360, a Mercury Racing Verado 400R outboard-powered catamaran that turned heads around the country for its reported built quality and handling manners, as well as its 123-mph top speed. Said Performance Boat Center’s Brett Manire, “The Wright Performance 360 is loaded with everything. All the customer has to do is pick interior and exterior colors.” 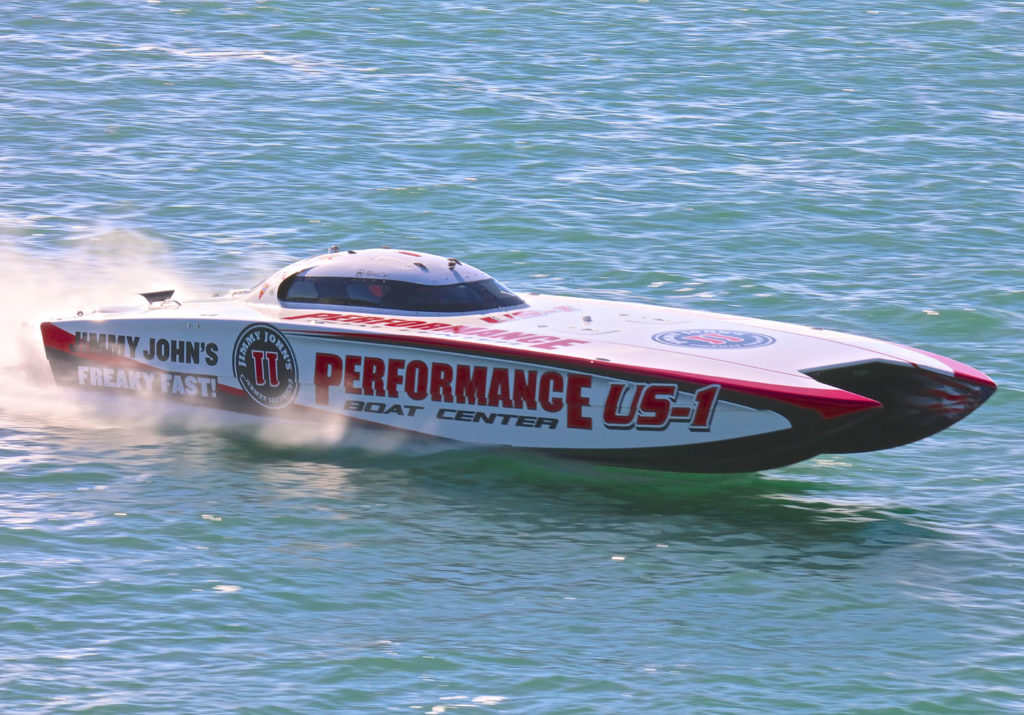 Performance Boat Center Goes Back To Back

For the second year in a row, the Performance Boat Center/Jimmy John’s Freaky Fast cockpit duo of throttleman John Tomlinson and driver Myrick Coil claimed the overall Superboat-class title in their Skater 388 catamaran powered by Sterling Performance engines at the Super Boat International World Championships in Key West, Fla. Without question, Superboat is SBI’s most competitive class with the likes of exceptionally skilled competitors such as WHM Motorsports’ Bill Mauff and Jay Muller pushing Tomlinson and coil to their limits. But the Performance Boat Center team overcame “one bad race,” according to Tomlinson, to prevail. “If you make one mistake in this class, you can easily lose,” said Tomlinson. “We knew we had to beat WHM to win the championship. They were definitely was coming on, and it would have been interesting to see what happened if they’d had a few more laps, but we were able stay ahead.”