You are at:Home»Best of '17»Stories of the Year, Part II: Almost All Positive

As Matt Trulio wrote in his Stories of the Year, Part I column yesterday, 2017 was most definitely a year of ups and downs. For me, the loss of Larry Goldman was a major low and the success of the 25th annual Key West Poker Run hosted but the Florida Powerboat Club was an enormous high. Fortunately, as is usually the case, there were more highs than lows and it shows in our stories of the year list, which we’ve written for OffshoreOnly.com every year since 2012. It’s hard to believe this is our fifth year compiling this list, but it is and here are my five top stories to add to Trulio’s list from yesterday. 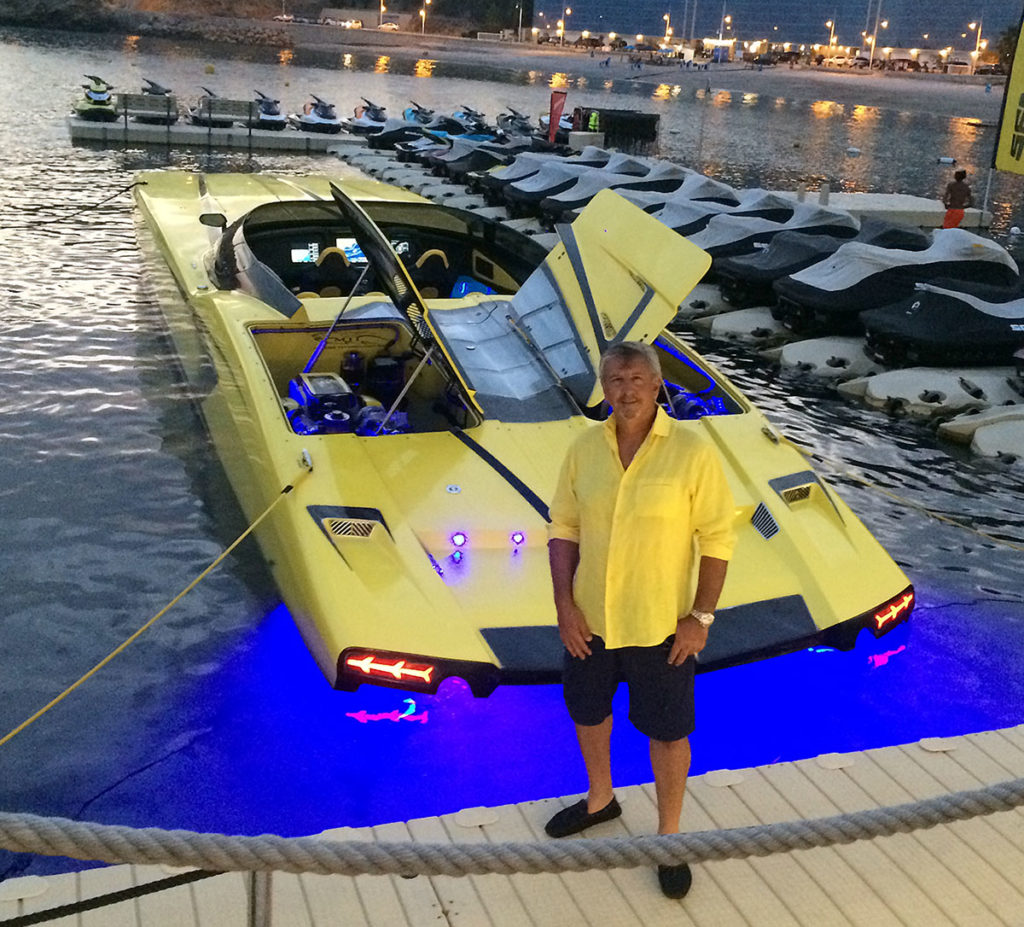 When it came to performance boats Larry Goldman was comfortable whether he was at his office in Florida or in Spain delivering an MTI. Photo courtesy Larry Goldman

The performance boat industry skipped a beat in late May when the beloved Larry Goldman, the 57-year-old owner of Xtreme Powerboats in South Florida, died suddenly after suffering a severe stroke. I was proud to call Goldman a friend, although I admit I didn’t know him as well as those who go back 20 or 30-plus years with the gifted boat racer, setup man and sales person who is survived by his wife, Jodi, and children Jacob and Jilian. As proven by the incredible turnout for his memorial service, the colorful and charismatic Goldman touched the performance boat community well beyond South Florida. 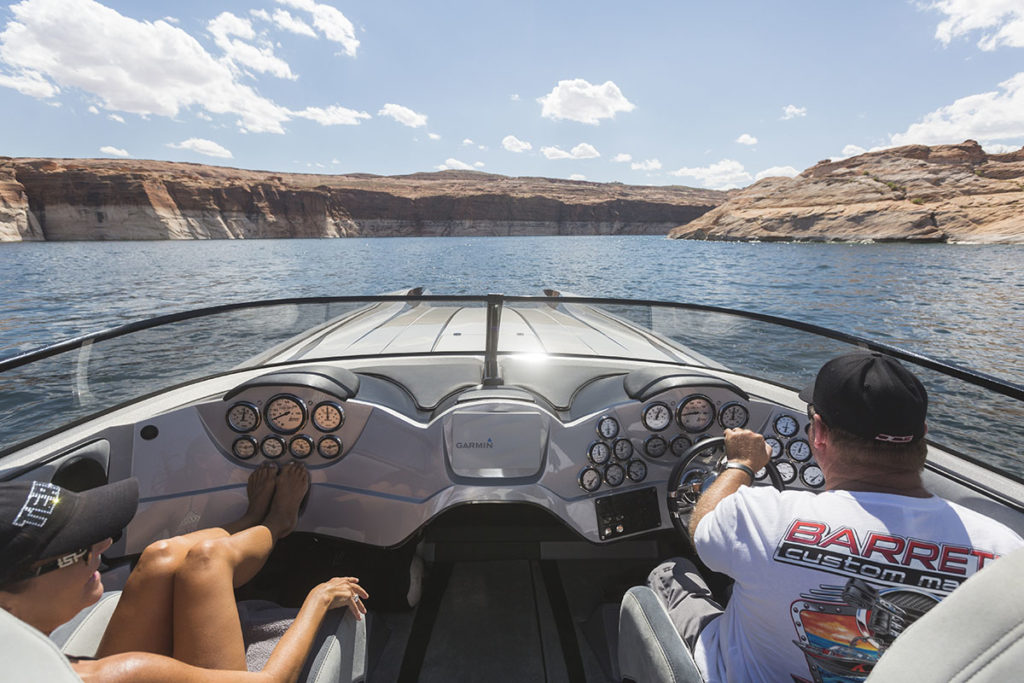 The Lake Powell Challenge in Arizona features some of the coolest scenery in the country. Photo by Tom Leigh/TommyGunImages.com

On a more positive note, the story of the year could be the fact that the Lake Powell Challenge—the ninth annual event hosted by Antelope Point Marina in Page, Ariz.—exceeded expectations and raised an impressive half-million dollars for the Mountain Valley Chapter of JDRF. Thanks to the most participation in the event’s history—82 boats—and some of the most generous boaters in the country, the Lake Powell Challenge donated $500,000 to the organization dedicated to fighting Type One diabetes. That would be a large donation total over five years let alone one. Kudos to all involved; I can’t wait to see what happens in 2018.

DCB Performance Boats delivered hulls No. 1 and No. 2 (pictured) of its all-new M44 Widebody in the fall. Photo by Tom Leigh

Being that the El Cajon, Calif., company expanded its lineup in both directions this year, it makes sense that DCB Performance Boats made it in both of our lists. And because of the fact that DCB delivered not one, but two of its M44 Widebody models—in vastly different dress and power—the company’s largest catamarans to date moved the needle in terms of news value. Both Craig Hargreaves’ Spooled Up II, which features an incredible paint job by Visual Imagination and twin Mercury Racing 1550 engines, and Mike Stevenson’s all-white 44-footer with twin Mercury Racing 1100 engines were remarkable performers and showpieces in their own right. 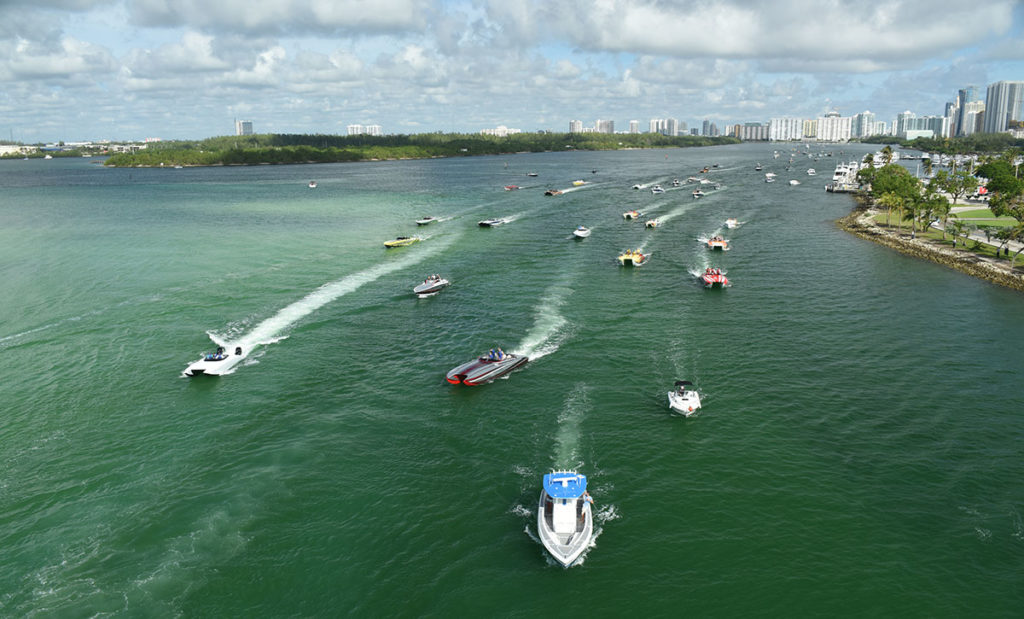 With the devastation of Hurricane Irma on the Florida Keys less than two months prior to the 25th anniversary of the Florida Powerboat Club’s Key West Poker Run, no one knew how the run would come together. In typical FPC fashion, Stu Jones and his team stepped up to the challenge and delivered a well-organized, crowd-pleasing event that featured some of the coolest high-performance catamarans, offshore V-bottoms and luxury center consoles in the country. Even with a tragic accident that ultimately took the life of Joe Sgro, the club and its members carried on as best they could to provide one of the most unforgettable Key West Poker Runs of all time. 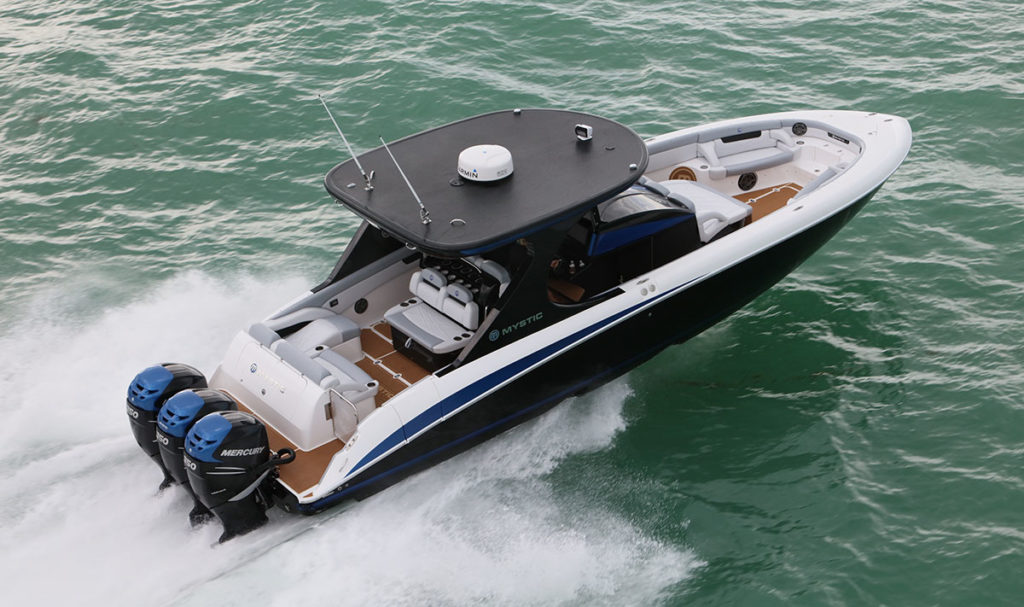 Of the many cool new center consoles that hit the water this year, such as the gigantic 57-footer from MTI and Nor-Tech’s behemoth 56-footer, the new Mystic Powerboats M3800 luxury center console that was completed in time for the Fort Lauderdale International Boat Show and Key West Poker Run was a showstopper. The sister ship to Mystic’s popular M4200 center console, the first 38-footer was powered by a trio of Mercury Marine Verado 350 outboard engines and included a striking black, white and blue graphics package. After riding in the boat in Key West, the DeLand, Fla., company appears to have another winner on its hands.

So there you have it. If you’re curious about the last couple of year’s top stories columns, check them out here: