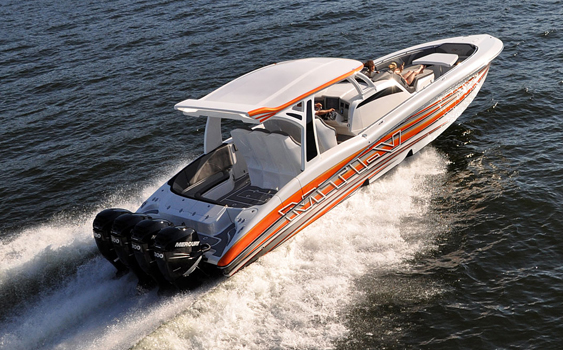 The latest quad-engine 42-foot V-bottom from Marine Technology Inc. will be in town for the 54th annual boat show.

Several years ago if you were walking into the Fort Lauderdale International Boat Show to check out the latest and greatest from the likes of Sunsation Boats, Nor-Tech Hi-Performance Boats and Marine Technology Inc. (MTI), you’d expect to see some impressive, high-powered offshore V-bottoms and catamarans. Today things are quite different. Visit the three companies mentioned, as well as Statement Marine, next week during the five-day show (Oct. 31-Nov. 4) and what you’ll find is an exceptional group of center console offerings from the go-fast boat builders.

Over the last couple of weeks I’ve been reporting on the boats being prepped to make it to South Florida in time for the 54th annual show in a special “Countdown to Lauderdale” series on speedonthewater.com. Between Sunsation’s latest 34 Center Cabin Xtreme, Nor-Tech’s 29-, 34- and 39-footers, Statement’s 350 and 380 SUV models and MTI’s game-changing V 42, I’ve learned that a concentrated effort on the center console market is what this year’s show is all about.

Obviously companies such as Concept Boats and Deep Impact Boats have been showcasing their go-fast center consoles at the show for many years and will be doing the same this year despite a larger, more competitive collection of sport utility vessels. For example, you won’t have to wander beyond the Boats Direct USA booth inside the convention center to get a glimpse of models from Deep Impact, Nor-Tech and Statement, not to mention more fishing-friendly models from Blackwater Boats and Contender Boats.

Along with several other models, including catamarans and center consoles, Nor-Tech will have its 420 Monte Carlo with twin Mercury Racing HP700SCi engines at the show.

Despite the heavy dose of center consoles, there are still a handful of go-fast-specific boats slated to be on display in case you’re shopping for that new ride. And, of course, the show always provides the opportunity to meet face to face with a manufacturer and discuss any questions you may have.

Along with its eye-popping 420 Monte Carlo featuring a golden Sunrise Candy paint job (see Nor-Tech 420 Monte Carlo Reaches 100 MPH with Twin 700s), Nor-Tech will have its equally bright green and black 40 Roadster with twin Mercury Racing 1100 engines on display at the H/I docks, aka high-performance row, at the Bahia Mar Yachting Center. 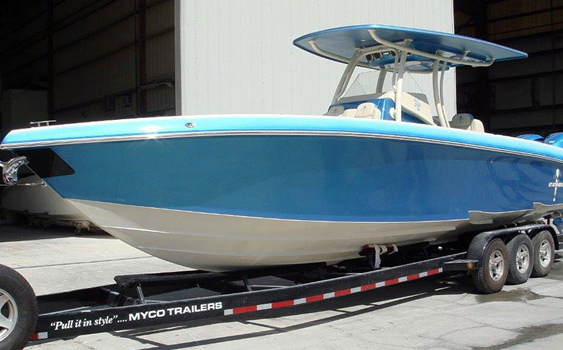 Featuring a pair of Ilmor Marine MV10 725 engines coupled with Ilmor Indy drives, Formula Boats will be showing off a new 382 FAS3Tech offshore V-bottom as well as nine other models ranging from the substantial 400 Super Sport and 45 Yacht to the 290 Bowrider and 310 Sun Sport.

And if the boats and various aftermarket equipment aren’t quite enough, there’s always the 11th annual Fort Lauderdale Boat Show Bash hosted by the Florida Powerboat Club on Friday evening (Nov. 1) starting at 8 p.m. Between socializing with boaters, enjoying a drink on the Hi-Performance dock’s floating cocktail barge and taking in the Miss Key West swimwear contest, the invitation-only affair is sure to be a blast.

While it’s definitely not up to past standards when it comes to go-fast product—the show is without Cigarette Racing for the first time in many years—there’s still plenty of excitement surrounding this year’s Fort Lauderdale International Boat Show.