You are at:Home»Boat Show»Looking Ahead to the Miami Boat Show 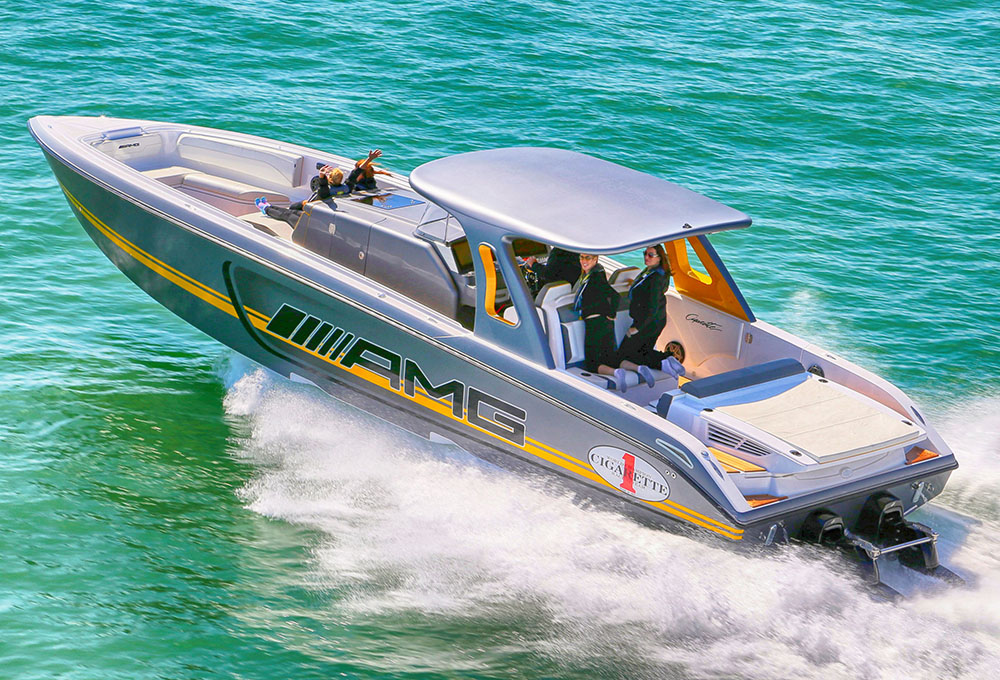 It’ll be hard for Cigarette Racing to top last year’s unveiling of the AMG SD 41 GT3 center console powered by twin Mercury Racing 1100 engines, but it won’t be surprising if the Miami-based company does just that. Photo by Pete Boden/Shoot 2 Thrill Pix

I can’t speak for everyone who is busy preparing for the upcoming Miami International Boat Show (which, by the way, starts six weeks from today with the show’s Premier Day opening on February 16), but boy am I excited about this year’s show. Last year, as many of you know, was a bit of trial and error being that it was the first time at the new Miami Marine Stadium Park & Basin location rather than the mainstay Miami Beach Convention Center.

As many people expected with the change of scenery in 2016, the logistics topped the list of criticism following several days at the new venue. The orchestration — from arriving and leaving the show, as well as certain sections of the show’s floor plan that seemed to generate less foot traffic — were the primary sticking points. 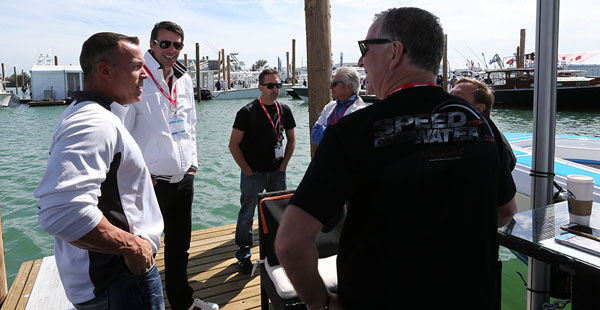 Beyond that, however, most of the feedback I received from the show goers and exhibitors was that they enjoyed the new location. And the same feedback is coming in as I talk to many of the boat builders, engine manufacturers and parts suppliers that are busy ramping up for the 2017 Progressive Insurance Miami International Boat Show.

Weather excluded — since last year’s cold, windy and rainy conditions were beyond the control of the National Marine Manufacturer’s Association which organizes the show — the consensus is that having the larger on-water, outdoor space is an obvious plus. There’s something about being on the water overlooking the scenic Miami skyline and being able to climb on a boat, test drive it, or just look at how it sits in the water, that screams boat show. Convention centers, although the norm in many instances, don’t have the same appeal.

Obviously not everyone will have an outdoor booth space, especially some of my favorite exhibitors to check in with such as Mercury Racing, Livorsi Marine, CMI and BBLADES. But that’s OK because the massive closed- and open-air tented exhibits situated around the famous Miami Marine Stadium on Virginia Key are still more refreshing than the convention center. Yes, I know there’s no South Beach right around the corner, but is that really the reason you go to the boat show? OK for some of you the answer is “yes,” but for most attending the show that answer is “no.” 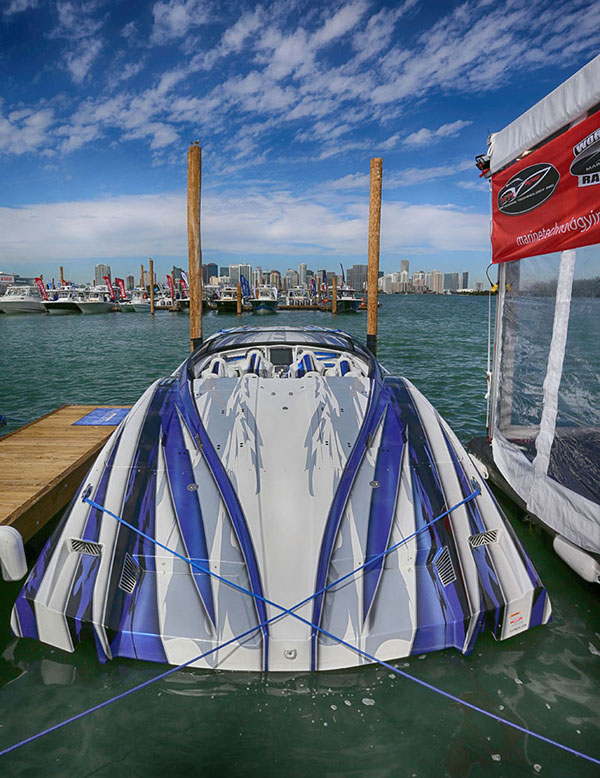 Located in the same place with the same amazing view of Miami, MTI is planning to have several catamarans and center consoles on display at the docks this year. Photo by Pete Boden/Shoot 2 Thrill Pix

Besides checking out the show’s website for more information in advance of attending the show, the first thing I’d recommend once you get there, especially if you’re in the market for a new go-fast boat or you’re just a performance boat enthusiast planning to browse the latest and greatest, is to go straight to the in-water portion of the show. I’m not going to get into specifics for this column (I’ll leave that for the Speedonthewater.com Countdown to Miami series myself and Matt Trulio will be compiling over the next several weeks), but I know for certain that many manufacturers from Cigarette Racing Team, MTI and Formula Boats to Mystic Powerboats, Skater Powerboats and Statement Marine are planning extensive displays in the water.

There’s no doubt the push to get everything finished in time for the show is in full effect—just ask Mark Morris at Visual Imagination, who is finishing paint jobs for a few “boat show” models, or Randy Scism, Tim Gallagher and the team at MTI that has been thrashing on the company’s all-new 57-foot center console. Let the countdown begin.