For five long days, go-fast powerboat builders exhibiting at the Miami International Boat Show meet, greet and hope for sales or solid leads. Selling boats is, go figure, the primary point of being there. From the cost of docks in front of the Miami Marine Stadium to housing and feeding small armies of staff members, the Miami Boat Show is an expensive proposition.

So if the sales or sales leads don’t materialize, those days get even longer. And while most go-fast boat lovers who attended the show are back at home, many exhibitors are just getting there. Some will even stay through the weekend for the Florida Powerboat Club Miami Boat Show Poker Run to Key Largo, which begins today.

Not so bad for them if the show was good, right? But a serious bummer if it wasn’t. 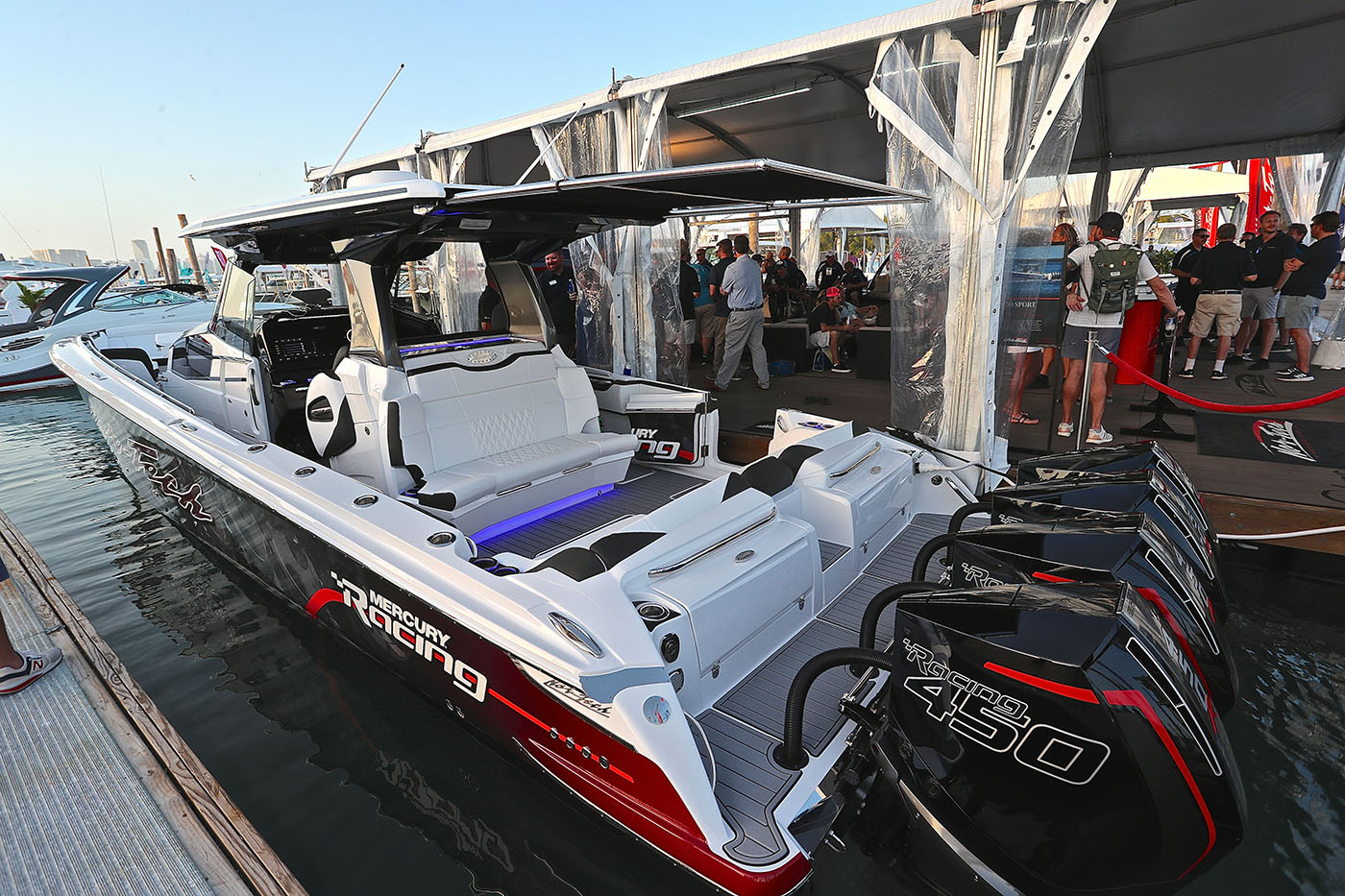 The Nor-Tech team was delighted with the results of the 2020 Miami International Show. Photos by Pete Boden/Shoot 2 Thrill Pix.

Here’s the good news. Every go-fast powerboat builder I spoke to after the show said the 2020 event show was the best since it arrived at its Virginia Key location five years ago.

“We had a fantastic show with a lot of deals working, and two boats with done deals just waiting on deposits,” said John Cosker, the owner and founder of Mystic Powerboats in DeLand, Fla.

At least on Thursday and Friday, the show did not feel overcrowded as it has in years past (at least to this reporter). But that didn’t translate to either day being “slow” when it came to producing sales and leads, according to Geoff Tomlinson, the dealer manager for Nor-Tech Hi-Performance Powerboats in Fort Myers, Fla.

“It was a great show with several boats sold and lots of leads,” said Tomlinson, who was supported by all of Nor-Tech’s dealers at the event. “It was never too packed, but there was a quality crowd, for sure.” 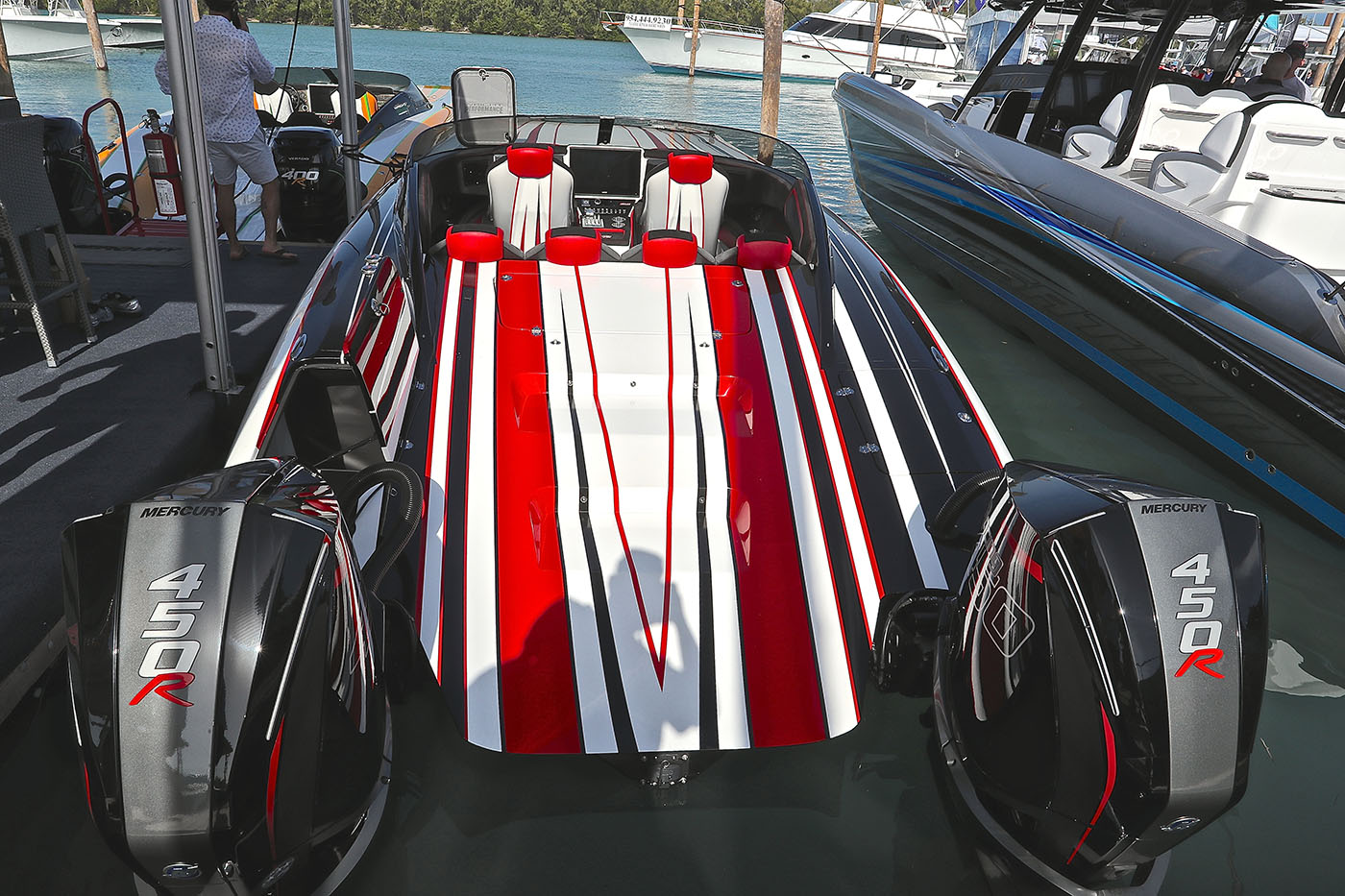 For the Performance Boat Show crew, sales included “a little bit of everything” according to the company’s Brett Manire.

Without question, the strongest United States economy in many, many years helped propel sales at the show this year. “I think everyone is doing well and feel confident that things are going to stay good for a while,” said Tomlinson.

It takes a lot to impress Randy Scism of MTI, which announced plans to release a V-50 center console next year and will host its annual fun run to the Florida Keys next month. But even the typically low-key founder of the Wentzville, Mo., company owner had high praise for the event.

“It was one of our best shows, even though Saturday was rain almost all day,” he said.

It also seemed that the show organizers did a much better job with transportation to and from the event, as well as parking accommodations, more-frequent shuttle buses and far better organized ride-app services. Though I did hear one or two transportation horror stories during two days of covering the show, my access experience from my digs in a downtown Miami hotel was excellent.

But back to sales. Brett Manire of Performance Boat Center based in Osage Beach, Mo., reported strong results from the happening for Wright Performance sport catamarans and Sunsation CCX center consoles. (Like fellow offshoreonly.com columnist Jason Johnson and I, Manire and a few members of his crew survived a scary Uber accident without injury—Miami has no shortage of sloppy drivers, Uber and otherwise.)

“We wrote more deals than ever,” said Manire, who is returning to Miami today for the FPC poker run. “Saturday was slow due to weather but Monday was solid with deals, too.

“We had more space in the Performance Boat Center booth, which helped,” he continued. “We sold a little of everything, including some big-ticket items that weren’t expected. It was a great show. I’m very happy with it.”

Though Dan Kleitz, Jason Amaral and the rest of the Outerlimits Offshore Powerboats crew from Bristol, R.I., company didn’t come away with any definitive sales and just a few strong leads, he described the exposure for the company as the “best ever” at the in-water display. Outerlimits exhibited a classic new SL 44 V-bottom and a wild SC 46 catamaran, and the cat—dubbed Hurry Up by Jason and Laurie Moe, its Washington-based owners —was the talk of the show among many go-fast powerboat enthusiasts.

“I think Hurry Up was the most photographed boat in the show—by far,” he said, then laughed. “And I also think we might an eight-seat version of the 46 almost sold.”

The 46-footer was hauled back to Outerlimits to Steve Curtis’ Offshore Marine Services in Orlando for final dial-in and setup tweaks. The SL 44, which is owned by Cass Shewbart of Texas and powered by twin Mercury Racing 860 engines, departed for Key West on Monday.

Said Dan Kleitz of the Outerlimits’ newest spectacular 46-foot catamaran, “I think Hurry Up was the most photographed boat in the show.”

Cigarette Racing Team owner and chief executive officer Skip Braver never gets specific with sales numbers of center consoles and sportboats from his Opa-Locka, Fla., company. That said, he was delighted with the reception of Cigarette’s new HyperLux model series that includes the Tirranna 59 AMG Edition, 41 Nighthawk and 42 Auroris.

Braver said the 41 Nighthawk might be part of tomorrow’s FPC poker-run fleet. But even if it’s not, Cigarette accomplished its mission of brand-refreshment with the HyperLux series introduction during the show.

“The HyperLux series and the new Cigarette’s new website present a good example of our long-term planning and direction,” said Braver, whose new company website went live on Monday. “At Cigarette, we don’t just release ‘a new model.’ Everything has long-term point and purpose.” 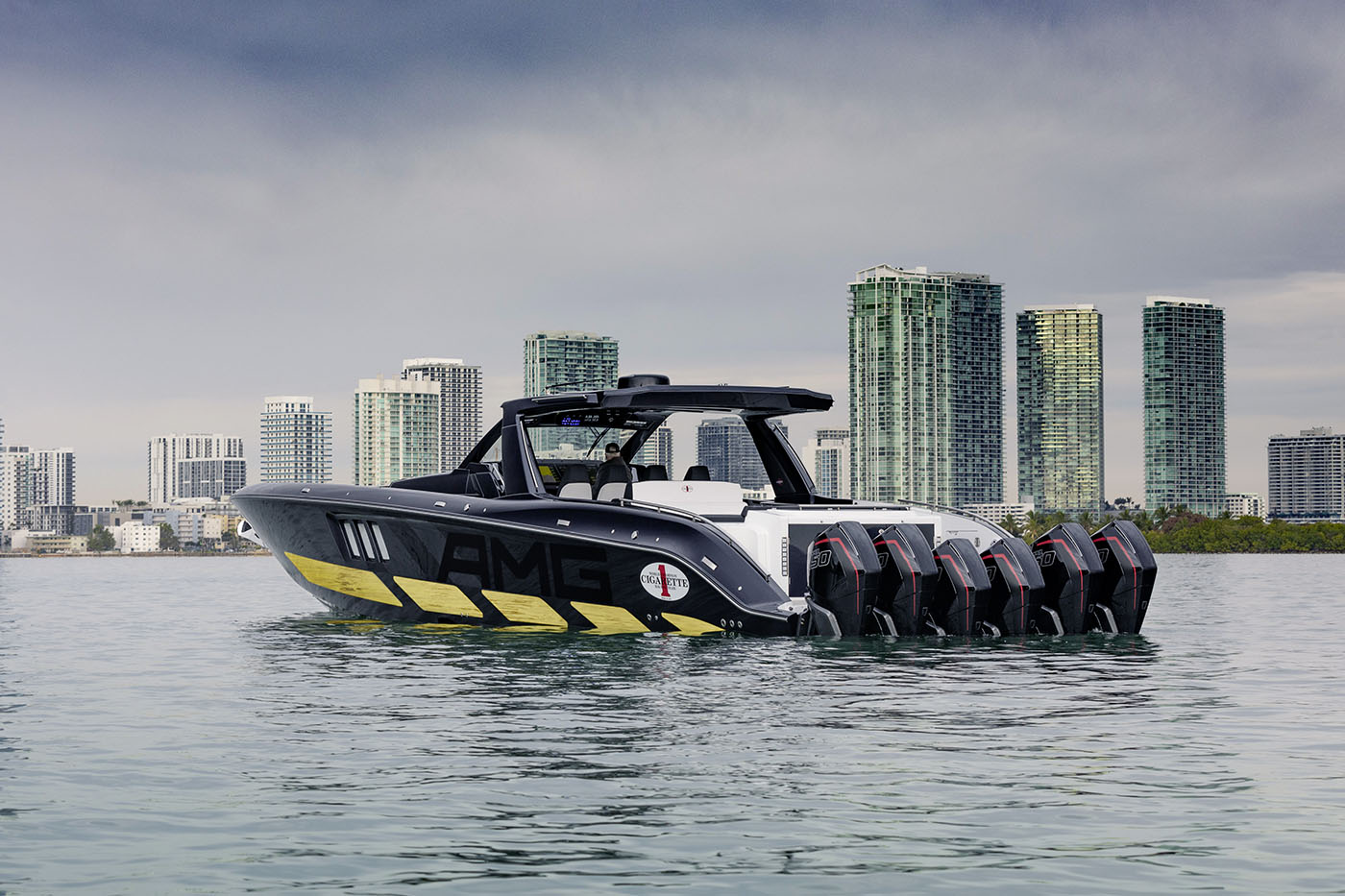 Cigarette Racing Team launched its HyperLux series during the show.

And there was Skater Powerboats, which showcased two catamarans—a colorful 438 powered by Mercury Racing 1550/1350 engines and a white 368 powered by Mercury Racing 450R outboard engines—at opposite ends of the Douglas, Mich., boatbuilder’s product spectrum. The show has been hit or miss for Skater in recent years, but with three sales the 2020 version fell into the hit category, according to national sales manager Tony Cutsuries.

But for Cutsuries and the Skater faithful, those sales were icing on the cake. Best in show, so to speak, for the Skater crew was company founder Peter Hledin getting behind the wheel of the outboard-powered 368 owned by Sam Jirik last Friday during speedonthewater.com’s annual Miami International Boat Show photo shoot.

“It definitely doesn’t get much better than having the infamous Peter Hledin at the helm of one of his own creations,” he said. 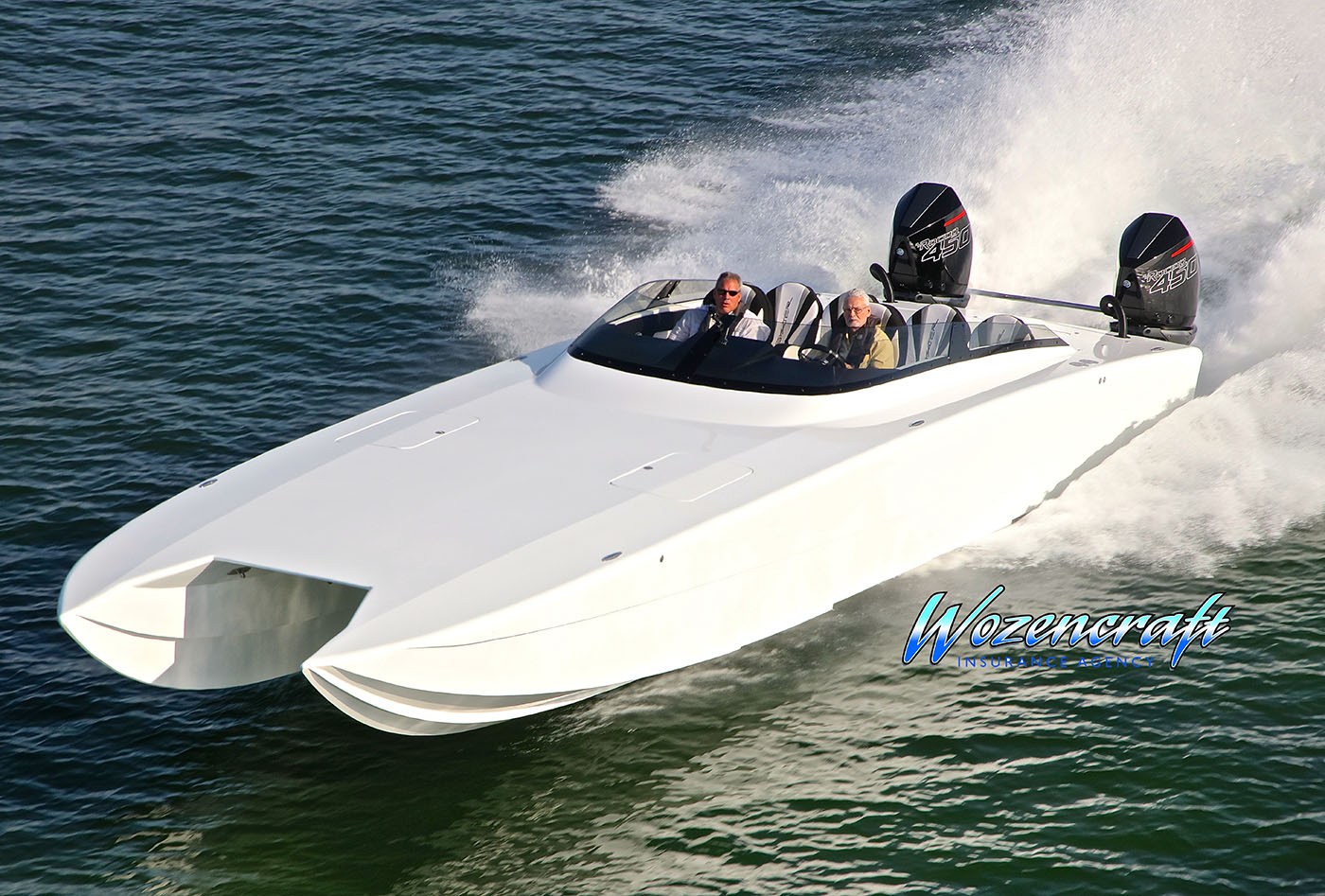 Skater’s Peter Hledin slipped away from booth duty to drive an outboard-powered 36-footer he designed and built.

Related Story: Countdown to Miami: Inside the 2020 Miami Boat Show