You are at:Home»Boating»Family Vacation: Teague Style 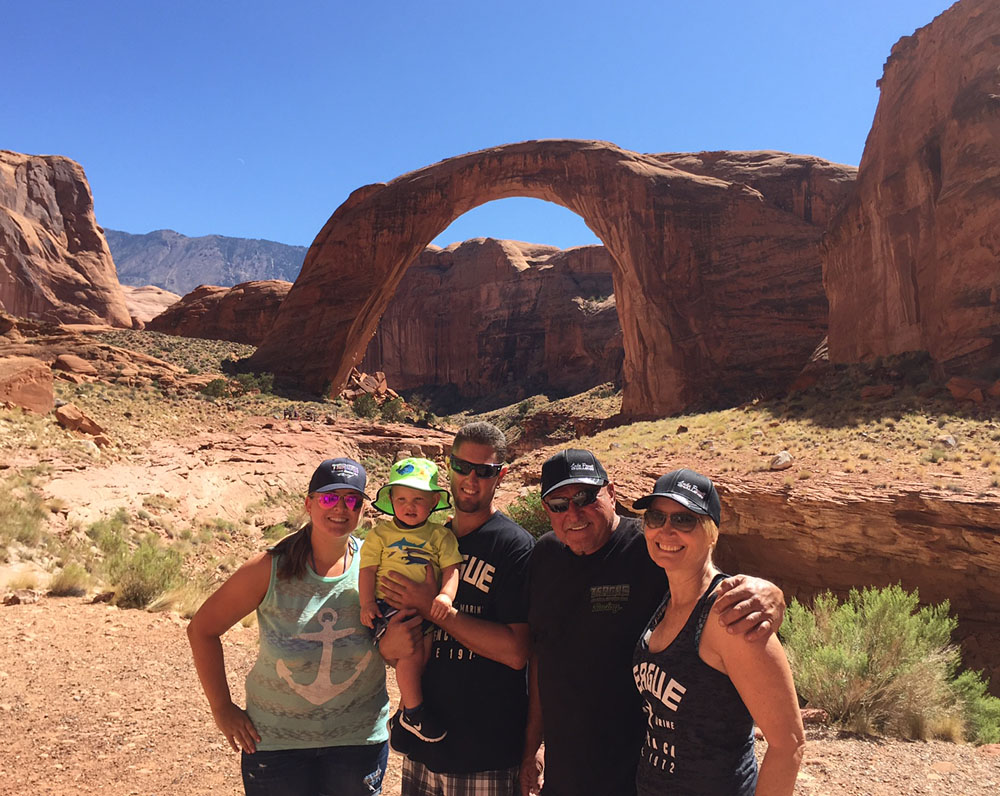 Cherilyn, Cru and Josh Noack (from left) with grandpa and grandma—Bob and Andrea Teague—made the hike from the lake to Rainbow Bridge National Monument.

Anyone want to guess what Bob Teague does for vacation? If you answered “goes boating” you’d be correct. That’s exactly what Teague and Andrea, his wife of almost 40 years, did last weekend with their daughter, Cherilyn, son-in-law, Josh Noack, and 16-month-old grandson, Cru.

The Teague family—minus John and his wife, Maggie, who is due with their first child in early October—brought their DCB Performance Boats F32 catamaran with twin 1,200-hp Teague Custom Marine engines to the seventh annual Lake Powell Challenge at Antelope Point Marina in Page, Ariz., and had an amazing time.

“You know what? Lake Powell was awesome—it was so worth the 10-plus-hour drive,” said Teague, who is currently making a longer drive hauling his Team AMSOIL Skater from Michigan to Clearwater, Fla., for this weekend’s Super Boat International National Championships. “What I came away with is that the people of Antelope Point Marina pull out all of the stops; they roll out the red carpet unlike any event I’ve attended.

“We did a fair amount of boating, too, about 300 miles over two days,” he continued. “The best part was that our grandson went the whole way with us. We unplugged, relaxed and enjoyed everyone’s company. It was a fun, safe event in a breathtaking location.” 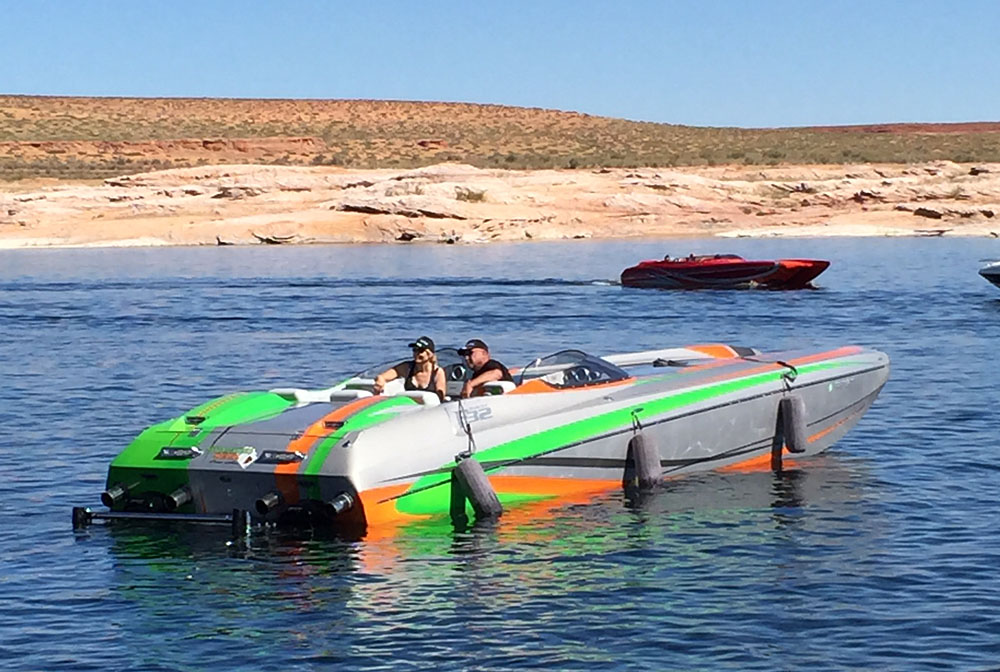 Fortunately the wrenching services of Bob or Josh weren’t needed so the trip really was like a vacation, despite the fact that they were sporting the TCM gear and hanging out with their boating friends and customers like they do at any other event or weekend in Discovery Bay, Calif., or Lake Havasu City, Ariz.

Teague said it was cool to see so many TCM customers at the event, which raised more than $200,000 for JDRF. Fresh off a trip to Missouri for the Lake of the Ozarks Shootout, George and Dawn Ogden ran their E-Ticket 29 Luxury Cat with twin TCM 1025 EFI engines, while California’s Lawrence Coelho brought his DCB F29 with twin 800-hp TCM engines to the Lake Powell Challenge. Charlie Brown, Randy Gibbons, Steve Lyman and more had Teague-powered boats. 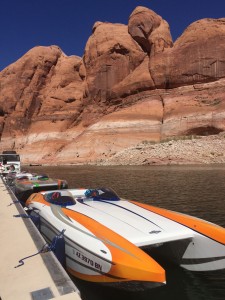 Lake Powell provides one breathtaking photo opportunity after another.

Overall the event was unique thanks to the first-class scenery and hospitality, according to Cherilyn Noack.

“I hadn’t been to Lake Powell since I was 5 years old and obviously a lot has changed,” she said. “The lake is lower and the boats are bigger. I was surprised by how rough and choppy it got, but it makes sense when it’s sheer rock on either side and the boat wakes just keep bouncing back and forth. We were able to find some clear, calmer areas especially on Friday when we ventured up to Rainbow Bridge with a couple of other boats. That was fun. It’s about a 1.25-mile hike each way and worth every step. It was so beautiful.

“Whether we were on the houseboat or sitting at the restaurant’s outside patio, Antelope Point Marina was such an enjoyable place to hang out,” she continued. “I have not felt such hospitality at an event in a long time—it was refreshing. I also enjoyed that it was so remote, meaning there were no other places to go or other things going on to distract people from the event.”

Noack said she was very impressed with the charitable side of the Lake Powell Challenge, which raised more than $200,000 for JDRF between sponsor packages and the live and silent auctions. She also said they didn’t think twice about bringing Cru with them to the event.

“His first boat ride was in our Malibu Echelon ski boat at two weeks old,” she said. “This is what we do; it’s who we are.”