You are at:Home»Boating»How To Hang On In Rough Water 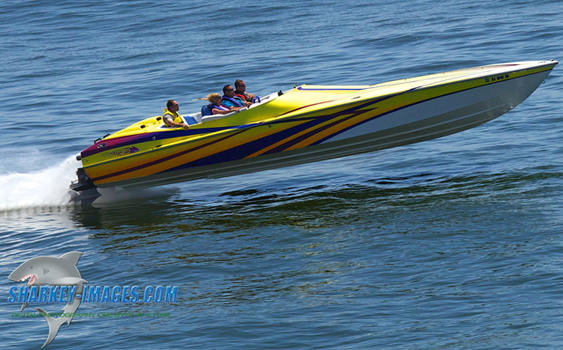 Attention, anticipation, balance and properly holding on can help protect you as a passenger. (Photo by Tim Sharkey.)

Well-known go-fast boat photographer Jay Nichols’ recent low-speed tumble, which left him with two fractured vertebrae, in a center console during the Boyne Thunder Poker Run in Michigan got me thinking about the perils of being a passenger when the water gets rough. The question of how to hang on in nasty conditions, especially if you don’t have your own bolster or—in the case of most catamarans—bucket seat, is a good one.

As it happens, I have a bit of experience as a passenger. During my 15 years at Powerboat magazine I was involved in testing more than 500 boats, and while I drove some of them for running photography, test drivers Bob Teague and John Tomlinson handled all the rest of the driving chores. That meant I was “meat in the seat,” the guy who guided them through test protocols, wrote down results in booklets—particularly fun in stupid-fast deckboats with zero protection from the wind—and generally tried to hang on for dear life when conditions got rough. And I’m happy to report that during all that boat testing the worst injuries I sustained were blisters between my thumb and forefinger.

1. Pay Attention: Yes, the poker run “crew” in the boat next to you is smoking hot, the hardware in the fleet is outrageous and the natural scenery around you is breathtaking. So take a breath and, like your responsible driver, watch the water ahead. That way, cross-wakes created by traffic, rollers from large vessels and potential hazards ahead (unseen shallows, broken-down boats dead in the water, etc.) that could force your driver to take evasive action such as turning hard or abruptly slowing won’t surprise you.

Another benefit? You can help the driver spot obstacles ahead. I once asked Teague if it bugged him when I pointed out boat traffic and other potential hazards while he drove. He replied, “No, but if we hit something and you say, ‘I saw that but didn’t want to bug you, I’ll kill you.’”

2. Anticipate Forces: You’re mid-pack in a poker run running 80 mph and see a mess of converging wakes created by the boats ahead. In a few seconds, you’ll have wakes coming at you from all sides. So what’s going to happen? Chances are pretty good that the lateral push will be anything from moderate to violent, even if your driver slows down. So it’s time to get ready for the force of the wakes acting on the boat, which will pitch you side to side, sometimes gently, others violently. Even with the most skilled driver in the world behind the wheel, those forces will come into play—it’s a matter of pure physics—and you want to be ready for them.

3. Find Balance: If you’re lucky enough to have a bolster or bucket seat in rough water, your balance issues were resolved when you got in the boat. (If you fall out of a bucket seat, that’s a pretty neat trick and you likely have bigger problems than balance.) With the bottom cushion dropped in a bolster, you can stand, lean back and let the piece of furniture take your weight. (I have heard a few experienced boat drivers tell their bolster passengers to “lock out” their knees. For any number of reasons I think that’s a bad idea.) But if you’re a standing passenger without a bolster or bucket, you need to be balanced to handle rough water.

Your best bet? Stand with your feet shoulder-width apart and your knees slightly bent—center of gravity slightly lowered. Think of your legs as shock absorbers. That means having just enough leg-muscle recruitment to absorb the impact as the boat launches and lands, and just enough flexibility to weight and unweight during the process.

4. Grab The Right Thing: A windshield frame is not a grab handle. It is not designed to support your body weight, much less a few times your body weight thanks to the G-forces that come with performance boating in rough water. And some windshield frames have hard, sharp angles. For these and other reasons, windshield frames are not meant for clinging to. Only grab handles are grab handles, and in the best case there will be two on the bolster ahead of you. Use them. Grab them firmly, because a casual grip could lead to an impromptu dip. If there are three passengers behind the bolsters, each outside passenger can share a section of his or her outer grab handle with the inner passenger.

Three more quick tips: First, don’t sit in rough water. A bench seat becomes a trampoline when conditions get nasty. (And if you’re dumb enough to ride on a sunpad, sooner or later you’ll prove Darwinian theory.) Second, let your driver know if he’s scaring you in rough water. Last, if your driver continues to scare you, politely ask him to take you back to the dock.