You are at:Home»Boating»New Miss GEICO Catamaran Debuts in St. Clair 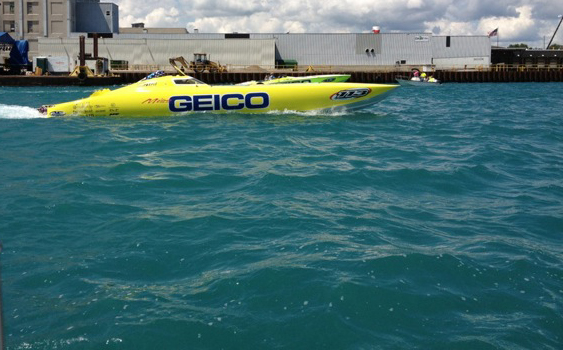 Like an aquatic phoenix, Miss GEICO rises from the ashes to ride again. (Photo courtesy of Marc Granet.)

In less than one month, the Miss GEICO Racing camp pulled together one of the greatest feats in offshore racing. From the devastating fire that destroyed its turbine-powered 50-foot Mystic Powerboats catamaran on June 30 in Sarasota, Fla., to the maiden race of the team’s replacement boat on Sunday at the AMSOIL Offshore Powerboat Series in St. Clair, Mich., the team has been working around the clock since acquiring its new 43-foot catamaran two weeks ago.

Originally a Victory Team boat for Union Internationale Motonautique (UIM) Class 1 competition, the 43-footer was later sold to and campaigned by the Martimo team. Now, bearing the signature Miss GEICO graphics, the boat is powered by a pair of Mercury Racing HP1075SCi engines. Although the team took second in the Offshore Powerboat Association Extreme class behind Cat Can Do, a 40-foot Skater with 1,300-hp Sterling engines, Miss GEICO driver Marc Granet said the team had a great time and learned a lot about the boat, including promptly meeting “Mr. Guardian” during testing on Saturday morning—his and throttleman Scott Begovich’s first time in the boat.

“We were supposed to get in some testing on Friday afternoon, but the flight Scotty and I were on was delayed because of weather in Detroit so we didn’t get in until that evening,” said Granet, adding that the team had extra pressure of a film crew shooting a national TV commercial for sponsor Royal Purple on Saturday to go along with testing from 10 a.m. to 8 p.m. “We had some water pressure challenges throughout the day on Saturday, but ultimately we got through those. It was so different in that boat. Not to mention we knew we were dealing with a notoriously fast and challenging racecourse with current changes on each end that have spelled defeat for many teams over the years.”

Continued Granet, “We didn’t know what to expect with the boat or the power, but we knew it would be exciting. The boat handled like a sports car. It’s significantly lighter than the turbine boat, and it clearly doesn’t have the power that boat had. We were able to push her a little bit in the race but a gearbox seal gave us a warning light so we backed out because we didn’t want to hurt anything. Obviously you want to do your best for your fans, for yourself and for your team, but when you realize how far we’ve come in such a short period of time, managing our expectations was important.” 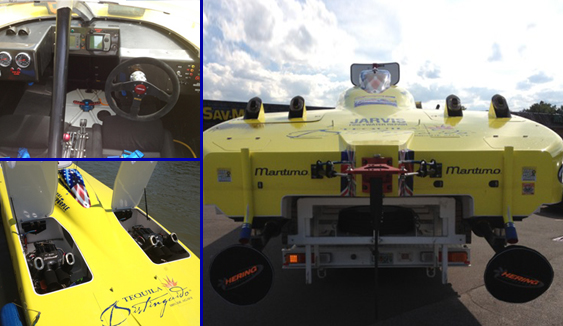 The new Miss GEICO inside and out. (Photos courtesy of Marc Granet.)

Thanks to crew chief Gary Stray’s tenure with the Victory Team, the team has great knowledge and performance data on the boat. Granet said the goals for St. Clair were to get more familiar with the boat and run conservatively since the team has yet to build up its spare parts supply.

“We took one step forward in St. Clair, and we’ll take another step forward this weekend in Michigan City [Ind.],” said Granet, who will be racing against three proven teams with more-powerful engines—Cintron, CMS and Gasse—at the Super Boat International race. “We know where we’re at and we know where we need to be in terms of the boat’s performance. We also know we are in a new boat so we have to be patient and take our time learning to run this thing.”

Granet, who said the team definitely missed the elaborate telemetry system it had on its turbine boat, was OK being the underdog for the first time in many years.

“Scotty and I quickly slipped back into that mode when we used to chase Dave Scott and Team CRC around the course years ago,” he said. “We know we’ll be up against boats with bigger power the rest of this season, but now we’re back to racing—focusing on making the best turns and capitalizing on another team’s mistakes. We’re the underdogs again, which is kind of nice.”