You are at:Home»Boating»Setting Up Boats for Acceleration 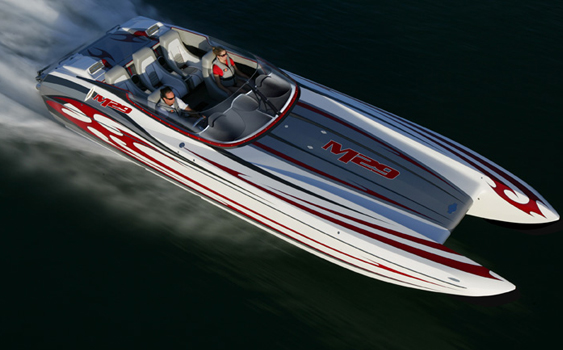 Troy Rapp of El Cajon, Calif., is having Dave’s Custom Boats build him an M29, like the one pictured. Rapp only boats on calm lakes and wants a strong acceleration.

Troy Rapp has owned eight high-performance catamarans built by Dave’s Custom Boats of El Cajon, Calif.  One common thread about each boat has been that it must have strong acceleration. “I like the feeling that puts you back in the seat,” said Rapp, 61, of Longview, Texas.

He isn’t concerned about top speed because he boats on relatively short lakes. “We have one that’s 13 miles long,” said Rapp. “We gear for the quickness and the acceleration. My boat will run 150 mph, but how long does it take to get to 150 mph?”

Rapp is not alone. Dave Hemmingson, president of Dave’s Custom Boats, said that he has a handful of customers who set up their boats for acceleration instead of top speed. For years, enthusiasts, members of the media and even boatbuilders have been wondering if the high-performance boating world has reached its limit in terms of speed. Thanks to the power output of engines like the Mercury Racing 1350, “pleasure” boats can run 180 mph out of the box. Most won’t admit it, but people who buy these boats are at least intimidated by these numbers and some are downright scared, so they set up their boats for acceleration.

Mike Fiore, president of Outerlimits Powerboats in Bristol, R.I., added, “The 1350 has so much power and so much potential that top speed isn’t a necessity anymore. Acceleration and getting there are just as important.”

For Rapp, rigging his boat for acceleration is also a safety issue. He demands that Hemmingson set up his boats for little or no bow rise on takeoff, primarily because of personal watercraft operators who seem to appear out of nowhere. “When a boat stands up and you can’t see the horizon and all you can see in front of you is the deck for 1 or 1 ½ seconds, that’s dangerous,” said Rapp. “I like to see where I’m going.” Additionally, an acceleration setup gives a boat superior mid-range throttle response, which would make it more drivable in crowded conditions and it’s always good to have power at your disposal when you need it to get out of a potentially hazardous situation.

Rapp is having Hemmingson build him a 2012 M29 with a single Mercury Racing 1350 and M8 drive. Because Rapp only boats on calm lakes, DCB is building the hull light. Rapp doesn’t bother with extras such as stereos with multiple speakers and amplifiers and he is estimating the weight at 1,700 pounds, which he says is about 15 percent lighter than a standard M29. Because of this, he’s moving around weight to balance the boat. The batteries will be in the middle of the boat and the fuel tanks are moved forward about 2’ from their usual position in an M29. Rapp has always put weight in the bow of his boats, usually in the form of bags of lead shot, and he’s planning to do the same in his new boat.

Normally Hemmingson would rig an M29 with the 1350 with a 1.4:1 gear ratio for all-around performance or 1.3:1 ratio for top speed. Rapp is getting the M8 drive with a 1.5:1 ratio (the engine turns 1.5 times for every revolution of the prop) and it will run either a 37” or 39” five-blade prop. For sheer acceleration, he could go with a 35” propeller.  And if he does, when he nails the throttles, he’ll get a rush like no other when he’s planted back against his boat’s bucket seat.