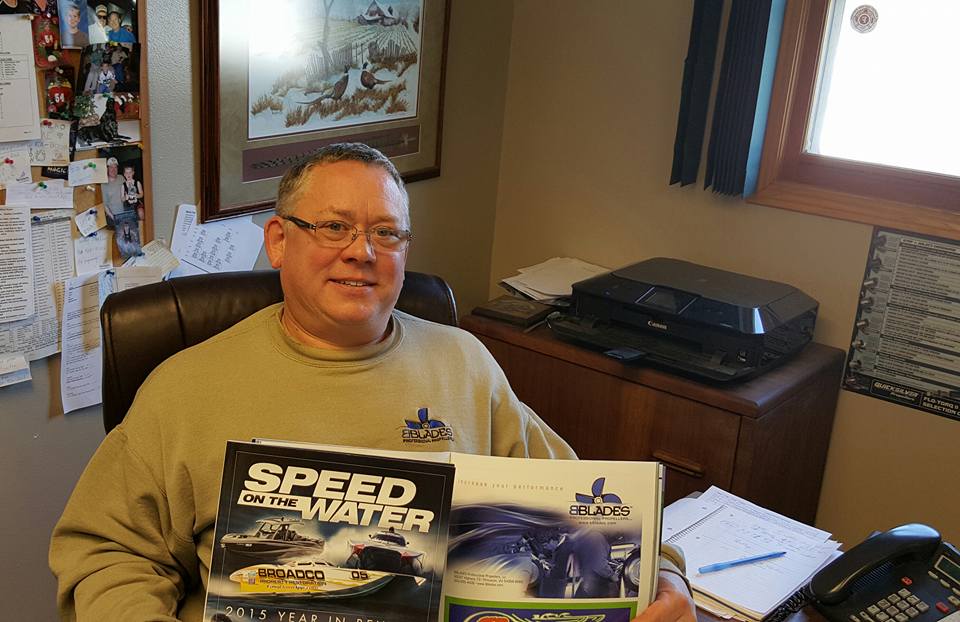 Done with his winter reading, Brett Anderson is encouraging customers to get their propeller work to BBLADES sooner rather than later. “There no shortcuts,” he said. “You can’t do seven or eight hours of work in two hours.”

Asked how business is going at BBLADES Professional Propellers in Princeton, Wis., company founder Brett Anderson paused for moment, as if he needed to catch his breath. Then he exhaled and chuckled.

“We are bombed with repair and lab-finishing work, which is a wonderful thing,” he said. “But every year at this time, I try to get out the word as early as possible: Get your stuff here now, because the turnaround time isn’t going to get much faster and we’re going to get even busier as the season progresses.

“There are no shortcuts,” he continued. “You can’t do seven or eight hours of work in two hours.”

Together, the group brings 90-plus years of combined experience to the game. Equally important to the BBLADES team is Katie Menting, who handles much of the phone and frontline customer service work in the office.

“Katie fields most of the phone calls, and she can answer the majority of questions as far as time frames for work and what we offer,” said Anderson. “Everyone here has the ability to field questions—I want people to understand that—and if we don’t have the answer immediately to a specific question we will get you the answer. If I’m not 100-percent sure about something, I’ll get you the answer.”

In addition to its current and growing propeller-tuning jobs, BBLADE is busy with gearcase blueprinting and modification, particularly as it affects skegs and nose cones.

“Without a doubt the skeg is the most important part,” said Anderson. “Blueprinting the skeg and nose cone, or ‘bullet’ if you like, does help with speed in some cases, but mostly what you get is improved handling—better tracking, crisper turning. If you gain two or three miles per hour, that’s a bonus.”

Starting with creating work order paperwork for each propeller when it arrives, the BBLADES staff follows a specific process with each job. From more top end to improved fuel efficiency, the customer’s performance goals, as stated in the order, are reviewed and if the BBLADES staff members have any questions they don’t hesitate to contact the customer. What they won’t do is push anyone ahead to the head of the line, even if offered financial incentive to do so.

“We are first come, first-serve,” said Anderson. “People are always trying to throw money at me to push them ahead. We don’t do that. We’ve never done that. It’s a bad idea.”

Instead, Anderson offers a good one. “Now is the best time to get things done before the 2016 boating season gets into full swing,” he said. “Smart customers are taking care of their cleanups and or adjustments before they actually want to get on the water.”