You are at:Home»Can't Wait»June Boom: Four Events Just In The Knick of Time

Did last winter suck or what? It’s not that I had to face it in person in any meaningful way—I live in Northern California where courtesy of another dry winter we’re looking at summer water rations. But thanks to endless complaining on Facebook by most of my friends who reside in the Midwest and the Northeast, I know this winter was a bad one.

For most of my go-fast boat-owning buddies who live for warm days on the water and consider winter nothing more than a necessary evil, spring—and technically we’re still in it—was no relief, as in most parts of the country that season sucked just slightly less than winter.

So right now there’s more than a little pent up demand for some good and fast times on the water that even the mighty Tickfaw 200 in Louisiana and Desert Storm in Arizona—both in spring—couldn’t dent. Here’s the good news: There is a lot of stuff, from offshore races to poker runs, happening this month. What follows are four June events that, whether or not you live in their particular area, should be worth your time

Viewing usually presents a challenge for spectators at offshore races, but the entire Lake Race course is viewable from any number of shoreline locations—and for those who bring their pleasure boats viewing from the spectator fleet is another option. With races on Saturday and Sunday—plus a “fun run” on Friday—there should be plenty to watch including what could be five big, fast catamarans in the “Run What You Brung” (don’t kill the messenger, I didn’t name the category) class. Five big cats, including no-love-lost rivals CMS and Miss GEICO, is a big turnout for any event. Guess that’s what the incentive of a single-class, $40,000 purse will do.

The Jackson River Rally Poker Run is back in the hands of its original organizers this years. (Photo by David Andrews.)

Back in the hands of its original organizers, the 2014 Jackson River Rally Poker Run looks to have a big showing this year. The six-stop run typically attracts some of the fastest recreational go-fast boats in the country—which means the world—and this year’s event will be no exception with reported commitments from many of the biggest names on the poker run scene. Among those folks you’re likely to have heard of who’ll definitely be there is Bill Pyburn, Jr., in the next generation of Pure Platinum, his one-of-a-kind Skater catamaran that by most accounts lives up to the hype it has generated. Jacksonville is “Pyburn Country” of sorts as it’s also home to Bill Pyburn, Sr., who is the event’s founder and primary organizer this year. 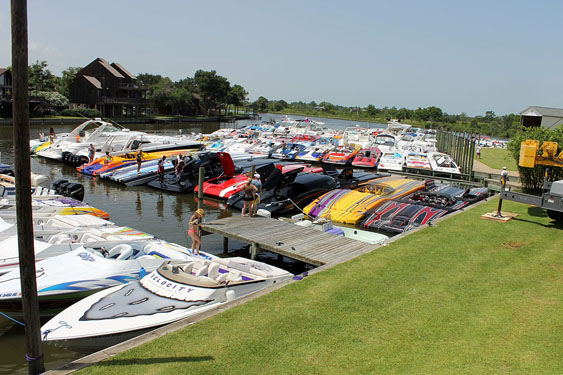 This is the dock scene from the annual “pool party” at a private home during Texas Outlaw Challenge. (Photo by Jason Johnson.)

Heading into its seventh year, the Texas Outlaw Challenge was one of the first poker run events to incorporate a separate top speed shootout as one of its activities for interested participants. The rather worthy and forward-thinking goal of the organizers was to take the pressure off for big-speed exhibitions during the poker run. Texas Outlaw Challenge events include a street party, the above-noted poker run and top speed shootout, an over-the-top pool party at the home of well-known performance boat/poker run enthusiast Kenny Armstrong (he owns the 48’ Marine Technology, Inc., Phantom catamaran), a post-run raft-up on Sunday and more. For good reason, this event just keeps on growing. 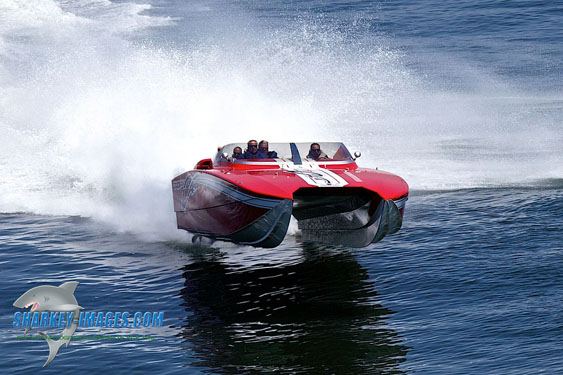 A poker run leads off the weekend action during the Atlantic City Festival of Speed. (Photo by Tim Sharkey.)

Held for the first time last year, the Atlantic City Festival of Speed returns to the Garden State with a winning combination of a poker run Friday, a day of boat rides for veterans from the Wounded Warrior organization and vintage/exotic car show Saturday and an offshore racing organized by the New Jersey Offshore Powerboat Racing Association and sanctioned by the Offshore Powerboat Association Sunday. Limited to just 50 boats, the poker run isn’t close to “big” by today’s standards. But it’s followed by a day of charity for a remarkable cause and heavy-hitting offshore raceboats—including Miss GEICO for likely the first and only time on the OPA circuit this season—duking it out the following morning and afternoon. That translates to something for everyone.