You are at:Home»Can't Wait»Key West Puts the World in World Championship 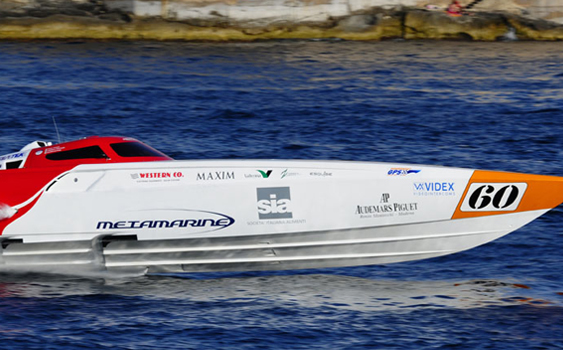 Designed and built by owner and driver Marco Pennesi, the Metamarine Corse TNT 46 has won a variety of international races. (Photo courtesy Metamarine.)

I’ll be boarding a plane a week from today and I have to admit I’m excited about the Key West World Championships for a much different reason than any of my previous trips to the southernmost point in the U.S. This year I’ll be reconnecting with some of my international friends, or amici miei if you speak Italian.

About a year ago I took a trip to Northern Italy for a Powerboat magazine article and enjoyed a few days with Marco Pennesi, the world champion owner and driver of the Metamarine Corse TNT 46 V-bottom, which Pennesi designed and built from his facility in San Benedetto del Tronto on the east coast of Italy.

Pennesi, his nephew Stefano Bonanno and some of the Metamarine crew and family members welcomed me like only Europeans do as we spent a couple of rainy days on Italy’s Lake Garda just outside of Verona running the company’s TNT 48 Monte Carlo—the pleasure boat based off the 46-foot race boat that won a couple of Powerboat P1 world championships in the Evolution class several years ago. I also got to ride shotgun in the race boat, which is powered by twin 950-hp twin-turbo diesel engines from Seatek. 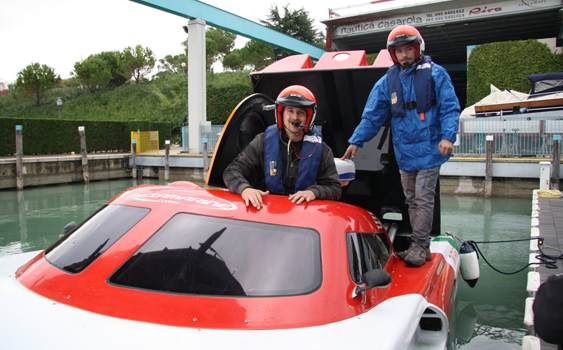 Jason Johnson climbs into the cockpit before going for a ride in diesel-powered Metamarine Corse TNT 46 V-bottom.

To make a long story short, I received an e-mail from Metamarine’s Giulio Brandimarti a few months ago that the team was coming to race in Key West and I was excited to hear that Pennesi and company were making the effort, not to mention the investment, to attend Super Boat International’s premier event. But I recently found out that Metamarine shipped its TNT 48 Monte Carlo to Miami to participate in the Florida Powerboat Club Key West Poker Run and will be on display in Key West all weekend. Even cooler.

Take it from me, the pleasure boat is worth a closer look. Just like the race boat, Pennesi, who is one of Italy’s top manufacturers of food processing machines, built the drives, transmissions, trim tabs and practically everything else on the boat. I was impressed with the boat’s stable yet agile ride on a choppy Lake Garda, as well as its fine craftsmanship—not a surprise considering the Italian pedigree. In a sense, it’s a good cross between a performance boat and a sport yacht. 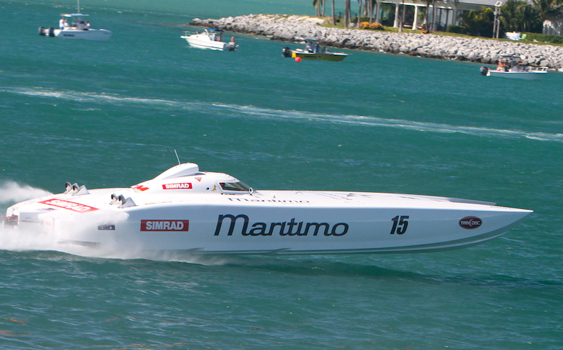 The Australian-based Maritimo Offshore team will return to Key West this year. (Photo by Rodrick Cox.)

But back to the race boat. I’d be surprised if the TNT 46 is the fastest in the newly formed Superboat Extreme fleet, but Pennesi is about outlasting the competition with diesel engines and a boat that crushes waves and carves turns. No matter what the outcome, I’m looking forward to watching the team run and hanging out with the gang afterward.

And here’s the best part about the Metamarine team entry in Key West: the Italian representation just adds to this year’s outstanding global presence. According to the current entry list, here’s a quick look at the international teams to look out for at the Key West World Championships.

Team Gasse’s Tor Staubo, of Oslo, Norway, will campaign two 48-foot catamarans from Marine Technology Inc. in the Superboat Unlimited class. In the same class, which also includes Miss GEICO, is the Spirit of Qatar, owned and driven by Qatar’s Sheikh Hassan bin Jabor Al-Thani and throttled by Steve Curtis of the United Kingdom. And although Gary Ballough, of Boca Raton, Fla., owns the boat, the Blacksand 32-foot Doug Wright includes driver Omar Danial, who is from Switzerland but resides in Dubai. 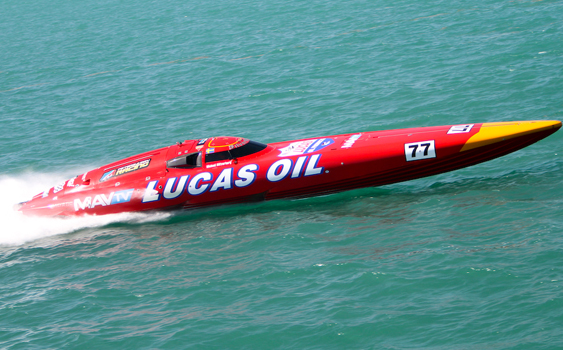 Racing the Lucas Oil MAVTV SilverHook, Nigel Hook and Michael Silfverberg will be one of four international teams competing in the Superboat Extreme class. (Photo by Rodrick Cox.)

A pair of Australians (Ross Willaton and Peter McGrath) will race the 41-foot Maritimo in the Superboat class, while the Superboat Extreme class will feature four international teams. Metamarine is one, along with the Ukrainian Spirit featuring Ukraine’s Viktor Shemchuk and Malta’s Aaron Ciantar and two Lucas Oil-sponsored boats. Nigel Hook and Michael Silfverberg, who hails from Sweden, will race the popular 44-foot SilverHook (No. 77), while Miles Dobson and James Sheppard, both from the UK, will compete in a Skater Powerboats V399 (No. 17).

If one thing’s for sure, the Superboat Extreme class should prove to be very competitive this year.

“We are expecting at least 10 boats in our new class,” said Hook, who is from the UK but resides in California. “Michael and I are looking forward to racing against a couple of our old European rivals, the Ukrainian team in their Maltese-built boat and the Italian team in their diesel-powered Metamarine boat, both of which are being shipped over from Europe. Also, thrown into the mix is the formidable English duo of James Sheppard and Miles Dobson.”

For those of who won’t be at the world championships, you can follow the races via live streaming at superboat.com.