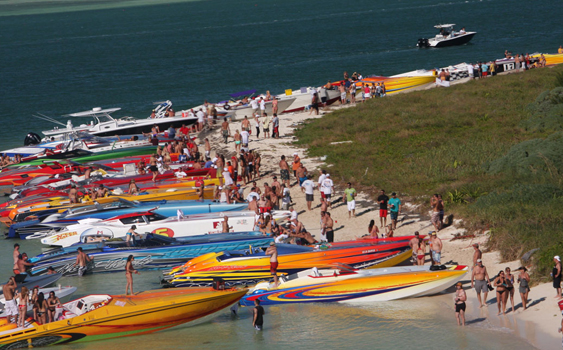 “I’m not saying that time ‘flew by,’ but the memories from the earlier days are still very vivid in my mind. It honestly doesn’t feel like it’s been 20 years—I can’t believe how much the event has evolved. We’ve overcome so many hurdles to keep the poker run safe and exciting while trying to make it so it’s not the same event every year.”

With less than a month to go until the Florida Powerboat Club hosts the Key West Offshore Poker Run for the 20th time (Nov. 6-12), club president Stu Jones summed up his thoughts on how far the event—arguably the most desirable run in the country—has come since he organized the first one in 1993.

Looking back now, Jones is glad he teamed with Jay Ross of Sonic Boats to organize the run to Key West for two dozen Sonic owners who wanted to drive their boats down the Florida Keys for the offshore racing world championship. Over time, the event developed into the all-encompassing, high-performance showcase it is today.

“I don’t take credit for the growth of this event—it’s the people who have attended the poker run, had a great experience and shared that with others,” Jones said. “From a pioneering aspect and a leadership aspect, I can take some credit. But without our members’ dedication, who knows where this event would be.” 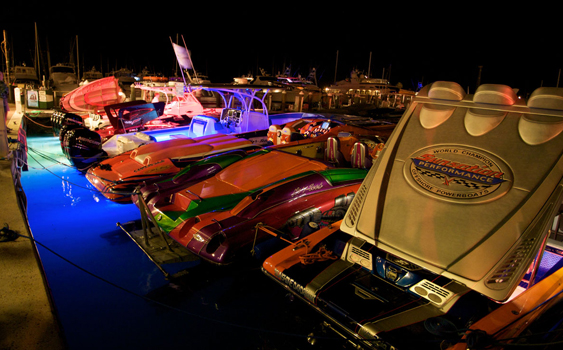 The show at the docks doesn’t end just because the sun goes down. (Courtesy Florida Powerboat Club.)

The member turnout appears to be strong again with more than 150 teams—a comfortable benchmark according to Jones—expected to make the run from Sea Isle Marina in Miami to Key West on one of the four departure days. As usual, the club is adding some new facets to the event, which stops for lunch at Gilberts in Key Largo every day. (On Thursday, the busiest day, a lunch stop at Postcard Inn in Islamorada is added to the schedule.)

One facet Jones is excited about is that the video and photography crew will be producing immediate content for the club’s website and social networks so that other boaters around the world who couldn’t attend can follow the course of events on a daily basis. Obviously any videos uploaded won’t be of the same quality editing the club is known for with its TV shows and event DVDs, but that’s acceptable for those types of updates.

Jones said the club is introducing a mobile message tool at the event as well. The system allows Jones or his staff to update members in real-time if there are any course changes, logistics issues, weather warnings, etc. That will probably come in handy if someone breaks down and needs a tow or a spare part. 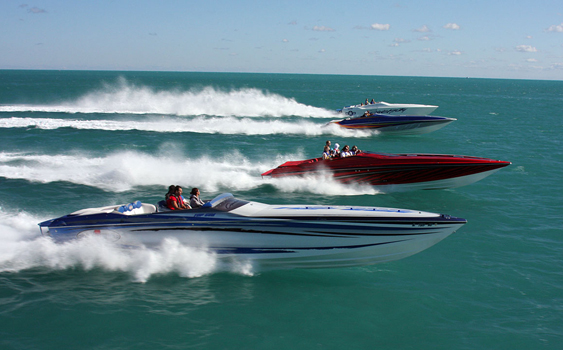 Cruising in picturesque water, a group of V-bottoms enjoys one of the wide-open stretches on the run to Key West. (Courtesy Florida Powerboat Club.)

“I know some people will be disappointed, but I don’t think I’ll need my bullhorn any more—the new system will be like a couple hundred bullhorns going off at once,” Jones said. “Another thing that’s newsworthy, and somewhat inspiring, is that we have a good amount of boat builders coming on board again. Mercury Racing is returning as the title sponsor, which is great, and I’m happy to see some brands that have taken a less active role in these tough economic times coming back. There will be some great new products on display in the poker run village this year.”

If you’re like a lot of enthusiasts in the country—myself included—you are counting the days until the milestone celebration kicks off next month. If you just can’t wait, maybe this link to some 2011 Key West Offshore Poker Run videos on the club’s YouTube page will help.