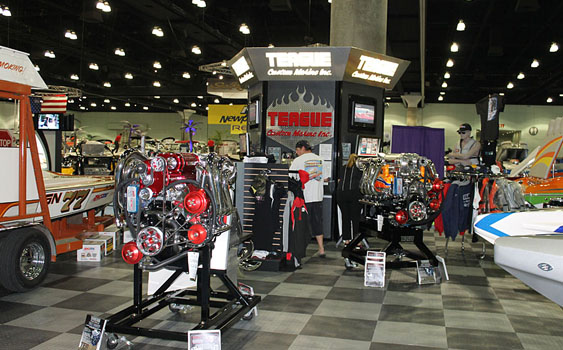 Between accessories, apparel, boats and engines, the Teague Custom Marine booth is always a happening spot at the L.A. show. (Photo by Jason Johnson.)

Although I am traveling to Miami on Wednesday for the 2015 Miami International Boat Show and much of my attention has been focused on that event—as well as wrapping up the latest digital issue of Speed On The Water magazine—I wanted to give some kudos to another National Marine Manufacturers Association show out on the West Coast.

Maybe you’ve heard of it—the Los Angeles Boat Show? Just kidding. I know the L.A. show is—or was—a pretty big deal for the industry. According to event organizers, this year’s show, which takes place February 19-22, is expected to be the best one since the days when it used to consume an upstairs and downstairs portion of the massive convention center.

“This year’s Los Angeles Boat Show is gearing up to be the best in several years,” said Show Manager Dave Geoffroy. “We have more boats, more accessories, two great venues and fun for the entire family. Plus, performance boats are back in a big way and with fuel prices down we are anticipating strong demand. This is the one show not to miss—more than ever it’s the right time to check out the boating lifestyle.” 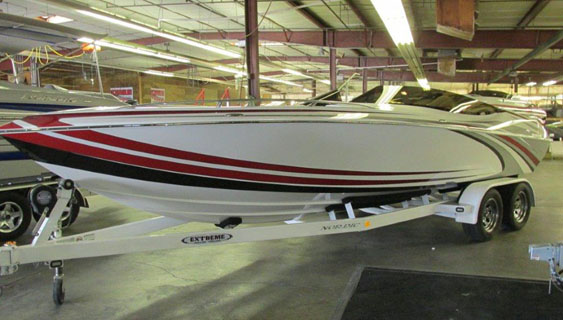 Nordic Boats is planning to have this walk-through 25 Rage on display at the Los Angeles Boat Show along with five other models. (Photo courtesy Nordic Boats.)

Teague Custom Marine’s Bob Teague, who will be a guest speaker on high-performance topics at the Discover Boating Center in the convention center, also is excited for the L.A. show—although he’s in Miami for a few days this week to check out the East Coast show.

“We’re seeing some resurgence in the performance market out here on the West Coast—in fact our phones have been ringing off the hook lately,” Teague said. “We’re hoping that we see a similar surge at the boat show next week.”

Along with the company’s large display, the Team AMSOIL offshore raceboat—a 36-foot Skater Powerboats catamaran—will be on display at the show, according to Teague. Last year the No. 77 boat drew tons of onlookers capturing photos and taking a closer look. I know because my father-in-law was one of those gawkers. 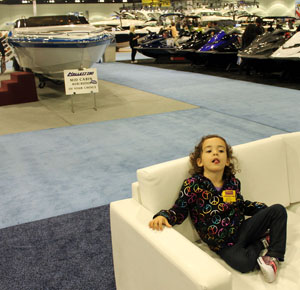 After my second daughter was born on the Friday of last year’s L.A. Boat Show, I took a break from the hospital and brought the older one to the show on Sunday. (Photo by Jason Johnson.)

Since I had already planned to skip Miami in 2014 because my wife was due within weeks of the South Florida show, I made plans to spend a day at the L.A. show checking out the latest and greatest performance boats and products on my side of the country. And while my plans weren’t entirely spoiled, my second daughter came five weeks early and the “after hours” arrangement with my friends from DCB Performance Boats and Nordic Boats went out the window.

Still, I managed to make it to the show with my father-in-law and then-3-year-old daughter in tow (read last year’s column). The good news is that definitely won’t happen again this year since there’s not another baby on the way. Obviously the fact that I’m writing about the L.A. show proves that I’m excited for it as well.

Not only will there be new boats on display from DCB (wait until you see the new M29 coming to the show as well as the M35 with twin 1100s), Nordic, Hallett Boats, Howard Custom Boats, Shockwave Custom Boats and other builders, if you’re in the mood to peruse various accessories, cleaning products and more, you should be pleased. From Driven products and Boat Bling goodies to complete displays from Livorsi Marine, Wozencraft Insurance and my friends at SpeedBoat magazine, there will be a lot to see and plenty of activities for the entire family.

Oh yeah, last but not least, I’d recommend that you purchase tickets online by February 18 and use the promo code TEAGUE15 to receive $3 off admission.