You are at:Home»Can't Wait»Looking Ahead To Havasu And New DCB M35

The annual Desert Storm Poker Run is less than two months away so it is obviously on the forefront of many people’s minds—mine included. There’s a lot to get done between now and April 22 since the speedonthewater.com promotional trailer with all-new gear is coming to Lake Havasu City, Ariz., with me, Matt Trulio, Pete Boden and a few of our friends.

In terms of preparation for the 22nd annual event what we have to accomplish pales in comparison to the team at Phantom Productions and the many supporters of the event that help make the poker run and its massive Street Party what it is—companies such as Kicker Audio, DCB Performance Boats, Nordic Boats, Teague Custom Marine, Mercury Racing, RiverDavesPlace, Eliminator Boats and many others.

As usual, I know the crew at DCB is going to be as busy as ever organizing what Trulio and I have more than once referred to as the DCB showcase. And I’m not just talking about the Street Party. The team from El Cajon, Calif., starts months in advance coordinating a community dock space, hotel rooms, hundreds of feet reserved along McCulloch Boulevard, apparel, demo rides, shootout participation and more.

And all while still building boats to be delivered before and even during the poker run. 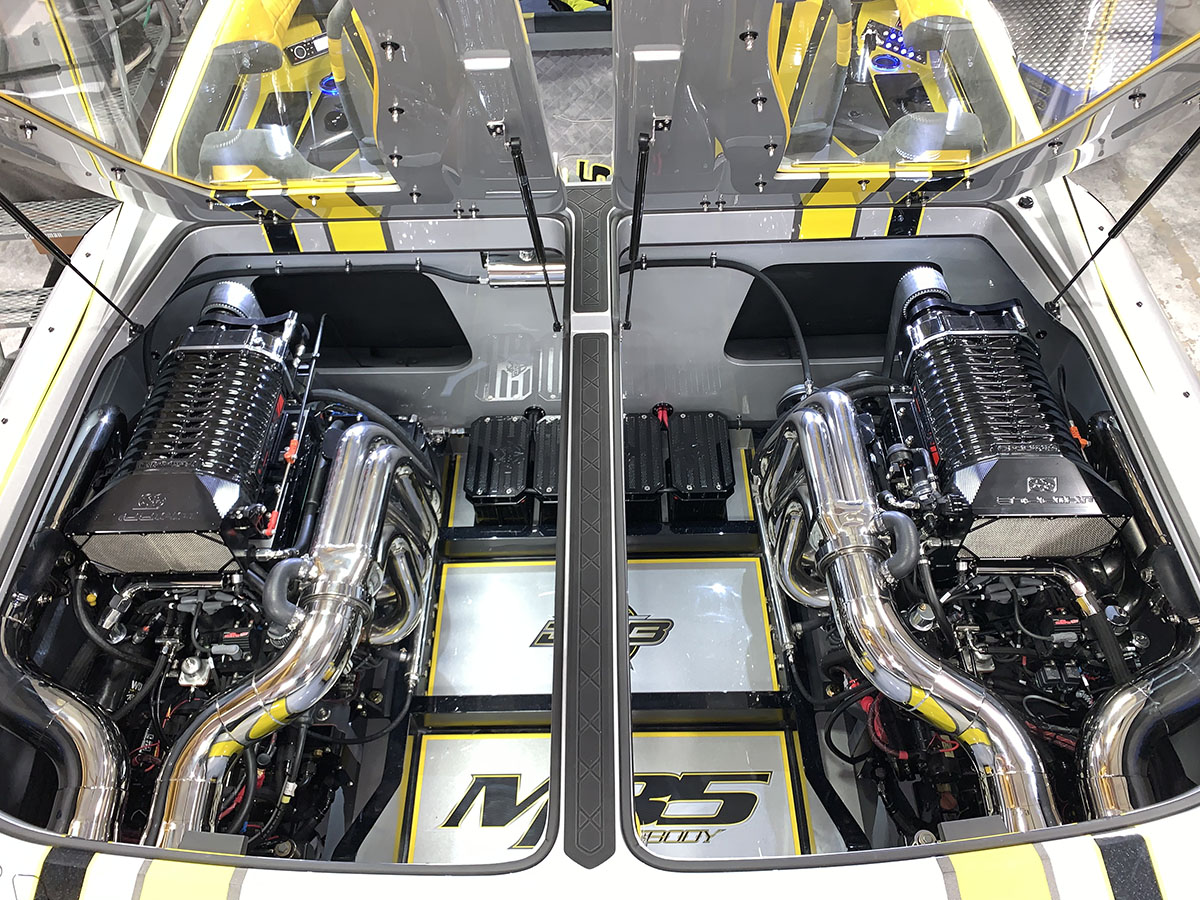 As usual, the pair of TCM 1450 EFI engines were rigged perfectly in the new 35-foot DCB catamaran.

I don’t know every DCB you’ll be able to see on the street party, but I can bet one of the showstoppers is sure to be the new M35 Widebody catamaran powered by twin Teague Custom Marine 1450 EFI engines that was on display at last month’s 2020 Los Angeles Boat Show. Although the 35-footer owned by Nevada’s Roger Primm wasn’t quite ready to hit the water before the show, the immaculate cat sitting on an angle anchoring the DCB display at the Pomona Fairgrounds was completed shortly thereafter and DCB’s Tony Chiaramonte and Jeff Johnston took it out for its initial water test and shakedown on Lake Elsinore a couple of weeks ago.

As expected, they were impressed with the cat, which is expected to top 160 mph.

Half-capped with a stainless-steel rubrail painted black, the gray, yellow and black M35 Widebody was built with DCB’s Vacuum Infused Resin process and balsa-cored with carbon-fiber and carbon-Kevlar inlays.

Along with the 75-percent Alcantara, 25-percent CoolTouch marine vinyl interior with matching under cuddy, DCB installed a color-matched carpet kit with shaved diamonds in the fabric and a Rigid LED interior package for the mood lighting, courtesy lighting and cupholders in the roomy six-person cockpit. Rather than going with gauges—something Primm, who has successfully raced everything from motocross to drag boats and drag cars, was fairly certain he wanted when he started the build—Primm was sold on the idea of the modern technology, opting for a pair of flush-mounted 9-inch Simrad displays and a Garmin 922 chartplotter in the center of the dash, plus two Garmin GMi20 screens in the back of the forward seat headrests. 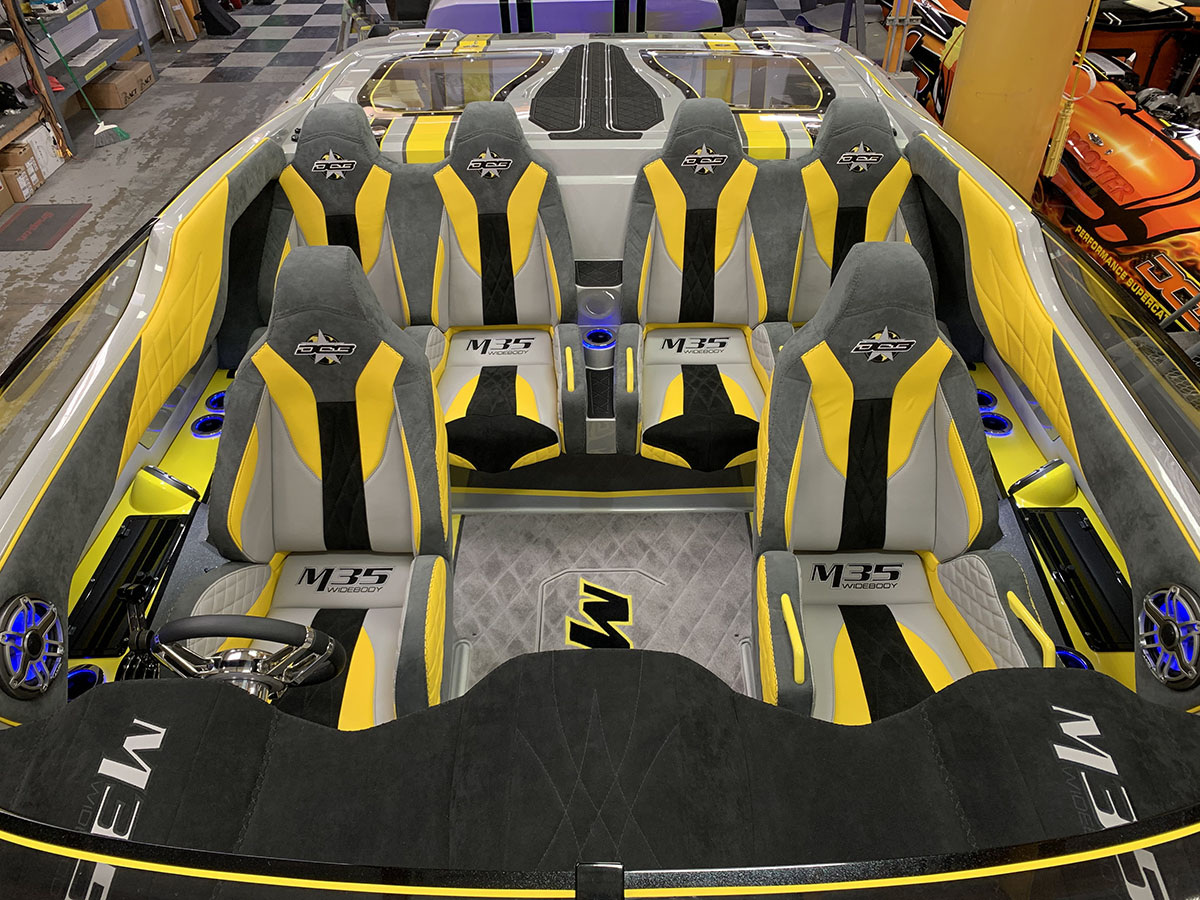 The fully loaded six-seat cockpit in the M35 Widebody was color-matched to the boat’s impressive gelcoat.

“The teams at DCB and Teague Custom Marine exceeded my expectations—they did such a fabulous job,” said Primm, whose previous pleasure boat was a sneaky fast Formula Boats 353 FAS3Tech with TCM 850EFI engines. “I’m a gauge guy, I’m old school I guess, but I figured I could try the electronics and see how it all works. It should be nice having everything on a single screen. And if I don’t like it, I can have it redone with gauges, right?” 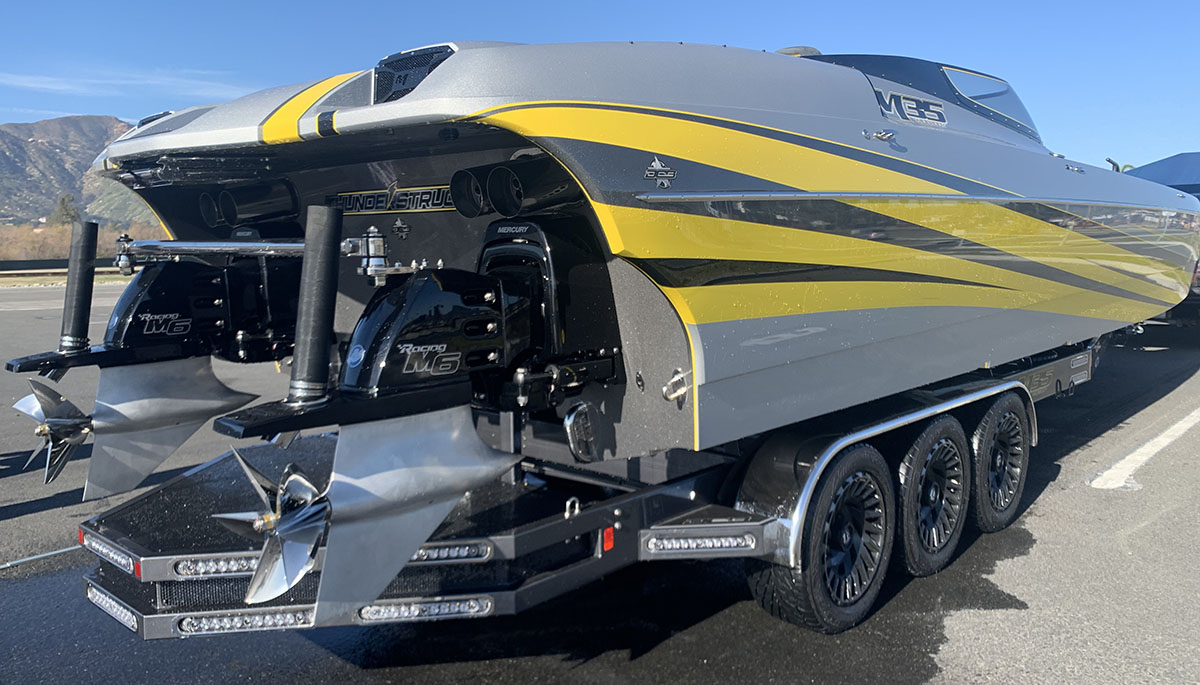 DCB utilized a pair of Mercury Racing M6 drives to put the 2,900 horsepower to the water.

Primm said he’s excited about learning to run the boat dubbed Thunderstruck with both Chiaramonte and Teague, who is recovering from surgery, at some point before Desert Storm. From there, Primm has an idea of some poker runs he wants to attend up and down the West Coast as he envisions splitting time between Lake Havasu and his home waters of Lake Tahoe.

“I’ve always been around fast things and mechanical stuff—and there’s nothing like driving a boat fast,” Primm added. “There’s so much feel to it, and if you don’t respect it, you could end up getting hurt.”

Of course, I plan to bring you more with Primm following Desert Storm and I’m hoping to catch him at some other events I plan to cover, including the Big Cat Poker Run in Discovery Bay, Calif., in August and the Lake Powell Challenge in Page, Ariz., in September. By that point, I’m guessing he’s going to have even more to say about the incredible boat, which sits on a custom triple-axle trailer from Adrenaline Custom Trailers.