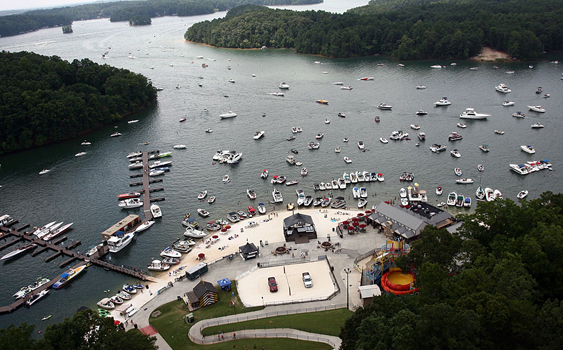 The Pirates of Lanier Poker Run on Georgia’s Lake Lanier is expected to be one of the biggest events of the year. (Photo by Jeff Gerardi/www.freezeframe.us)

Between planning our family’s 2014 calendar—which is going to be quite busy, but not as jammed with business travel thanks to the addition of our second girl in early March—and chatting with guys like Greg Harris (Cash Bar here on OSO) from South Florida and Nate Michel from Louisiana about their 2014 poker run schedules, it got me thinking about column ideas (I’m a writer, that’s we do).

But rather than live in the real world since I won’t be on the go too much in 2014, I figured it would be fun to play a “what if” game. What if I could attend 10 performance boat events this year—five I’d never been to before (red) and five of my favorites (green)—what would my calendar look like? Obviously this is only a wish list, and I’m limiting travel to the States or I’d be in Dubai or even Brazil at some point this year, but these are 10 events I wouldn’t want to miss.

Being able to touch and feel the latest and greatest from builders of boats, engines and so much more at the boat show is enough on its own. But throw in the Florida Powerboat Club poker run to Islamorada, where many of the showboats take to the water for the first time, and it’s hard to find a better boating experience.

Because this is only a five-hour drive from my house in Southern California, the Desert Storm Poker Run on Arizona’s Lake Havasu will be a reality for me again this year. I haven’t missed the event in seven years and don’t plan on missing it anytime soon. 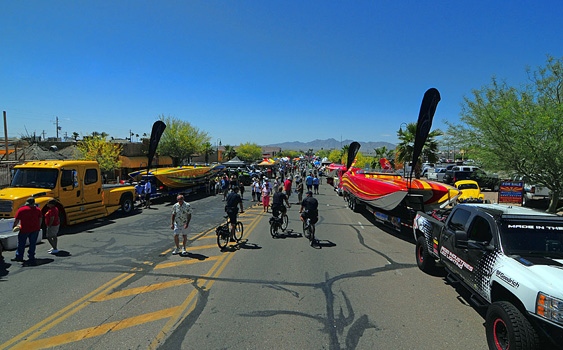 Because this is the last year at the Blood River Landing marina in Springfield, La., you know the Tickfaw 200 on the Tickfaw River and a half-dozen other waterways is going to be more fun than ever. And that won’t be an easy task as the 200-mile two-day run is unlike anything in the country.

Although Missouri’s Lake of the Ozarks isn’t new to me since I’ve been to the Shootout many times, going there for a different reason—the charitable military-focused Support the Troops Poker Run presented by MidwestBoatParty.com—would be an entirely different experience. The seventh annual event includes Friday’s poker run to a variety of popular destinations on the lake and Saturday’s “Rehab Day” at the Camden on the Lake pool.

Because of the timing and the anniversary, the 30th annual Suncoast Super Boat Grand Prix in Sarasota, Fla., is a definite can’t-miss event. Along with the Super Boat International competition on Sunday, the festivities surrounding the race include a fireworks spectacular on Thursday, the popular boat parade on Friday and a bikini contest, fashion show and racer meet-and-greet on Saturday.

After the overwhelming response to the event’s organization, accommodations and donations in 2013, making the trek to Buford, Ga., for the sixth annual Pirates of Lanier Poker Run presented by the Lanier Partners of North Georgia is a no-brainer. I can’t wait to see how much money the organizers raise this year.

Presented by the Tennessee Powerboat Club, the inaugural Old Hickory Fun Run in Nashville received rave reviews last year after Saturday’s lunch run from the Rudder at Anchor High Marina in Hendersonville, Tenn., to Nashville’s downtown riverfront area. Sixty boats were on hand the first year and organizers plan even more in 2014.

An impressive array of more than 100 boats were on hand for the Western New York Offshore Powerboat Association’s Buffalo Poker Run in early August, and I’m assuming the event, which is held in an area of the country I’ve yet to go boating, will be even better this year. 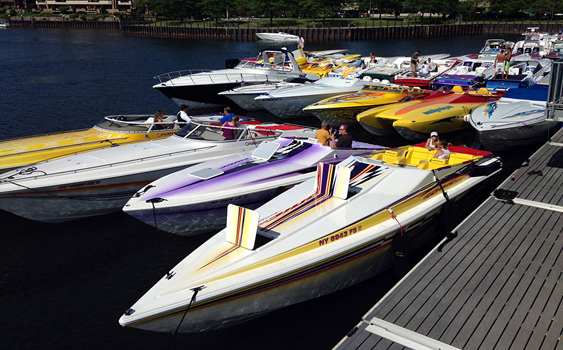 Organizers of the Buffalo Poker Run in Western New York are anticipating another 100-plus-boat turnout in 2014. (Photo by Tim Sharkey.)

Beginning with a Mini Shootout more than a week before the two days of top-speed runs on Saturday and Sunday, the Lake of the Ozarks Shootout has grown into a one-of-a-kind event that brings a significant boost to the Missouri lake community’s economy. Not only can you see a boat like My Way run 224 mph, the whole family can enjoy activities from a treasure hunt to a PWC fun run and a party in the park to a stereo shootout.