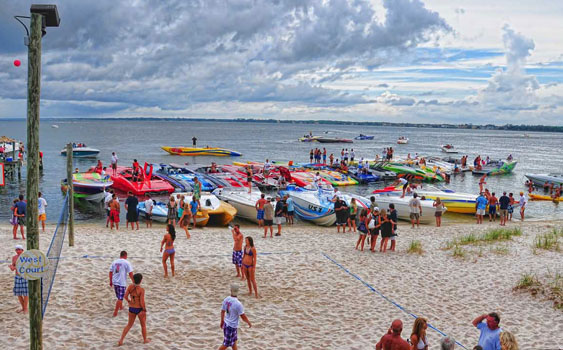 Here’s the thing about August just about everywhere above the equator: It’s bloody hot. No doubt, your best bet for staying cool in August is to be on, in or, at least, near the water. Fortunately, in the go-fast powerboat world, August offers several good events that put you right where you need to be. Here’s a quick look at three winners. And as it happens, they divide the country—geographically speaking—into three pieces.

With healthy registration happening already, the Emerald Coast Poker Run in the Destin and Fort Walton Beach, Fla., areas is looking to rally from last year’s run, which was not-quite-but-almost shut down by foul weather. The Emerald Coast event has pulled in more than 150 boats in its best years and Stu Jones of the Florida Powerboat Club , as well as the folks from the Emerald Coast Foundation are hoping it does just that this year. The run’s “start when you like, and take your time” format and—hence the name of event—emerald-hued water are among the star attractions of this event. 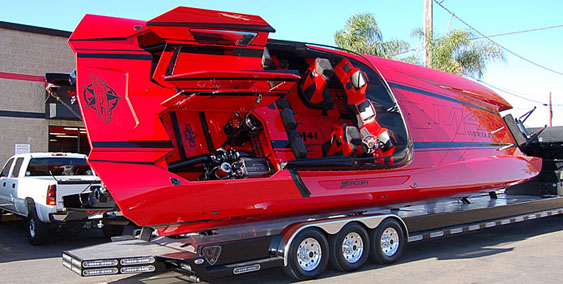 Hardware such as this DCB M41 catamaran is everywhere at the Big Cat Poker Run. (Photo courtesy Dave’s Custom Boats.)

On any given summer weekend, there are at least two worthwhile events happening in the performance-boat world—that’s a fact. So, while the Emerald Coast Poker Run is off and running, the Big Cat Poker Run—just 3,000 miles to the left—will be happening in Northern California on the Sacramento River Delta outside of Discovery Bay. The blue Delta water is pretty far from emerald green, but the maze of waterways that takes participants from Discovery Bay and eventually to Stockton for a killer lunch is spectacular, as is the go-fast boat fleet. The Discovery Bay community’s catamaran and V-bottom fleet is a match for any fleet, anywhere.

Not only will Captain Ron’s be the place to be for Saturday and Sunday’s Lake of the Ozarks Shootout top speed runs, but the restaurant in Sunrise Beach, Mo., will be the final stop for Friday’s poker run this year. (Photo by Jason Johnson.)

Billed by its organizers as “the largest unsanctioned powerboat race in the country,” Missouri’s Lake of the Ozarks Shootout, which is all about top speed on a liquid-mile course, is arguably the most important event of the go-fast boating season. (And of course, there is plenty of argument on that subject.) But it doesn’t matter whether you’re there to watch catamarans pass the 200-mph mark or pontoon boats run half of that, the Shootout is endlessly entertaining and fun. Sure, the 50-foot turbine-powered Mystic My Way catamaran, which holds the course record at a frightening 224 mph, won’t be there this year. But another 50-foot Mystic cat, the Spirit of Qatar team’s Al-Adaa’am 96, with 3,000-hp turbine engines, will be. So, who knows what will happen with “the big number”? Plus, the Shootout never fails to attract an array of piston-powered hardware in front of the largest spectator fleet for of any powerboating event.