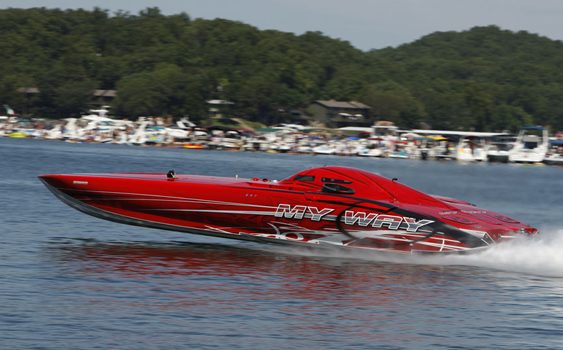 The defending Top Gun champion from the 2011 Lake of the Ozarks Shootout, Bill Tomlinson is planning to return to the event this year in My Way, his 50-foot Mystic Powerboats catamaran. (Photo courtesy of Robert Brown.)

A little more than 11 months ago I wrote my column (read it here) on why I couldn’t wait for the 25th anniversary of the Lake of the Ozarks Shootout. Well the event is just around the corner and I can hardly contain myself. The hype is building and I don’t think I’m going to be disappointed, especially considering the incredible gathering of jaw-dropping hardware expected to attend the week-long event (Aug. 16-25).

Well there is one thing that’s somewhat disappointing—the 2012 Top Gun champion won’t be returning as Nebraska’s Greg Olson officially retired after running his 36-foot Eliminator Boats catamaran 192 mph to wow the Shootout spectator fleet. That said, Olson would be facing a difficult task to defend the Top Gun title with the 2011 champion expected to return.

In a phone call on Tuesday, Bill Tomlinson confirmed that he’s planning to go after the Shootout record in his turbine-powered 50-foot Mystic Powerboats catamaran My Way. In 2011, Tomlinson and throttleman Ken Kehoe recorded a course-record-tying 208-mph run out in front of Captain Ron’s, the location of the Shootout since 2008.

“It looks like everything is a go for the Shootout,” said Tomlinson, who will be running his boat at this weekend’s 1000 Islands Poker Run on the St. Lawrence River in Kingston, Ontario. “We’re looking forward to returning to the event.” 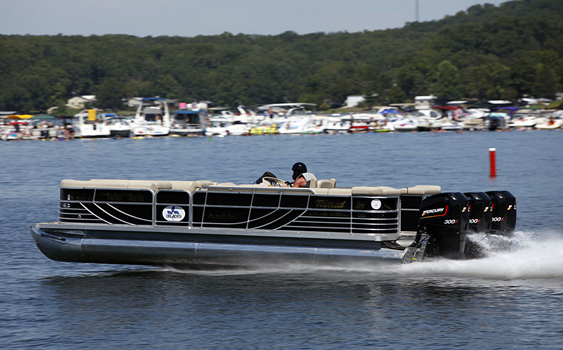 This year, Brad Rowland hopes he can best his record-setting 112-mph top speed set in 2012 in his triple-engine South Bay pontoon. (Photo courtesy of Robert Brown.)

Between phone calls, text messages and Facebook chats, I was able to communicate with many of the competitors who are preparing for the 25th annual Shootout. And guess what? There’s going to be some serious speeds laid down this year based on the boats I know are coming. I guess now is as good a time as any to apologize in advance for any boats I missed.

Tom Borisch, owner of the turbine-powered 50-foot Mystic Low Altitude, is sure to be one competitor to watch as he confirmed he’s bringing the former JBS Racing cat that he recently converted into a pleasure boat. I don’t know for certain if any other Mystics are expected to run, but I know that the boys at Lightning Performance Group are doing their best to get Don Onken’s 50-footer with four 1,700-hp engines ready for the event. 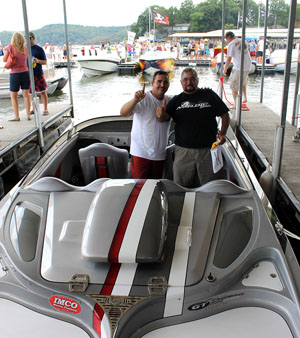 According to Reggie Fountain III of Real Fast Marine, he and Randy Kent, owner of Marine Concepts, are going to run Kent’s 44-foot Marine Technology Inc. catamaran. Earlier this year, Fountain completed a complete re-power of the former Budweiser Select boat, swapping out the rudder-style setup with a pair of Mercury Racing No. 6 drives to complement the “bumped up” 1200SCi engines. Fountain doesn’t know how quick they can get up to speed but he expects to put up a big number as the boat has 190-mph-plus potential.

Kent’s boat won’t be the only MTI on hand as the Wentzville, Mo., company always has a strong turnout for the event. Along with a half-dozen other customer boats, which may or may not make a pass in the Shootout, MTI may have a “surprise” up its sleeve, but it is going to come down to the wire.

Another interesting storyline is the return of a pair of friends, Louie Marchese and Ivan “Buck” Stracener. After battling each other for years in a V-bottom class, Stracener, who lives in California, bought a 28-foot catamaran from Nordic Boats that he and Marchese, who lives in Illinois, ran up to 138 mph and 148 mph to win Stracener’s class in 2011 and 2012, respectively.

Stracener is returning this year with the goal of breaking the 150-mph barrier with Marchese on the throttle again. This year, though, Marchese will be throttling his own catamaran as well—a new Skater Powerboats 338 “Fat Boy” model with a pair of 1,200-hp engines from Young Performance Marine (read his story here). All eyes are sure to be on Marchese and his boat, which features a pair of Arneson ASD7M surface drives and is expected to run upward of 170 mph.

Another notable Skater that should be at the Shootout, barring any setbacks in testing this weekend, is the original 40-foot Predator from 1991. According to Gary Smith, a veteran of the Shootout who owns the latest 40-foot Predator Skater, he and Vern Gilbert of West Coast Drives will attempt to put up a big number in the boat, which features twin 1,700-hp engines from Brummett Marine.

John Caparell will be coming from San Diego in an effort to improve upon the impressive 113-mph top speed he recorded in 2012 in his Doug Wright West 32 Poker Run Edition cat with twin Mercury OptiMax 300XS engines. Also coming from the San Diego area is the crew at Dave’s Custom Boats with its all-new M41 Widebody model with twin Mercury 1350 engines. The stunning hot-rod-red boat is sure to stand out in an impressive fleet of boats.

In the V-bottom classes, it sounds like Outerlimits Offshore Powerboats is going to have a strong showing highlighted by the company’s new Super Leggera 52 with twin Mercury 1650 Race engines. Dustin Whipple of Whipple Superchargers confirmed he will be bringing his new Super Vee 43 with a pair of 93-octane 1,375-hp engines.

Finally, in the fun-to-watch pontoon class, Brad Rowland of Illinois is returning to the Shootout for the 10th time to run his triple-engine South Bay model. While he’s just beginning to test, Rowland said he is shooting to beat the 112-mph record he set last year.

There’s no denying the excitement surrounding the Shootout this year. I think Marchese summed it up best when he said, “It’s the 25th anniversary so I guess it’s time to turn it up a bit.”