The story of Hustler Powerboats founder Paul Fiore, who died late last month, is a microcosm of the highs and lows of 2019. The 76-year-old father of Mike Fiore lived long enough to see the next chapter in Outerlimits Offshore Powerboats—the company his son founded—begin to unfold at the Bristol, R.I., company’s inaugural Factory Fun Run in August. Through tragedies that included the death of his son in 2014 and Outerlimits company president Joe Sgro three years later, Fiore had watched Outerlimits overcome dark times and reach its 20th anniversary. The standing ovation he received during the Saturday night dinner moved him and pretty much everyone else attending to tears.

And then all too quickly, Paul Fiore was gone.

Without question, this was a year of celestial highs and benthic lows. Jason Johnson, my fellow offshoreonly.com columnist and speedonthewater.com partner, have been revisiting it all as we put the final touches on the 2019 Speed On The Water Year In Review print magazine, which goes to the printer in less than two weeks. In the process of putting together what will be our fifth annual issue, we’ve looked at every major go-fast boating event, new model release and significant news story that defined the year. So it’s fair to say the material is fresh to us.

As we have for the past several years on offshoreonly.com, each of us has chosen five big stories from 2019. (I actually get six if you include the Fiore/Outerlimits story above.) Johnson’s “Top 10” story will run tomorrow. 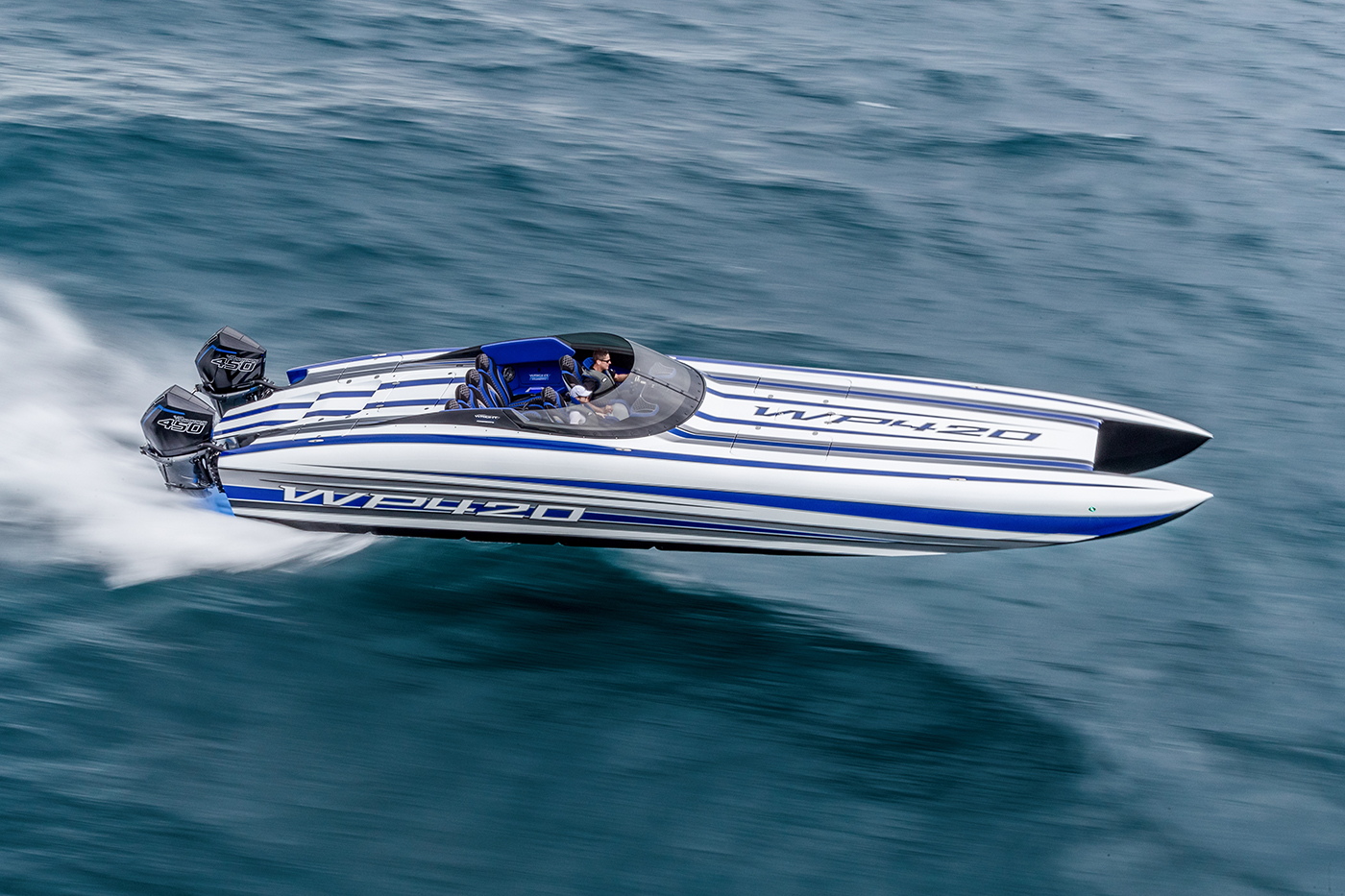 Mercury Racing’s 450R outboard was the hottest engine release of the year.

Almost no one was surprised but almost everyone was impressed—that’s the book on the release of new 450R outboard engine. The supercharged V-8 had been the grist of the go-fast boating rumor mill for months. And yet its arrival was anything but anti-climactic. So hot is the 450-hp outboard that folks such as Brett Manire of Performance Boat Center haven’t sold a new sport catamaran with anything other than 450R power since it was introduced. At almost $60,000—roughly $20,000 more than the six-cylinder 400R—the 450R doesn’t come cheap over its 400-hp counterpart. Then again, it delivers 40 percent more torque and an incredible V-8 roar. 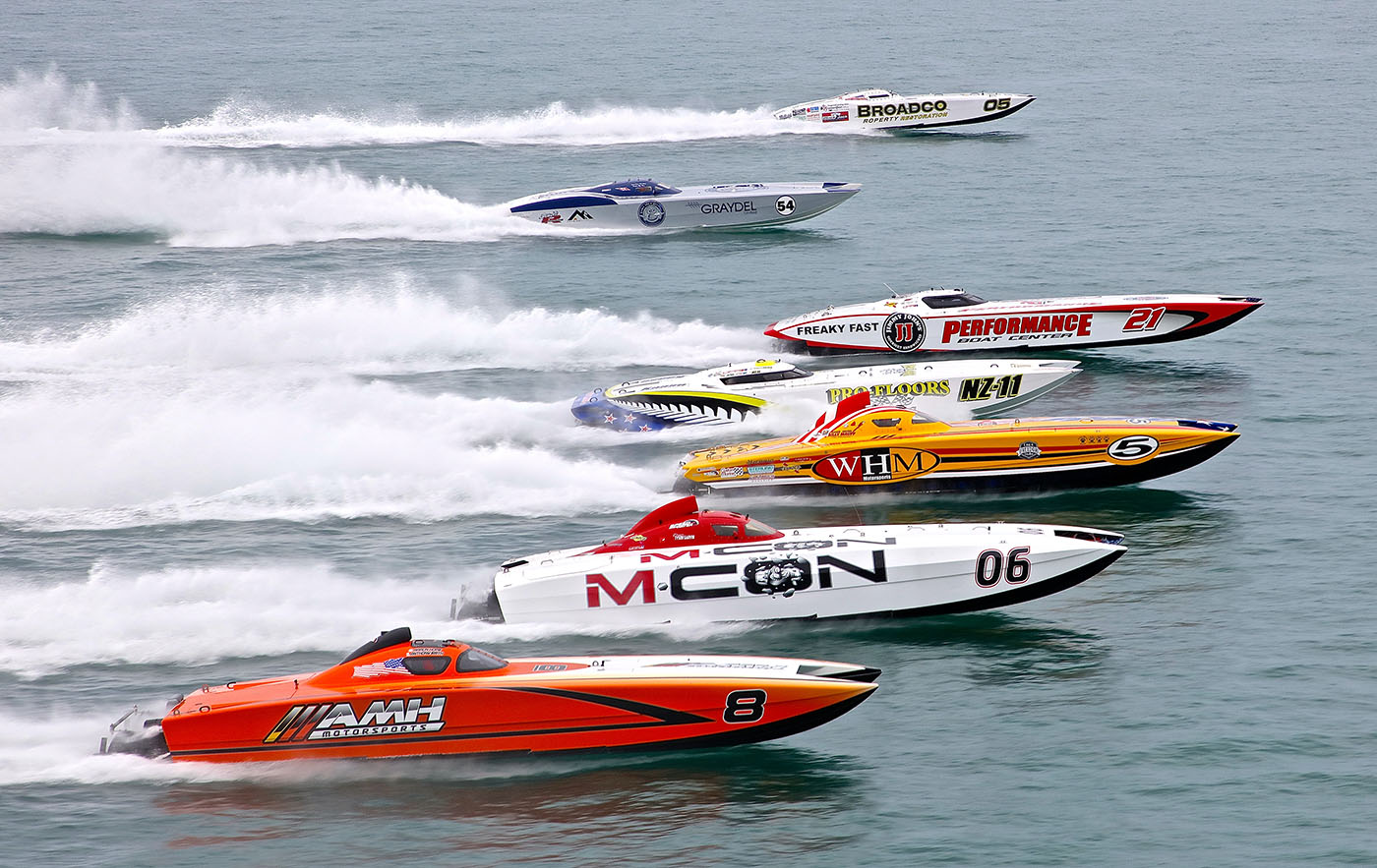 Even with plenty of racer and fan support behind it, there was no guarantee that the inaugural six-race American Power Boat Association Offshore. Championship Series would succeed. Offshore Powerboat Association head Ed “Smitty” Smith and Powerboat P1’s Azam Rangoonwala, who joined forces with six dedicated venue representatives to produce the circuit had never worked together. Their organizations are distinctly different. And it all came together with record turnouts at reach race site and best offshore racing competition since the early 2000s.

How hot was the outboard engine-powered sport catamaran market in 2019? MTI, which introduced its 340X model in 2016 and added a 39-foot version in November, cannot build them fast enough. In just two years, Performance Boat Center has completed more than 20 Wright Performance 360 catamarans and added a 42-foot version this year. DCB Performance Boats is building a true tunnel 37-footer. Fountain Powerboats has a new 34-footer. Outerlimits Offshore Powerboats has a 36-footer in the works. And the release of the 450R outboard in Mercury Racing has only the fanned the flames.

Loss Of A Legend

A colorful character with a formidable list of accomplishments, Italian Fabio Buzzi and his endurance-racing teammates Luca Nicolini and Eric Hoorn died in mid September when their vessel struck a dam after dark while they were attempting to establish a new Montecarlo to Venezia record. The 76-year-old Buzzi was the founder of Italy-based FB Design Group, which specialized in creating high-performance Rigid Hull Inflatable vessels from 10 to 55 feet long, as well as Seatek Diesel Engines. During his tenure, FB Design boats won 52 world championships, the Harmsworth Trophy seven times and have set 40 world speed records. Buzzi himself won 10 world championships. Said Mystic Powerboats founder John Cosker, who worked with Buzzi at Rolla Propellers, “I learned more about designing and building boats from Fabio Buzzi than anyone else in the world. He could design, build and race boats. There aren’t many people like that around anymore. He knew more about designing boats than anyone I have ever met.”

After a significant health setback, Peter Hledin (center) of Skater Powerboats is back at work. Photo by Pete Boden/Shoot 2 Thrill Pix.

Closely held as it was, the news that Skater Powerboats founder Peter Hledin had suffered a stroke rocked the high-performance marine world and left observers wondering what would become of the legendary Douglas, Mich., custom catamaran and V-bottom company he founded more than 40 years ago. But Hledin is a tough as they come, and the 67-year-old worked his way back through challenges that included relearning to speak and intense daily physical therapy. Just four months after he entered the hospital and those close to him weren’t sure he’d ever leave it, he was back on job. “Since I’ve been back, we’ve been working on our new 55 a new 32 and a new 29,” he said. “We are not slacking off. We’re still making new models based on our own designs.”