You are at:Home»Community»A Reason to Smile 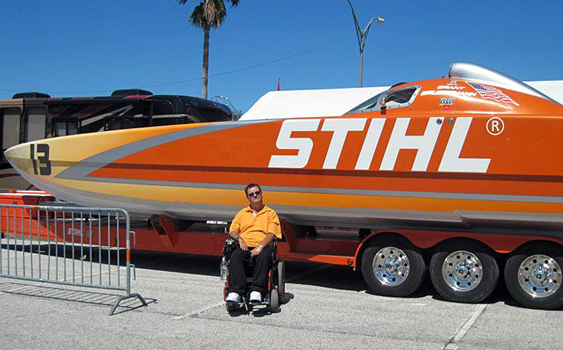 On any given weekend you’ll find Christopher Kuster at the historic Tarpon Springs Sponge Docks completing his next work of art and showing off his latest paintings, many of which capture the essence of the Florida coast in vibrant watercolor and oil. You’ll also find a good mix of cartoonish art featuring hot rods and powerboats—two of Kuster’s favorite things.

As you can see from the included examples of his artwork, the self-proclaimed horsepower junkie offers a fresh, fun perspective on gas-guzzling machines. What you can’t see in the art—the fact that Kuster is a quadriplegic who paints with his mouth—is even more impressive. Yes, he uses his mouth to draw and paint. Just don’t make the mistake of saying to him, “Wow, I couldn’t even do that with my hands,” because—as he told me—if he had a dollar for every time he’d heard that, he’d be a rich man.

Instead he’ll settle for being the “Paint by Teeth” man. A member of the Mouth and Foot Painting Artists (MFPA), an organization owned and run by disabled artists with European roots dating back to the 1950s, Kuster is a C5 quadriplegic who was injured in a shallow water diving accident in 1992—just two weeks before his 22nd birthday. He started painting more than 10 years ago and more recently, as in the past few years, he began the motorsports endeavor, Motor Mouth Studios. 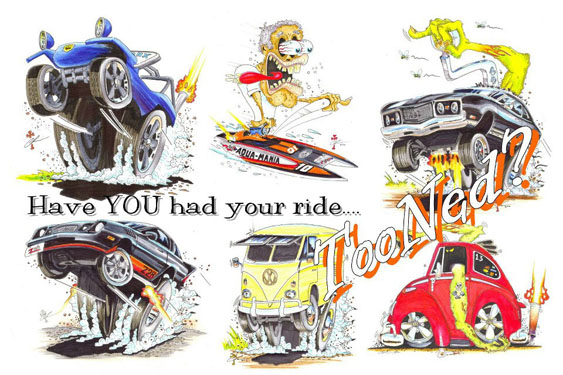 Kuster’s “Tooned” style of art dedicated to motorsports is quite a departure from his watercolor and oil-style paintings.

With the catchy “Have you had your ride Tooned?” slogan, Kuster has turned his passion for dragsters, offshore boats, hot rods, Volkswagens and more into an artistic avenue. For Kuster it’s the best of both worlds. Not only does he get to stay busy and make some money, he’s been able to paint for people he admires. 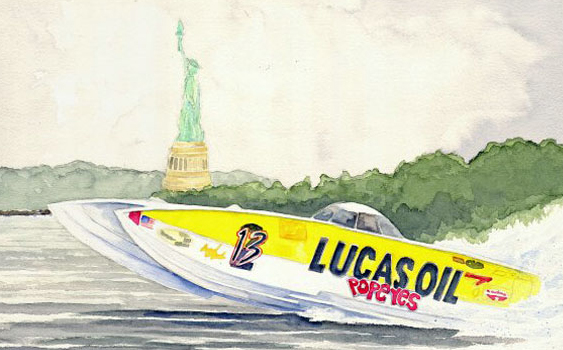 “I’ve always enjoyed watching the offshore races in Clearwater and Sarasota—I totally get a charge out of seeing and hearing the boats,” said Kuster, who has painted for offshore race teams such as Aqua-Mania, Instigator, Popeyes, Team STIHL and more. “I love the water and I love boats. They’ve been part of my upbringing. Tarpon Springs is a coastal town with a deep Greek history…boats are a daily occurrence here. Before I got hurt I was always outside and around water whether it was boating, surfing, scuba diving, camping or snorkeling.

“I’ve been in my chair for 20 years—this is who I am so I make the best of what I’ve got,” he continued. “I have my setbacks every now and then but I try not to get down. Fortunately with an organization like the MFPA, I’ve been able to sell my artwork all over the world. I thought I had it bad and then I saw people painting with their feet. It’s a super neat organization.” 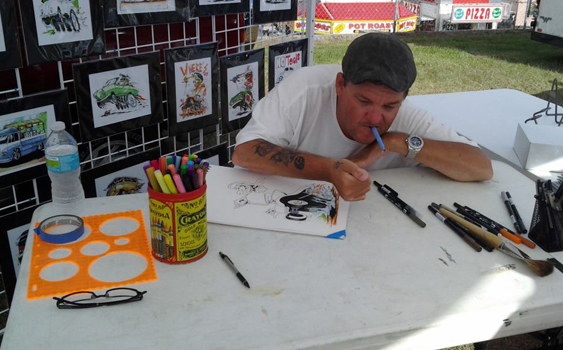 Injured in 1992, Kuster is a C5 quadriplegic who can often be found at Tarpon Springs Sponge Docks working on his scenic watercolor paintings or his motorsports cartoons.

Kuster is paralyzed from the chest down, meaning he can breathe on his own and control the movement of his shoulders and upper arms. Through the use of a special brace strapped on his arm, Kuster said he can hold a fork, brush his teeth and even use the end of a pencil to type computer keys one at a time. Still, given that he paints as well as he does using just his teeth and mouth is incredible. The fact that he spends some of his time painting boats makes it that much cooler.

“I’ve met some really nice people through offshore racing who always make me feel welcome at the races,” said Kuster, who lives with his fiancé Theresa. “That whole lifestyle is awesome. I can’t wait for the races this year.”

The Super Boat International series rolls into Clearwater on Sept. 27-29. In the meantime, if you’re interested in having your boat Tooned by Kuster, you can contact him via his website.