You are at:Home»Awesome»Busy As Usual at Teague Custom Marine

Whether it’s a Fountain or a Skater or something not nearly as familiar, Teague Custom Marine can take care of pretty much any boat.

As usual, a trip to Valencia, Calif. — the home of Teague Custom Marine — left me with plenty of story ideas for this month, next month and even next year. For example, George Ogden, a performance boater I’ve met several times between the Desert Storm Poker Run in his hometown of Lake Havasu City, Ariz., and the Lake of the Ozarks Shootout in Missouri, had his E-Ticket Performance Boats 29 Luxury Cat in the shop for an engine refresh and some transom and exhaust work.

After refreshing the engines from TCM 1025s to TCM 1100s, the team is rebuilding the IMCO Marine drives and completing an exhaust hole relocation along with a “laundry list” of gelcoat and fiberglass reinforcements between the stringers, bulkheads and transom. Once it leaves TCM, the boat is headed to ARKO Upholstery in Lake Havasu for an interior update. Ogden’s boat is definitely one I will be seeking out at Desert Storm in a month.

Aside from seeing the Teague family and the rest of the TCM crew whenever I stop by the shop, my favorite thing about visiting is checking out the variety of boats inside and outside the more than 30,000-square-foot facility. The assortment of engines is always cool, too. 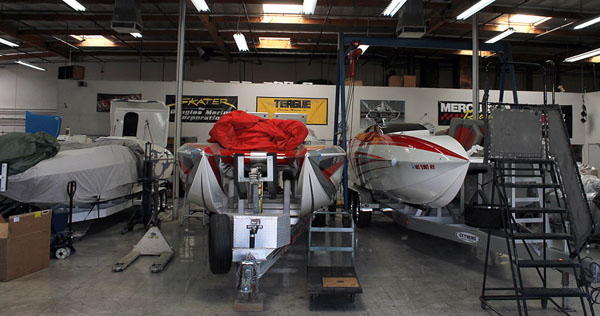 A Magic deck boat, a Spectre sport cat and a 29-foot E-Ticket were front and center in the service bays at Teague Custom Marine.

This time was no different. Whether it was a classic Schiada V-drive, a Magic deck boat, a 28-foot sportboat from Howard Custom Boats, a jaw-dropping 40-foot Skater Powerboats catamaran (aka the Teague family runabout) or offshore V-bottoms from the likes of Cigarette Racing Team and Fountain Powerboats, there was plenty of hardware to examine.

John Teague, one of the company’s lead riggers and the son of TCM founder Bob, said there were currently around 40 engines sitting in the shop in various stages being constructed, rebuilt or refreshed. Two of the engines were the 1,200-hp bad boys that power Michael “Doc” Janssen’s 52-foot Outerlimits Offshore Powerboats V-bottom Without Limits.

The Howard 28 Bullet project stood out primarily because the boat was sent to Teague for some upgrades from a customer in Pennsylvania. Wildcat, a non-Teague-powered Skater 368 cat that has spent its life in the Midwest and on the East Coast, also was cool to see even if it was only at the shop for a sales evaluation and general service before its new owner in Northern California picks it up. 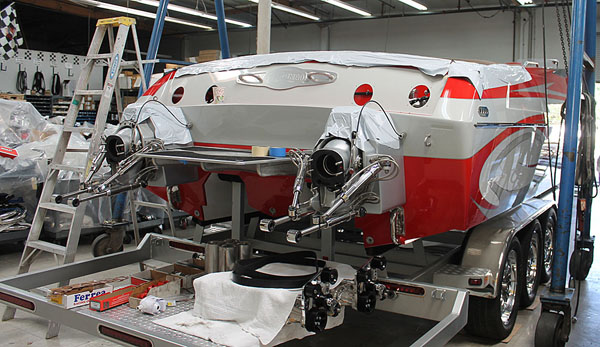 George Ogden’s E-Ticket 29 Luxury Cat is in the shop this week getting some service and repair work done before next month’s Desert Storm Poker Run.

The service work — like the 32-foot Spectre Powerboats cat with Ilmor Marine engines in for “deep service” — always catches my eye, but there’s much more to TCM, including engine manufacturing, parts development and supply, and a heap of advice from its dedicated staff.

Upon asking John Teague how the engine side of the business was going, he said it was great, adding that the company is seeing more of a demand for TCM engines as of late. In fact, there was a TCM 1100EFI being built for a 28-foot Shockwave Custom Boats V-bottom and a new 1,250-hp engine in progress for a hot new boat that we’ll hear more about soon enough.

With a busy season already in the works and his second baby girl on the way, John politely answered my questions and went back to the grind—literally the grinder—and started working to complete the next project in the best way he knows possible, the Teague Custom Marine way.