You are at:Home»Community»Dream Summer Ahead 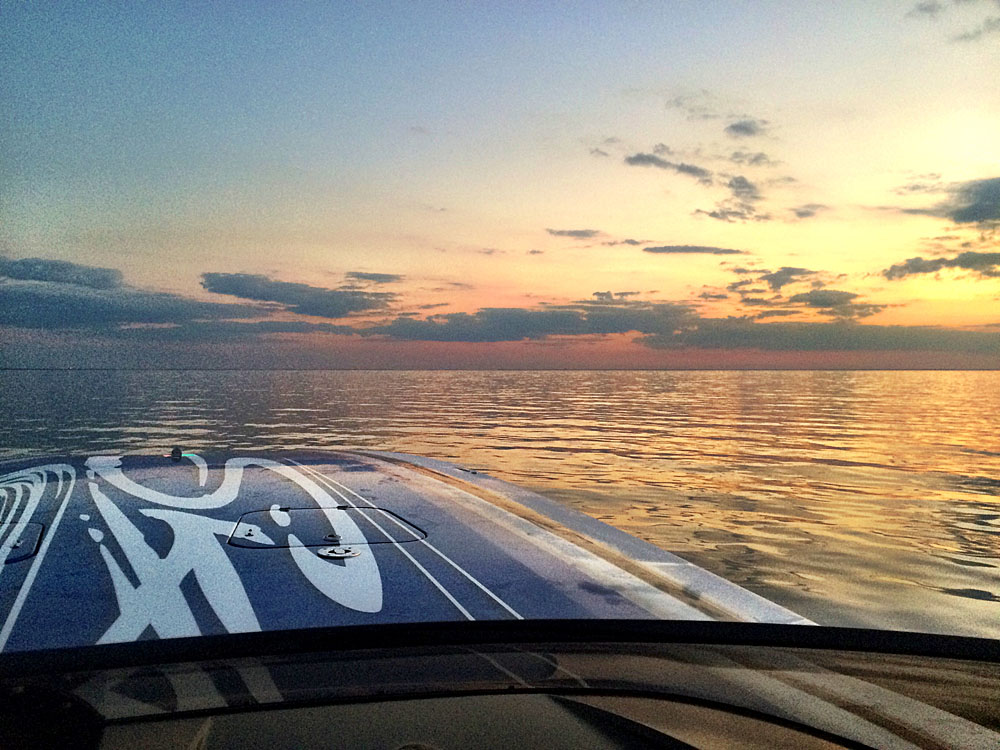 Kort and Jessicca Wittich enjoyed one of the nicest weekends in the history of the 28th annual Tickfaw 200 Poker Run in their 38-foot Skater Powerboats catamaran. (Courtesy of Jessicca Wittich.)

It’s Thursday afternoon, less than a week after the high-spirited Tickfaw 200 Poker Run in Louisiana has come to an end, and Kort Wittich, who lives in Covington, La., is finally starting to recover. Not only was the 28th annual poker run his first in the 2014 388 Skater Powerboats catamaran he recently purchased with twin 1,150-hp Sterling Performance engines, Wittich also participated in the Desert Storm Poker Run in Lake Havasu City, Ariz., the week before in his Sunsation Boats 34 CCX with triple Mercury Verado 300 engines.

Sounds like a dream, right? A couple of awesome boats to choose from on back-to-back weekends at two “bucket list” poker runs for most performance boaters. For Wittich and his lovely wife, Jessicca, it kind of was.

Wittich and the crew in the Back 2 Kort 388 Skater spent much of the poker run with Bill Pyburn and the crew in Pyburn’s new Pure Platinum 388. (Courtesy of Yvonne Aleman.)

First of all, Wittich had never been to Lake Havasu, which is an experience in of itself thanks to the desert scenery and refreshing Colorado River water. But when you put your 34-foot center console on display in the massive Desert Storm Poker Run Street Party and then spend a couple of days playing around on the lake with hundreds of other boaters, you’re bound to have an amazing time—which is exactly what happened.

While they were in Havasu, their home state of Louisiana was getting dumped on and the rain deluge continued throughout the week. Yet when it came time to put the Skater in the water for the Tickfaw 200, the couple was blessed with outstanding weather.

“I’ve been running the Tickfaw for many years, I think this was number 12 or 13, and this year was by far the best weather we’ve ever had,” said the 38-year-old Wittich, who owns Kort’s Construction Service in Covington and credits his grandfather for introducing him to go-fast boats at the Lake Pontchartrain races when Al Copeland—a Louisiana icon—was racing offshore boats. “We had such a great time and got to hang out with so many cool people. We ran the boat Thursday, Friday, Saturday and Sunday. I think we burned close to 400 gallons of fuel.” 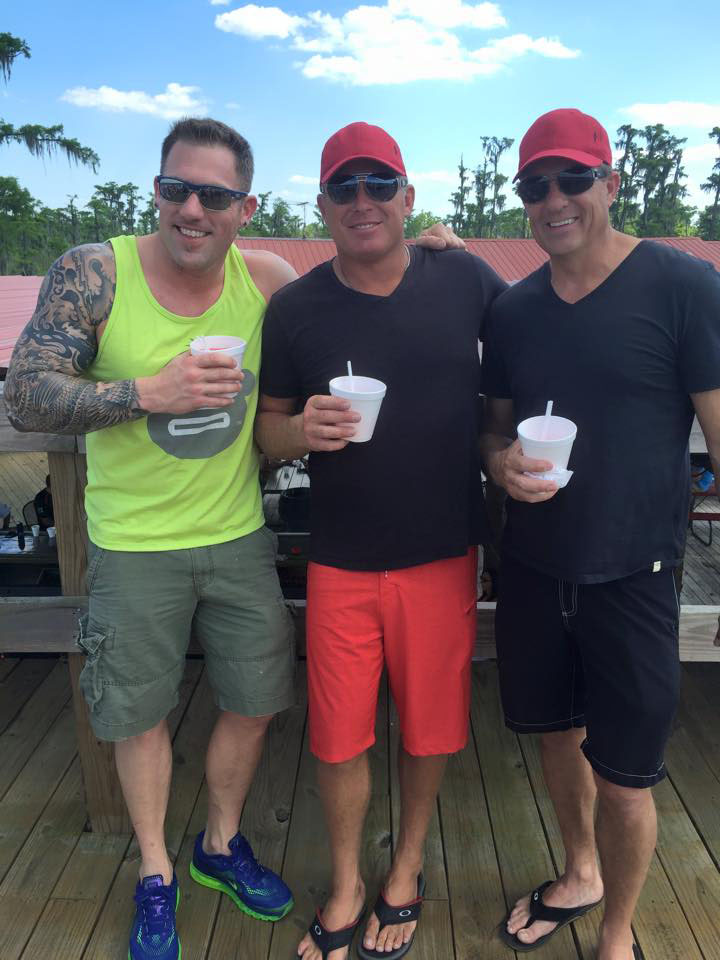 This trio of Skater 388 owners—Kort Wittich, Bill Pyburn and Mike Thornton—had a memorable time in Louisiana. (Courtesy of Fallon Thibodeaux.)

Running a lot with Bill Pyburn, who brought his new 388 Skater Pure Platinum to the event, Wittich said it was nice to get some extended seat time in the boat since he’d only run it a half-dozen times in short intervals before Tickfaw.

“The Skater is awesome—the ride is so much different than a V-bottom, especially in a poker run,” said Wittich, who thanked Stephen Emmons and the team at Total Marine Performance in Ponchatoula, La., for caring for his boats. “You know that point where everyone takes off and the water is all mixed up? In a V-bottom that is usually tough to get through or to keep everyone comfortable. In the Skater, we just went to the outside and went with it. We weren’t even running that hard and the boat just ate it all up. It’s such a comfortable ride.”

Wittich was especially grateful for the time Pyburn spent with him in and out of the boat. 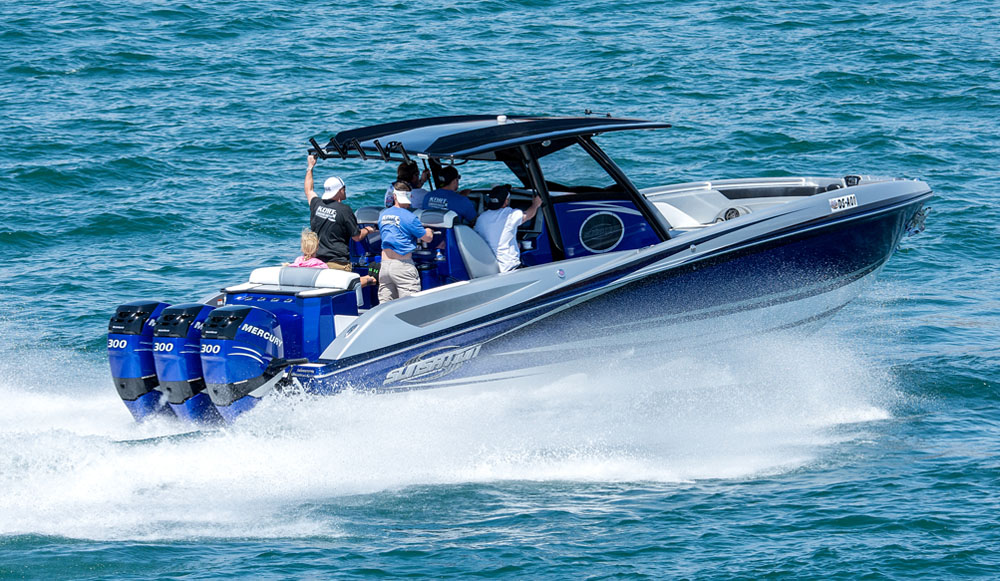 Wittich was glad he took his Sunsation 34 CCX Kort Ordered to Lake Havasu for the Desert Storm Poker Run. (Courtesy of Erick Bryner/FireDrillProductions.com.)

“Bill and Mike Thornton [owner of the Frisky Business 388 Skater]went out with me on Thursday and gave me some pointers,” Wittich said. “Bill spent a big portion of the day in the boat showing me things and giving me advice on the attitude of the 388s since he’s owned a few of them. I really can’t thank him enough—it’s going to be fun to run with him again in Jacksonville.”

Wittich said they are taking the Sunsation to the Smokin’ the Sound Poker Run in Biloxi, Miss., at the end of May and then heading to Florida with the Skater the following weekend for the Jacksonville River Rally Poker Run.

And if all goes as planned, the rest of the summer will be just as dreamy.