You are at:Home»Awesome»Express Cruiser Bling 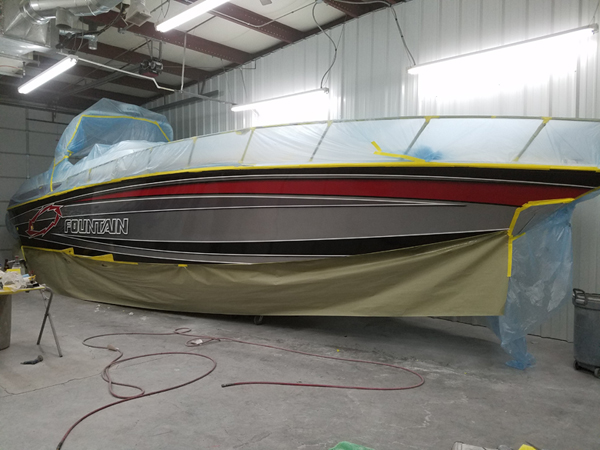 Chad Engel had to tackle the metal-flake gelcoat application on his father’s Fountain 38’ Express Cruiser one hull side at a time.

If you happen to be cruising on the Lake of the Ozarks this season and spy something tall and sparkly on the horizon, chances are good it will be a 2009 Fountain 38’ Express Cruiser powered by MerCruiser 496 HO engines and owned by Bob and Pat Engel of Omaha, Neb. The Engels have a lakeside condominium, and during the summer they, as well as their son Chad and his wife, Kari — who own a 2007 Fountain 42 Lightning — log a lot of time on the Central Missouri waterway.

That sparkle, especially when the sun hits the 38-footer in just the right way, will come courtesy of metal flake gelcoat — that’s right, metal flake gelcoat on an eight-year-old express cruiser — applied by Chad Engel and an employee at Custom Image Auto Body, his business in Omaha. At the end of last season, Engel and his father decided that the Fountain, having started its life on the water in Florida before the senor Engel purchased it in 2014, could use some sprucing up.

“The top of the boat was oxidized really badly,” said Chad. “I tried to polish it out, wet-sanded it, buffed it out, but nothing seemed to get it back to where it should be. The hull sides were actually fine. We were just planning on doing the top, and the boat has a completely black bottom. But we also decided to do the hull sides.

“I do a lot of warranty work for Bass Prop Shops, so I do a lot of metal flake repair on bass boats,” he continued, then laughed. “I said to my dad, ‘Let’s do it in metal flake’ and at first he was like, ‘Uh, no.’ But we decided to try it. There is so much talent out there with all the painters these days that it’s hard to do something that stands out. 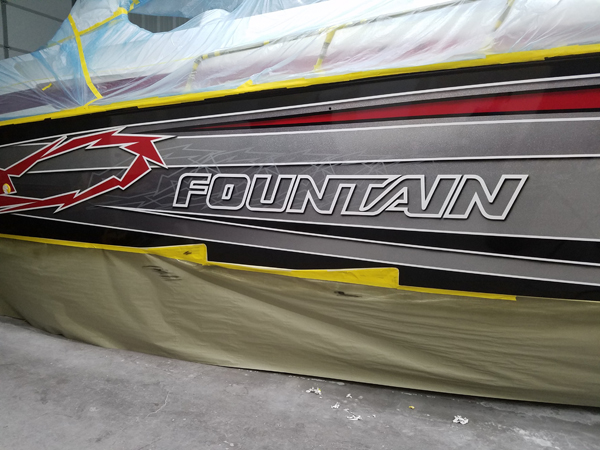 Said Chad Engel: “Metal flake gelcoat is a little tougher to work with than paint.”

Bob Engel also chuckled when he recalled his son’s suggestion.

“The first thing I said was no,” he said. “But the idea kind of grew on me. I thought, what the heck? He came up with a design so I could see what it was going to look like. We decided to leave the hull black — I don’t know that Fountain made very many like that — but do the hull sides in metal flake.”

Chad Engel has been painting powerboats since the early 2000s. Among his best-known projects was the “Green Monster,” a 35-foot Baja Outlaw that graced the cover of Powerboat magazine. But the challenges inherent in applying metal flake gelcoat over substantial surface area made the job particularly difficult. The project started three months ago.

“We ended up sanding the whole boat,” he said. “Then we started with metal flake gelcoat. First we did light silver, then darker silver to create a fade, then two different reds. It’s such a big job that we’ve had to do one side of the boat at a time.

“Metal flake gelcoat is a little tougher to work with than paint,” he continued. “It builds differently. It’s thicker. The metal flake actually comes in a bag, like powder. Then you mix it with clear gelcoat. It makes a humongous mess — it looks like we had a glitter explosion in our paint room.”

“Gelcoat is really hard to sand compared to paint,” he said. “It’s like sanding concrete. We’ve been working on it for three months. We did the port side first. Now we are working on the starboard side. We’re painting on the stripes now. We have about three more weeks to go.”

The Engels are hoping the 38-footer, which recently was outfitted with a bow thruster and is having its Bravo Three drives rebuilt, will be completed in time for the upcoming Spring Harbor Hop event on the lake. Regardless of when it gets on the water, the boat is certain to capture attention.

“I don’t think there will be an express cruiser down there that will look like it,” Bob Engel said, then laughed again. “We’re anxious to get it all done. I think it’s going to be freaking awesome.”