You are at:Home»Community»Member Spotlight: Dan Ellis 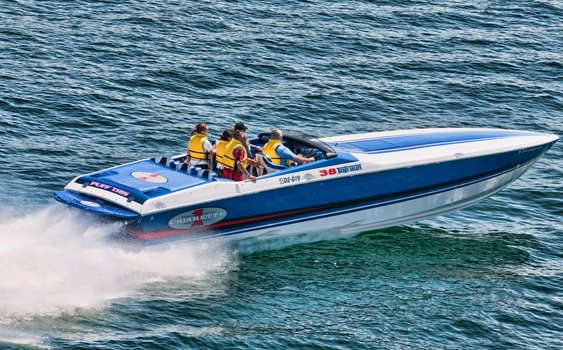 In his 2008 Cigarette’s 38’ Top Gun, Dan Ellis found exactly the kind of strong and spacious go-fast boat he was looking for. (Photo courtesy/copyright Jay Nichols/Naples Image.)

Would you take your high-performance powerboat more than 2,000 miles across the country for an upscale, weekend-long party? For Dan Ellis and his wife, Lisa, who own a 2008 Cigarette 38’ Top Gun, the answer is a definitive yes. So next week, Ellis will have his 38-footer towed from Southern California to the Cigarette Racing Team Rendezvous in Destin, Fla., where Dan and Lisa Ellis—along with 39 other lucky Cigarette owners and their guests—will spend the weekend boating and playing on and off the Emerald Coast.

For Ellis, who got his go-fast boating start on the local lakes of Southern California in a 21-foot Commander jetboat, it will be his fourth Florida boating adventure since he bought the 38-footer with twin Mercury Racing 525 EFI engines from Lip-Ship Performance in Miami less than a year ago. He and his wife have taken the Cigarette to Key West twice, and “hung around” in the Miami area once. The 38’ Top Gun is Ellis’ second Cigarette—his first was a 35-foot Playboy model. 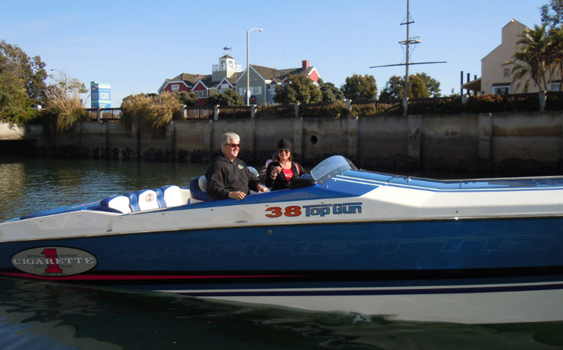 Dan and Lisa Ellis in their Cigarette 38’ Top Gun.

“I was so unhappy with the Commander—it was such a piece of junk that I never wanted to get stuck with an unsafe boat again,” says Ellis. “They used wood screws to hold in the fuel tank. One of the screws came loose and punctured the fuel tank, so I ended up with 20 gallons of fuel in the bilge. I wanted to find something well built. I know that any boat can break, but I wanted something that was strong and that could hold up to the rough water of Ventura. It gets pretty rough here. So that’s how I found my first Cigarette.”

Construction quality plus cockpit space attracted Ellis to his second pre-owned boat from the iconic, Opa-Locka, Fla.-based builder. “I’m 6’4” and I needed something I could be comfortable in,” Ellis says. “I looked at some nice Fountains, but there was just no room. The Cigarette was perfect.”

At present, Ellis’ 38’ Top Gun is being outfitted with new IMCO SCX drives at So Cal Speed and Marine in Castaic, Calif. After the rendezvous next weekend, the 38’ Top Gun will be trucked to the TNT Marine Service Center Marina in Miami. Ellis and his wife are planning to return to the area for the Key West Poker Run in November, the 2013 Miami International Boat in February, and maybe even the poker run that happens the weekend after the show. 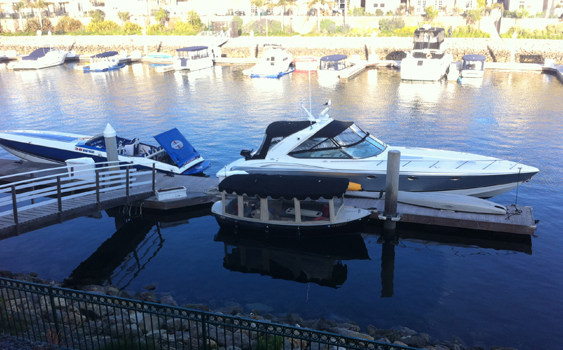 “I call Phil [Lipschutz of Lip-Ship Performance], say ‘Hey, we’re coming down,’ and when we get there the boat is ready to go. It’s like having your own personal pit crew. Their service is unbelievable.

“A lot of the attraction of going boating other places is meeting people from around the country,” Ellis continues. “In my last Cigarette, I went to Grand Lake in Oklahoma twice—that’s where it was from. I took it to Florida, San Diego, Northern California. I sold it to a guy in Boston, and we took it around the lighthouses in Boston.”