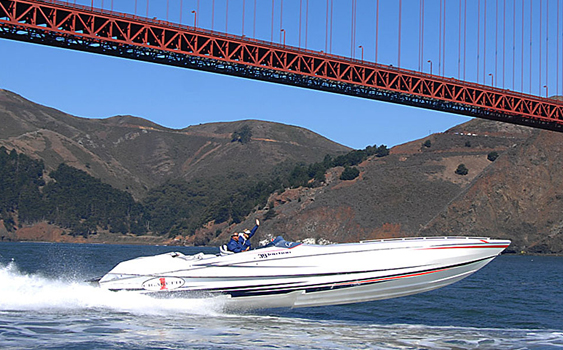 Whether they’re running to Stockton to watch a baseball game or cruising with friends in the San Francisco Bay (pictured), Milt and Jan Baehr love operating their Cigarette Racing 39 Top Gun Unlimited. (This photo and below by Wayne Riggert.)

I’ve been to a lot of poker runs over the past decade and have met many husband-and-wife boat owners who love doing poker runs together, but I had yet to meet a wife who actually enjoys go-fast boating as much, or more, than her husband.

That was until last Saturday during the Big Cat Poker Run on the Sacramento River Delta in Northern California when I rode along with one fun-loving couple in their 2006 Cigarette Racing 39 Top Gun Unlimited with twin 850-horsepower supercharged engines from Mercury Racing.

During my ride with Milt and Jan Baehr, who were married in 2006 and own a stunning home in Discovery Bay where Jan has lived since 1977, I witnessed a true husband-and-wife team in action as we left the waterway-based community for Pittsburg then Stockton then back to Discovery Bay. With matching David Clark headsets, Milt and Jan communicated extensively as Jan navigated while Milt ran the boat consistently between 80 and 100 mph for most of the 100-plus-mile poker run. 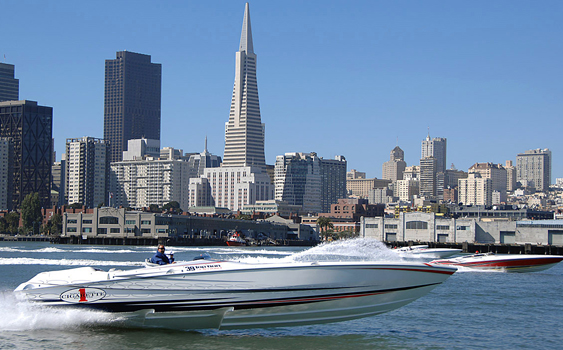 But best of all, Jan never once settled back into her bolster or took her eyes off the boat traffic in front, behind or on each side of the 39-foot Cigarette. I’d never seen a wife with as much intensity. It helps that Jan is a competitive person who raced jet boats as well as offshore boats in the late ’70s and early ’80s. Milt also raced competitively on the water—although his choice of craft was a sailboat—up until just a couple of years ago. So between the two of them, they don’t like being passed.

Milt still owns his 50-foot Jeanneau sailboat, Igoodia, but he said the boat, which is located in the British Virgin Islands (BVI), is for sale as he recently retired from racing. He and Jan have a few more rides—a 39-foot Doral cruiser, a 25-foot Sanpan pontoon boat and a trifecta of Sea-Doo watercraft—on the docks behind their house in case they’re not in the mood for going real fast. 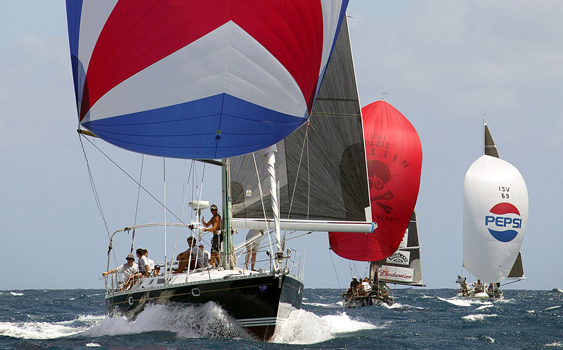 Milt Baehr spent a lot of time racing sailboats competitively in the Caribbean before retiring from the sport recently. (Photo by Tim Wright.)

Last weekend in Discover Bay, the Baehrs, who were joined by their good friends Gene and Pam Musselman, were excited to be running Painkiller, the 39-footer named after the national drink of the BVI, in the 13th annual Big Cat Poker Run. At one point early in the run, we passed Jan’s 34-year-old son Matt Saale, who completed the entire poker run on his speed ski behind his 35-foot V-bottom from Fountain Powerboats. 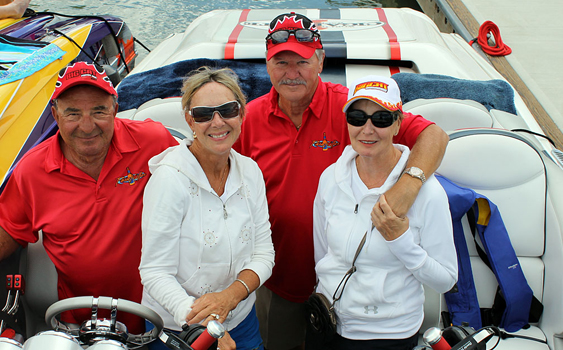 “My very first ride in a Cigarette was with Howard Arneson in Nauti Eve,” said Jan, who met Milt while skiing in Lake Tahoe in 2003. “It was the best ride in an offshore boat and it got me absolutely hooked on Cigarettes—I would have nothing else. Those cats are something else, but our boat can handle any water we come across.”

Milt agrees with Jan, which is why they opted to purchase the 39 Top Gun Unlimited from the Cigarette factory in 2006.

“We’d been riding with Karl Koster in his 42 Tiger and Carl Zanger, who owned a 38 Top Gun, and we loved those boats,” Milt said. “So when we decided to get an offshore boat of our own it had to be a Cigarette.”

Milt and Jan use the boat frequently and occasionally run it all the way to the San Francisco Bay and the Pacific Ocean. They’ve even taken it to Lake Tahoe, where Milt lived before moving full time to Discovery Bay.

It’s quite clear that Jan and Milt love boating together. And while I realize there are tons of couples with just as much passion for being on the water, I don’t know if I’ll ever come across another duo quite like the Baehrs.