You are at:Home»Community»The Jones Family Vacation 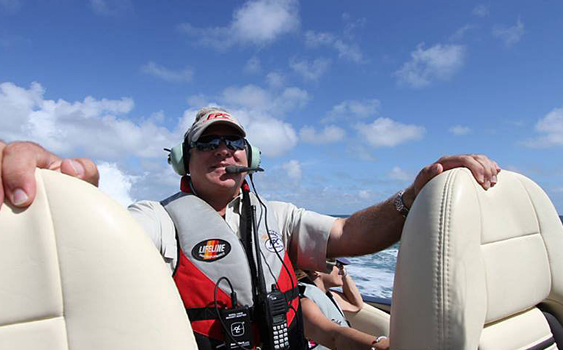 At one of his own events, Florida Powerboat Club founder Stu Jones enjoys a ride in a 477 SPX V-bottom from Nor-Tech Hi-Performance Boats. (Photo by Glen Philip Hagen/Speed & Pleasure)

Not every vacation that Florida Powerboat Club (FPC) founder Stu Jones takes with his family is centered around boating, but this year’s summer vacation definitely was. Jones loaded his family—wife, Jackie and sons, Tyler and Max—into his 2006 Astoria RV and headed north from their South Florida home for a two-stop poker run tour, following trips to two other non-FPC events, the Texas Outlaw Challenge in mid-June and the Smokin’ the Sound Poker Run in Biloxi, Miss., at the end of April.

The destination of the Jones’ summer excursion? Boyne City, Mich., for the 10th annual Boyne Thunder Poker Run followed by Buford, Ga., for the Pirates of Lanier Poker Run on Lake Lanier.

Sandwiched between FPC events to the Bahamas (June 28-30 and July 25-30), the nearly 4,000-mile round trip turned out to be a breath of fresh air for Jones and his family, who were left without the use of their generator when it stopped working just as they were getting ready to leave Michigan. 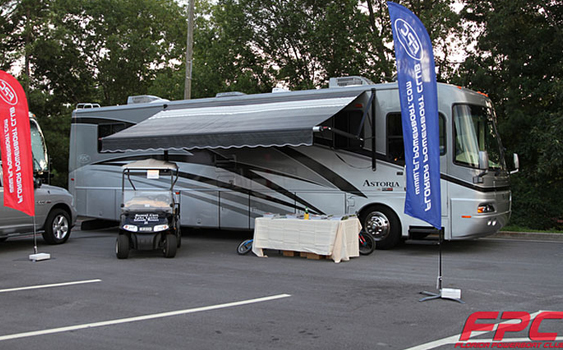 Along with checking off driving an RV through the Great Smoky Mountains from his bucket list—“I won’t ever do that again,” he said after navigating the steep, windy roads—the journey also left Jones with a deeper appreciation for his club members, and poker run teams in general.

“If nothing else, this whole trip reminded me just how passionate these guys are who haul their boats around to various poker runs,” Jones said. “It really hits home when you see guys from the South in Michigan for the event and guys from the Northeast and Midwest down in Georgia for the poker run.”

Besides getting to spend the time with his family—his main reason for taking the vacation—one of the other rewarding aspects of the trip was that he felt like he was at a club event at both poker runs. 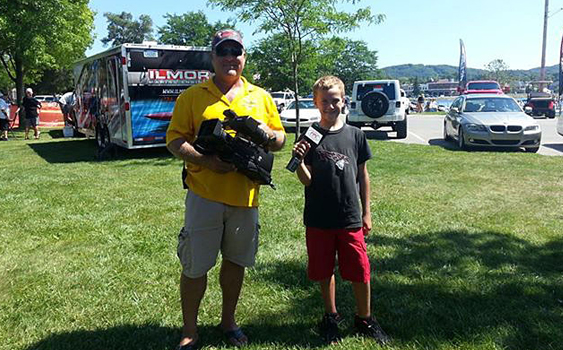 Stu Jones and his son, Tyler, get ready to cover the Boyne Thunder Poker Run in Boyne City, Michigan. (Photo by Jackie Jones.)

“Honestly we felt right at home at each event,” Jones said. “The powerboating family is a pretty tight-knit group and they’re a very mobile group. The mileage they’ll book just to get to a poker run and hang out with their friends is remarkable. We loved seeing and socializing with all of the people who we normally don’t get to spend much time with because we’re busy working.”

Jones said he is planning to produce one of the club’s upcoming “Powerboating in Paradise” television shows as the FPC Summer Poker Run Tour with four segments dedicated to the events he attended in Mississippi, Texas, Michigan and Georgia. In the coverage of the two July events you can expect to see scenes from the road trip as well as guest appearances from Tyler and Max. He’s also planning to produce a one-hour event video from the Boyne Thunder Poker Run.

Not only will the Boyne Thunder Poker Run be part of an upcoming “Powerboating in Paradise” TV show, Jones is producing an event video specifically from the run. (Photo courtesy Florida Powerboat Club.)

In the meantime, Jones has a lot on his plate, including this week’s run to the west end of the Bahamas. One of the club’s largest events—the Emerald Coast Poker Run (Aug. 14-17)—is just around the corner, and Jones has high expectations for the 21st annual event, which has raised more than a million dollars for the Emerald Coast Foundation over the years.

Featuring the Miss Boat Week bikini contest on Thursday, an afternoon fun run and evening beach party on Friday, and Saturday’s 10-stop poker run followed by The Big Bash presented by the Emerald Coast Foundation, the event is sure to be over the top as usual.

“Historically the event was always the third weekend of August so we moved it back to that weekend this year to extend the summer tourism season for the community,” Jones said. “The outcome of the poker run should be improved since the waterways will be less congested and the hotel availability and rates should be better. The only downfall is that many kids start school the following week so we have to literally finish the poker run and leave the next day to get the kids to school.”