You are at:Home»Community»The Right Course to a First Cat 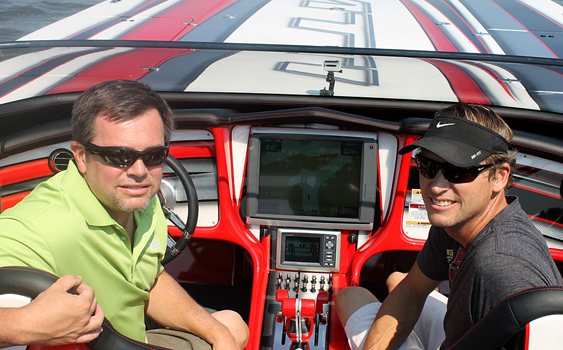 By any measure, a 44-foot Marine Technology, Inc., catamaran with dual Mercury Racing 1100 engines is a serious boat that needs to be approached with serious respect by any new owner, especially one stepping out of a V-bottom and into his first cat. With that kind of power, the 44-footer is more than a large, pretty object on the water—it’s one that accelerates quickly and is capable of speeds approaching 150 mph. Anyway you look at it, it’s a whole lot of go-fast boat to handle and a whole lot of responsibility.

Chicago-based businessman Vinnie Foglia is no stranger to the high-performance powerboat world. His last ride was a 42-foot Cigarette V-bottom with Mercury Racing 1350 engines and he owned several fast boats before he bought the Cigarette. But Foglia had never owned a cat, so even before he decided to buy his new 44 MTI, which was delivered to him at Missouri’s Lake of the Ozarks several days before last weekend’s Shootout, he knew he needed all the expert instruction he could get.

That’s why Scott Sjogren of Pier 57 Marine, the Waukegan, Ill., based MTI and Cigarette dealer that sold him the boat, delivered the boat to Foglia in person and ran it with him on the lake for two days before heading back to Chicago. Sjogren was only too happy to walk his friend and client through the basics.

For the average new-catamaran owner with substantial go-fast V-bottom driving experience, that might have been “enough.” But Foglia, a savvy guy with more than a little gray matter, is anything but average. So the day after Sjogren left, he took Tres Martin’s Performance Boat School driving course from its namesake. In the classroom and on the water, Foglia spent a full day absorbing information he knew he needed from one of the best—if not the best—professional powerboat driving instructors in the world. 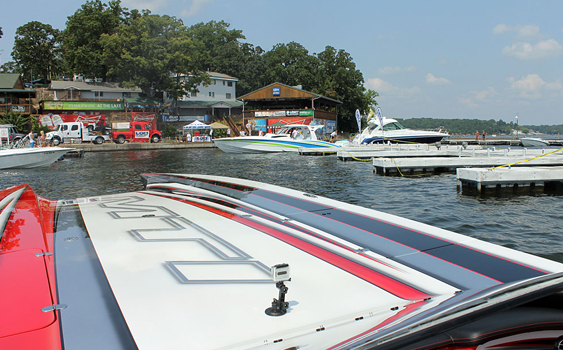 Looking down the deck of Foglia’s 44-footer, which logged its first running hours last week before the Lake of the Ozarks Shootout.

Still, Foglia wasn’t quite finished with driving instruction for his 44-footer. For the next couple of days, he was joined in the cockpit by Greg Webber of Pier 57.

An experienced catamaran and V-bottom driver who also has logged substantial time on the Lake of the Ozarks, Webber throttled the cat and Foglia drove it during the poker run on Friday before the Shootout. Webber guided Foglia through the morass of choppy, boat-and-debris-filled water from the morning to the early afternoon—running up to 120 mph a few times when conditions and traffic allowed, but mostly cruising between 75 and 90 mph.

Thanks to crushing late-August Missouri heat, they eventually bailed on the poker run, tied up the cat at the docks and headed to Dog Day’s Bar and Grill to escape. Done for the day and the week—Foglia was flying back to Chicago the following morning—the first-time catamaran owner reflected on the strengths of his new ride and the differences between driving a cat and a V-bottom.

“In conditions with predictable seas going in the same direction, the V-bottom was fine,” he said. “But the catamaran handles this kind of wash-bowl water much better.

“And the separation of those engines is such a nice thing when it comes to docking,” he add. “It’s much easier—it changes your whole docking strategy. I’m really enjoying the cat. I love it, and MTI did a beautiful job. But I still have a lot to learn.”

Without question, Foglia is on the right course.