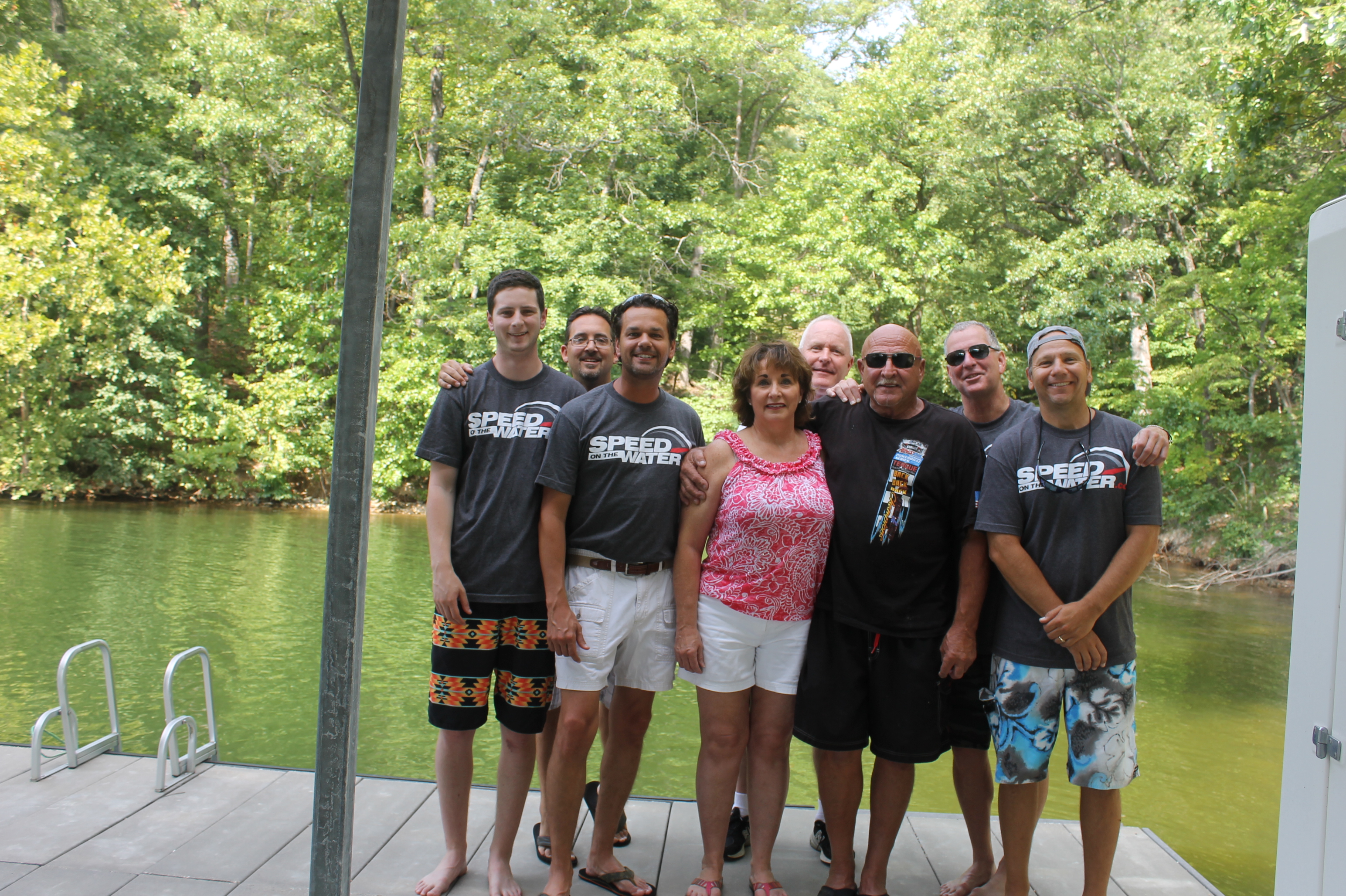 Last summer, Alex Trulio (far left) joined his father (back row with sunglasses) and the rest of the speedonthewater.com to cover the Lake of the Ozarks Shootout.

“But take your time, think a lot. Think of everything you’ve got. For you may still be here tomorrow, but your dreams may not.”—Cat Stevens, Father and Son

All apologies for what will surely be the most self-indulgent column of my career. But, you see, my son, Alex, graduates today from journalism school at the University of Oregon and I’m feeling nostalgic. Alex has marked some major milestones with me during my career covering the high-performance boating world, and three memories in particular have me reeling.

About a year after I started at Powerboat magazine in 1995, editor Eric Colby and I took Alex for his first boat ride off Ventura, Calif., in the magazine’s “project boat,” a 27-foot Formula. Alex was four years old, and I had him strapped tight to me in one of those kid-backpack things. In hindsight, it probably wasn’t the safest setup—it wasn’t the only time in the past 21 years I wouldn’t be nominated for a “Father of the Year” award—because if I got tossed overboard he’d go with me. But I can still remember him laughing and pulling my hair as we rode along. Eric took it easy, but for Alex it was his first thrill ride.

Five years later, I left Powerboat and went to work for boats.com. That summer, the folks at Yamaha asked me if I’d like to run their new 1800 Exciter, a performance-oriented 18-foot jetboat with twin engines, and tell them what I thought. Bob Gonsalves, Yamaha’s longtime media guy who I’d grown close to during the years, and I decided to take our sons along and teach them to drive—just for the sake of the story, of course.

Sitting on our laps that day, Alex Trulio and Casey Gonsalves “drove” a powerboat for the first time in their young lives on Lake Castaic in Southern California. The best part of the day for a couple of nine-year-olds? Using the 18-footer as a swim raft to dive from when the boat wasn’t running.

Last year, Jason Johnson, my co-publisher at speedonthewater.com, and I took Alex to the Lake of the Ozarks to help us cover the Shootout. Alex was fresh from a month-long journalism school internship in Austria covering the Vienna Dragons, a semi-professional European football team, so a weekend gig in Central Missouri at a go-fast boat event wasn’t exactly exotic for an almost 21-year-old who’d just spent the better part of a summer (he stayed a few weeks after his internship ended—my kid is no dummy) stumbling around Europe. Then again, it was a free weekend of parties and fun—and maybe a couple of interviews to handle—and plenty of good stuff to look at. And it was a lot better than hanging solo for a weekend at our home in Belmont, a sleepy suburb about 25 miles south of San Francisco.

Alex stuck with us at the Shootout Hall of Fame Induction Ceremony on Thursday night and the Performance Boat Center Party a couple of hours later. He met a slew of well-known folks from the powerboat world, including Mike Fiore and Dustin Whipple. Of course he got a good-natured hard time for being my son, especially from Fiore. Whipple was going to take him on Friday’s poker run but somehow “overslept.” Still, Alex managed to find a ride for the day and a party or two that night. My work world, at least the social part of it, looked pretty good to him.

The next day, Alex saw the other side of my professional life. What started as a fun, though groggy, morning for both of us turned as serious as it gets in one horrible moment when Fiore’s catamaran flipped during its first speed run. Alex had to watch me work under tough conditions—he knew Fiore and I were good friends—and hold it together and continue to report all day. It was an eye-opener for him, I think.

Three days later, I walked into my home in the early evening after a business meeting. Alex was sitting on the couch watching the San Francisco Giants game. I told him that Fiore had died—I’d heard the news from Whipple on the way home. He could see I had been crying, and was close to tears again. He looked me in the eyes and said, “Keep your head up, dad.” I nodded and we went to dinner. We had burritos at a dive we love.

These are the memories swirling though my head as Alex graduates college today.

Don’t worry, you’re not going to have to read another Trulio—he’s headed for the public relations and marketing side of things, not reporting or feature writing, and he’ll do well. He’s already ten times the writer I was at his age.

Maybe it’s because Alex grew up around the craft. Maybe there’s a genetic component to being a good storyteller. All I really know is that I love him.