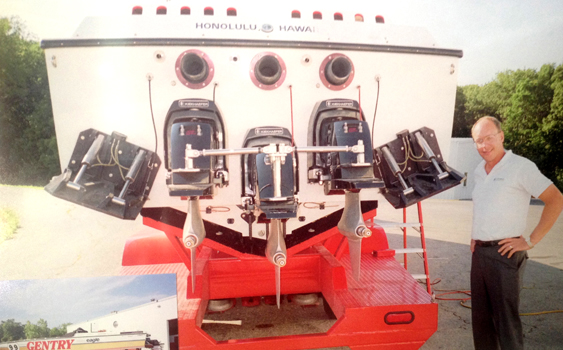 Go-fast boat engines pumping out 1,000 hp and more aren’t tough to find these days. All of the top engine builders including Chief, Crockett, Mercury Racing, Sterling Performance, Teague Custom Marine and more offer them. But 25 years ago, engines making that kind of power weren’t so common. And stern drives that could handle that much output? Those were rarer still.

That’s what the made the “Stern Drive by Kiekhaefer” so impressive when it was introduced in 1988. At the Key West Offshore World Championships that year, Bill Sirois, Gus Anastasi and actor Don Johnson piloted a Scarab V-bottom with triple turbocharged Gentry engines rated between 900 and 1,000 hp to a world title. Putting the power to the water were three Kiekhaefer Drives from a company then called Kiekhaefer Aeromarine and owned by Fred Kiekhaefer, the son of marine industry icon Carl Kiekhaefer, who died five years earlier.

“They won the Worlds in Key West with three second-place finishes,” recalls Kiekhaefer, the former president of Mercury Racing who still works as a consultant for the company and has started his own marine products design firm called K-Lab Design Works. “They weren’t the fastest boats out there, but they were the only ones that could finish all three races.” 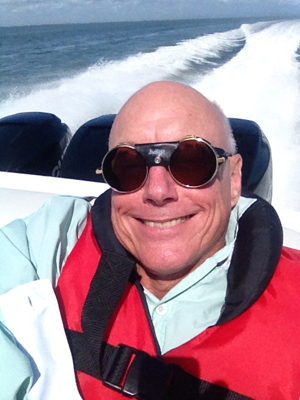 Kiekhaefer: “They are evolutionary descendants of the Kiekhaefer drives. Their DNA is apparent.”

Before the senior Kiekhaefer passed away in 1983, development of “beefier drive parts” was something of a reaction to the consistent failures of the MerCruiser No. 3 stern drive in high-horsepower offshore racing applications. Kiekhaefer Aeromarine began developing stronger aftermarket replacement parts for the No. 3 unit so its “Champion Maker” 600 hp racing engines could win.

“It became clear that the Mercury product of the day was not keeping up with the engine output of the day,” says Kiekhaefer. “So my father’s company started by making stronger shafts, gear cases and other parts for it.”

That well-identified need eventually evolved into what was called the “Transom Group” — a line of stronger replacement parts for the MerCruiser No. 3 stern drive. Essentially a complete drive sold in three separate pieces, the Transom Group included a complete upper unit, a complete lower unit and a beefier transom assembly. The Transom Group was among the early projects Fred Kiekhaefer initiated after he purchased Kiekhaefer Aeromarine when his father died.

“It made more sense to build a Kiekhaefer Drive as a whole integrated system, but we didn’t have the money for that,” says Kiekhaefer. “A customer of ours from Europe agreed to provide funding for development of the ‘Stern Drive by Kiekhaefer’ in exchange for being our first European dealer, so we decided to do it. We spent a bunch of money, but he never made his first progress payment. A very nice banker—OK, he was motivated to make some money—agreed to fund the rest of it and we were able finish the project.

“We introduced our new drive in February of 1988. With the Superboat title, Bill Sirois and Don Johnson put an exclamation point at the end of our first year. Kiekhaefer Drives won a second Key World Championship the next year, by the way, on the McManus-built Little Caesars Pizza boat,” he adds.

In 1990, Mercury acquired Kiekhaefer Aeromarine and hired Fred Kiekhaefer to head its Hi-Performance Products unit, which eventually became Mercury Racing in Fond du Lac, Wis. Of course, the Kiekhaefer Drive went with him, It was rebadged as the No. 6 drive and, several years later, evolved into the No. 6 dry sump drive.

“Mercury had a lot of technical capability when it came to gathering and analyzing data. We were able to do studies that quantified parasitic losses in the No. 6 drive’s powertrain,” says Kiekhaefer. “We saw that we had an opportunity to deliver additional power to the prop through dry-sumping, so we did it.”

With the exception of a few that may be in storage on or off vintage boats somewhere, the Kiekhaefer Drive is long gone. It has been replaced by the No. 6 dry sump and M8 units, which are more advanced than their K-Drive predecessor—spawned by a stern drive that was struggling to handle ever-increasing horsepower.

“The Kiekhaefer Drive is certainly not the same drive as a No. 6 or an M8—it doesn’t share any of the original parts with either of those drives,” says Kiekhaefer. “But they are evolutionary descendants of the Kiekhaefer drives. Their DNA is apparent. That’s fair to say.”