You are at:Home»Heroes»Real Heroes Getting Recognition 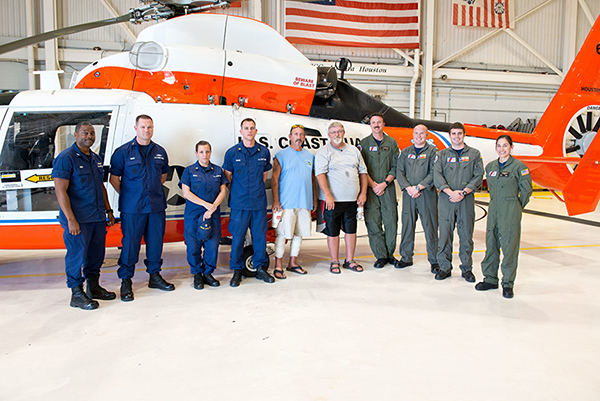 A collaborative effort between the Air Station Houston CGNR 6581 crew and Sector Houston-Galveston headquarters translated to a life-saving effort for two anglers (center) on Galveston Bay.

An uneasy mix of gratitude and dread grabs me every time I see one of those orange United States Coast Guard helicopters high above my home, on its way to the Pacific Ocean waters off Northern California. The water is cold year-round here, and while the biggest seas save themselves for winter—the famed Maverick’s big-wave surf spot is less than 30 minutes from my doorstep—they can rise without warning. In the afternoons here, onshore winds tend to howl.

These waters are dangerous for all mariners, as well as the good men and women of the U.S. Coast Guard who have the job of trying to save lives when things go bad. For commercial and recreational vessel operators and their crews, the Coast Guard can be the final line of defense in an emergency, the last—and far and away best—hope.

Respect does not even begin to describe my feelings for these committed life savers. They don’t make much money. Their lives are not easy. And all too often, they’re taken for granted.

So when a press release from the Coast Guard Foundation landed in my email in-box earlier this week, it caught my attention. The non-profit organization is “committed to the education and welfare of all Coast Guard members and their families,” according to the release.

Yesterday in Houston, the Coast Guard Foundation held its annual tribute to the United States Coast Guard. In particular, the organization honored the Houston-based Coast Guard Air Station aircrew CGNR 6581. And that’s where the story gets good.

Two days after an April 25, 2016 aerial search in which an overturned and partially submerged boat was located by the Air Station Houston aircrew, CGNR 6581 team members LT Gross, LT Scritchfield, AMT2 Moore, and AST2 Weaver took to the air again in their MH-65D helicopter to search for two fishermen reportedly on board the vessel. Though neither was found during initial search, the “warm water in Galveston Bay provided optimism for the collective rescue effort,” according to the press release.

They departed armed with information—collected by Sector Houston-Galveston “watch-standers”—that enabled the members of aircrew CGNR 6581 to refine their search. Sector Houston-Galveston had contacted two cellular companies to acquire GPS information from the fisherman’s phones and used the data to develop a specific timeline and location where the vessel may have capsized. With this new information, the watch-standers adjusted their next search pattern based on the notion that the fishermen could be clinging to nearby oil rigs.

Despite the diminishing probability of survival for the anglers, the crew of CGNR 6581 stuck with their search. Low on fuel during the final leg of the assigned search pattern, they spotted the first survivor clinging to a small oil wellhead protruding from the water.

On the final approach hovering near the first survivor, they spotted the second survivor about 500 yards away hanging onto another oil wellhead protruding from the bay. Now in a fuel-critical state after more than two hours of searching, they evaluated the risk and deployed a rescue swimmer.

Short on time and even shorter on fuel, the CGNR 6581 crew retrieved the two fishermen and returned to Sector Houston-Galveston headquarters, where the rescued fishermen received medical attention.

Sure, it’s the kind of stuff that happens all the time with the U.S. Coast Guard. But that doesn’t make it any less heroic or special, especially for the two lucky men in Galveston Bay whose lives were saved that day.

“We are very proud to be able to recognize the bravery of this aircrew from Air Station Houston,” said Susan Ludwig, president, Coast Guard Foundation. “The men and women of the Coast Guard volunteer to put themselves in harm’s way to protect the lives of those that go to sea. Selflessness is a virtue many may possess, but is a hallmark of these professional individuals and we are humbled to honor them.”

As I am with this column. So to all the men and women of the U.S. Coast Guard, thank you. None of us ever wants to need you, but we know you’ll be there if we do.