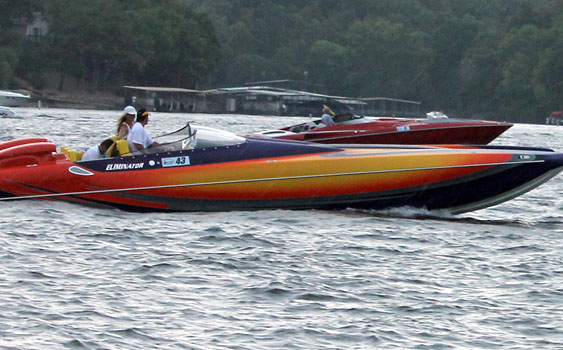 Greg Olson posted a 192-mph during the Lake of the Ozarks Shootout.

I have a love-hate relationship with Labor Day weekends. I love having three days off, especially when it’s warm. But I hate that this weekend signals then end of the high-performance boating season, at least in most parts of the country.

In any given go-fast boat season, there is the good, the bad and the ugly, although the latter are often one in the same. With an event happening every weekend, plus what goes down mid-week, plus all the industry stuff—new model-releases and such—it’s impossible to be everywhere at once or even hear about all of it. So don’t be offended if your particular high or low got left off my very short list. I’m sure it was really good or really bad. I trust your judgment. I just missed it.

With that in mind, I offer my highly subjective top-three highs and top-two lows (“top-two lows,” feels strange to write that).

Olson Claims 2012 Shootout Top Gun Trophy: After My Way, the well-known turbine-powered 50-foot Mystic catamaran wrecked and put itself out of the running before the annual Lake of the Ozarks Shootout, there was plenty of gloom and doom talk about how exciting the event would not be. Proving that one boat does not a thrilling event make, Greg Olson posted a blistering 192-mph run in a 33-foot Eliminator cat—and struck a blow for piston power, courtesy of GT Performance, in the process.

Mike Fiore piloted this Outerlimits SV29 to 99 mph during the Lake of the Ozarks Shootout.

Outerlimits SV29 Runs 98 mph on Mercury Racing 565 Power: Here’s another one I like for a number of reasons, not the least of which is that it flies in the face of all the haters and naysayers who pronounced the new SV29 dead in the marketing water after one of the 29-footers rolled during testing in late spring. The SV29 is alive and well, very well in fact. The same 29-footer that ran 98 mph before the Shootout reached 99 mph during it. Plus, the first Super V Light version of the boat debuted at the Shootout’s Street Party a few days earlier. (Read the story, Exclusive: Outerlimits and Janssen Unveil Super V Light at Lake of the Ozarks Shootout) 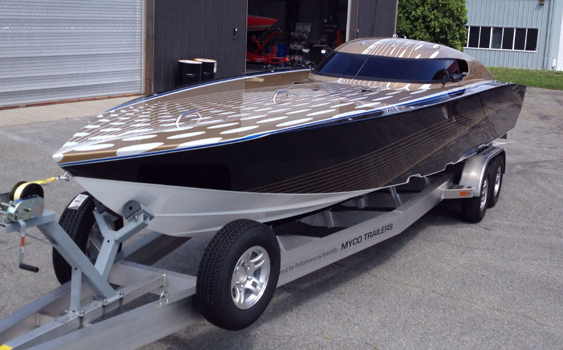 Will the new Outerlimits reignite the Super V Light class? Don’t mean to be a buzz kill, but, well, no. Only the economy can do that. 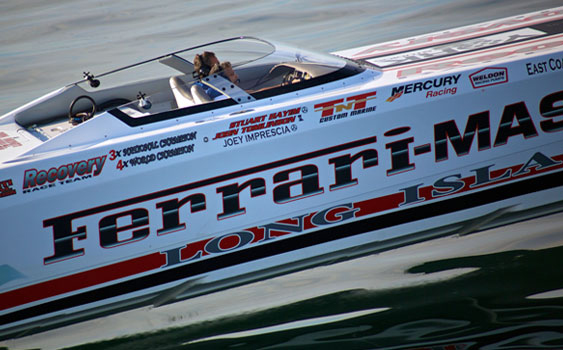 Hayim and Tomlinson Shatter Around Long Island Record: Stuart Hayim wasn’t convinced that Joe Cibellis and Joe Sgro broke his Around Long Island Record last year. Still, the new National Power Boat Association record stood. So Hayim put his money where his mouth was. He bought a new 42-foot Marine Technology, Inc., catamaran, had TNT Custom Marine rig it with Mercury Racing 1350 engines, hired John Tomlinson to throttle it while he drove and set a record of his own. Not bad for a 65-year-old cancer survivor.

Miss GEICO Burns Down in Sarasota, Crew OK: Year after year, Miss GEICO ran most of its “races” without competition. That’s a fact. But the turbine-powered 50-foot Mystic never failed to put on a good show for the fans that did show up. That’s another fact. When Miss GEICO burned during a test session Sarasota, Fla., offshore racing didn’t just lose its most visible and best-known boat. In all likelihood, it lost the pending reality of a real turbine class. The GEICO team hasn’t made any official decisions, but chances are good they’ll stay with piston power for the 2013 season. And that means there’s a good chance the Qatar team, which planned to go with turbine power to compete against Miss GEICO, will change its plans and go piston. The upside is the offshore world will get a new raceboat, and a top catamaran class will grow by two race boats, GEICO and Qatar. Still, it would have been nice to see, after all these years of waiting, real turbine-class racing. 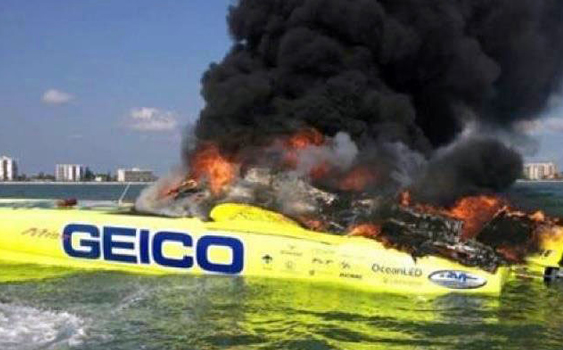 My Way Crew Confirmed to be OK After Crash: A point of clarification: that the My Way crew survived a terrifying 160-mph wreck during the 1,000 Islands Poker Run is not a “low.” Far, far from it. But the crash itself, was a serious low, and not just because it knocked the turbine-powered 50-foot Mystic out of the Lake of the Ozarks Shootout. It was a low because less than a month earlier the same boat spun out at 190 mph during another poker run. Accidents happen. People make mistakes. Nobody’s perfect. Pick your cliché/excuse. But from noise to fuel consumption, the high-performance powerboating world has enough public perception problems. That the same high-profile go-fast boat was involved in two potentially deadly crashes on uncontrolled public waterways—on weekends—is a big low for all of us. 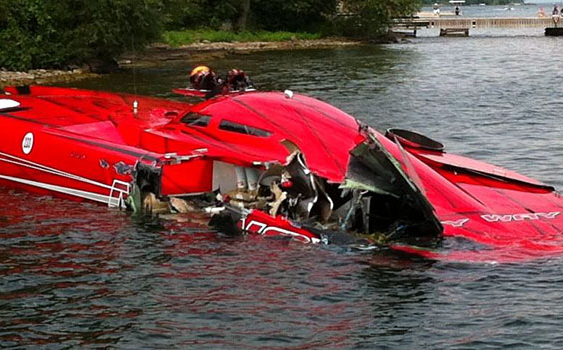 My Way had accidents at two poker runs.