You are at:Home»High/Low»Stories of the Year, Part I 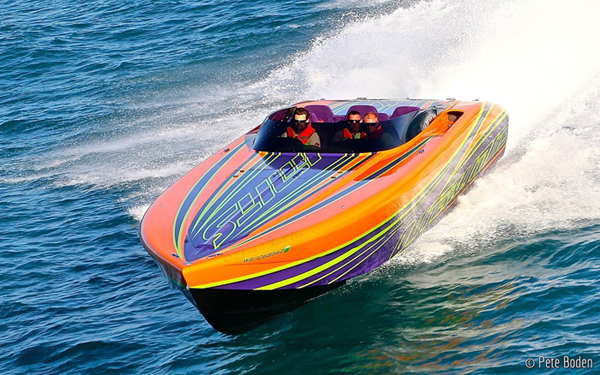 With new beauties such as this SV 43 owned by Vinnie Diorio, Outerlimits proved it is alive and well. Photo by Pete Boden/Shoot 2 Thrill Pix.

This year, I wrote almost 1,000 stories. Any way you look at it, that’s a crazy number for one guy. But when you add up the daily articles I wrote for speedonthewater.com and features for its associated digital magazine, a weekly column for this site and bi-monthly columns for boats.com, that’s what you get. And here’s the funny thing — it really didn’t feel like that much work. That’s how it goes when you’re lucky enough to love your job.

But enjoying what you do as a writer and enjoying what you have to write about can be two very different things, and never was that difference more apparent than in 2016. Between my colleague Jason Johnson and I, we covered more tragedy this year — by a large measure — than any year prior. Reporting death is an awful part of this job. No matter how well you’re able to disconnect and distance yourself, you never get used to it.

On the flip side, I had the privilege and joy of reporting far more good news than bad. Yes, some of that comes from my desire to seek out good news. I’ve never hidden that. As a reporter, I look for the positive. It isn’t always there, but I’ll never stop looking for it. If that’s a professional flaw, so be it.

What follows are my picks for this year’s top stories.

Seven years ago, I wrote about Nor-Tech’s then-new 39-foot performance center console — it was my first “center console story” for speedonthewater.com. To celebrate building hull No. 100 of its popular 39-footer this year, Nor-Tech teamed with its dealer Double-R Performance in Canada to build a 100-mph model for the 2016 Miami International Boat Show, where the company also debuted a 45-footer.

In June, Sunsation announced it was suspending all sportboat sales and production to meet demand for its popular CCX center console line. Last week, I wrote about the delivery of Mystic Powerboats M4200 luxury center console No. 19 to a client in Jupiter, Fla., and close to 30 M4200s have been sold since the company introduced them a little more than two years ago. No doubt about it, center consoles ruled in 2016.

With the death of 33-year-old outboard applications manager Chris “Chappy” Chapman in March, Mercury Marine lost one of its brightest talents. Well-known for his work with Wellcraft, particularly on the Scarab line of high-performance sportboats, Donny Wadeck died just one week after his 60th birthday in October.

And earlier this month, 53-year-old Tom Healey — a nationally recognized powerboat concierge and vice president of Marine Unlimited — died at his home in Beverly, N.J. (Note: Jason Johnson will cover the performance-boating community losses in his column on Wednesday.)

In its first full year under new ownership, Outerlimits Offshore Powerboats showed no signs of slowing down. In addition to new SV 43 and SL 41 models, the company built an SV 50, an SL 44-based center console that went to a customer in the Middle East, a Superboat Extreme-class SV 43 raceboat and has an outboard-powered SL 41 nearing completion. In November, the company finally recovered its tooling for its SV 29 and already is building a new 29-footer. 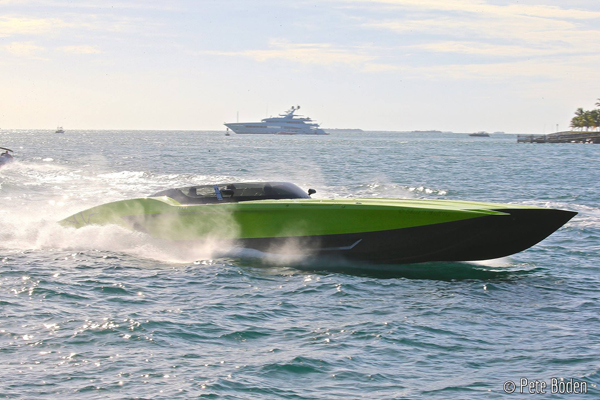 The first pair of power-adjustable Mercury Racing 1550/1350s went into Dave Scotto’s Outerlimits SL 50 in 2015 without much fanfare. But in 2016, sales of the engine caught fire with builders including Marine Technology, Inc., which installed pair in Gino Gargiulo’s 52-foot Lamborghini-themed catamaran, Cigarette Racing Team with its Cigarette-AMG 50 Marauder Monaco V-bottom, Mystic Powerboats with Slug Hefner’s 50-foot Dirty Duck catamaran, Outerlimits with its previously noted SV 50 sportboat DCB with an M35 catamaran and more.

One of the most colorful characters in the history of offshore racing, restaurant/bar owner Micheal Stancombe entered the radio-controlled raceboat world mostly for kicks. But what started as a hobby has become a booming enterprise for the Indianapolis-based businessman as his Pro Marine RC company keeps selling as many models as it can bring into the marketplace to “real” performance-boat owners as well as hobbyists playing on a significantly smaller field.

To see the Formula 430 Super Sport Crossover as simply a big day boat riding the outboard engine-power wave completely overlooks the 60-plus years the company took getting to a point where it could successfully combine three boats in one.

The 43-footer taps all the company has learned about building sportboats, cruisers and — first and foremost in the new model — day boats in more than six decades of operation. That Formula outfitted the 430 SSC with quad Mercury Marine Verado outboards, and still managed to provide a huge swim platform, doesn’t make the folks at the Decatur, Ind., company “trendy.” It makes them smart.

Proving again that they do nothing halfway, the people at Performance Boat Center in Osage Beach, Mo., didn’t just have Skater Powerboats build them a 38-foot Superboat-class raceboat with Sterling Performance power. They hired John Tomlinson, the best throttleman in the sport (at least if a winning record is anything to go by) to share the cockpit with their own Myrick Coil, a skilled racer in his own right. In their first year together racing in Super Boat International’s most competitive category, they brought home national and world titles.

What do Rusty Rahm, Brit Lilly and Jake Noble have in common? They all were rookies on the SBI circuit this season, and they all kicked butt. Rahm and teammate Jeff Harris brought home Unlimited-class national and world titles in Wake Effects, as did the LSB/Hurricane of Awesomeness team of Lilly and Ron Umlandt in the Superboat Vee class. As for Noble, who ran this season in tribute to his late father Robert “J.R.” Noble with Grant Bruggemann in the STIHL Skater cat, he finished fourth overall in the national and third overall in the world Superboat-class standings.