You are at:Home»High/Low»Stories of the Year, Part II

In yesterday’s column, my colleague Matt Trulio discussed the delight (and sometimes sadness) that comes from the enjoyable job we have reporting on the lively performance boat industry. He was spot-on, of course, with his analysis of the past year. It included several gut-wrenching stories that I had to report on, being that I was in town covering the Pirates of Lanier Poker Run and the Lake of the Ozarks Shootout where two unforgettable accidents occurred.

That least enjoyable part of this job happened far too many times this year as we had to report on the passing of several well-known members of the community, including the first somewhat shocking news of the year: when one of the friendliest faces in offshore racing died at his home in Orlando, Fla. Kicking this off with the most negative news, here’s my take on the second half of the top 16 stories of 2016. 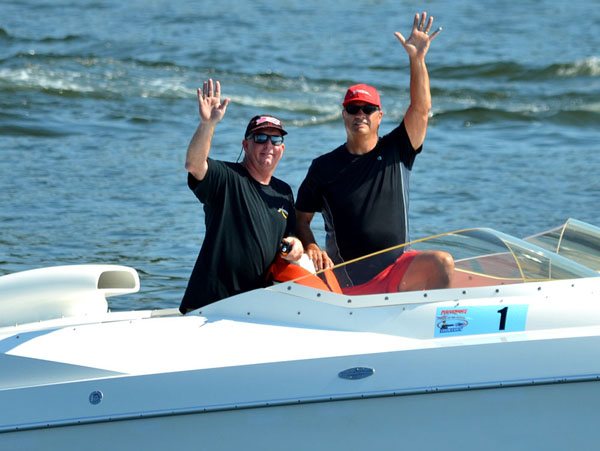 When Robert “J.R.” Noble, the owner of the STIHL Offshore Racing Team, died suddenly in early March, it turned out to the be one of several tragedies to hit the performance boat community hard this year. At least Noble’s death was not boating related unlike what followed throughout the summer.

The loss of Art and Melissa McMahan, Anthony and Tammy Reece, Richie Prince and Bradley Dunphy, and Garth Tagge and Jim Melley to three different accidents in July, August and October, made the season extremely tough to swallow. On the positive side, hopefully those incidents got more people thinking and talking about the aspect of keeping safe on the water.

Powerboaters Don’t Hesitate to Give Back

Now that the negative part of my column is out of the way, let’s switch gears with an overwhelmingly positive story about the charitable side of this sport. I got a firsthand taste of our community’s generosity when the Key West Bash hosted by OffshoreOnly.com and Speedonthewater.com in November raised more than $3,500 for the local organization, Samuel’s House. A few thousand dollars doesn’t compare to the six figure donations raised by events such as the Pirates of the Lanier Poker Run, the Lake of the Ozarks Shootout and the Lake Powell Challenge, but in the span of a few hours it opened up my eyes. 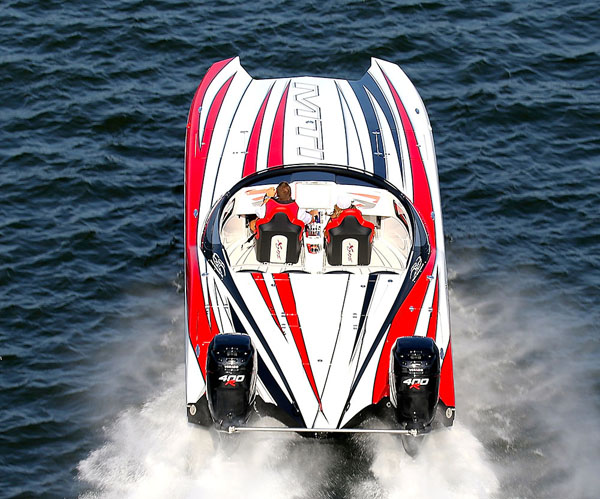 The team at MTI in Wentzville, Mo., was extremely busy in 2016 as it rolled out its first 57-foot center console, a non-production version that was unveiled at the Dubai Boat Show in March, and its first outboard-powered 340X catamaran, which made its debut at the Lake of the Ozarks Shootout in August.

Not only did MTI expand its lineup in both directions with the model additions, the company reconfigured the decks and cockpits on a couple of its catamaran models, including Gino Gargiulo’s Lamborghini-inspired 52-footer powered by Mercury’s 1550/1350 engines that was finished in time for the Key West Poker Run in November. A busy year, no doubt, but 2017 shouldn’t be any less busy.

Big Thunder On the Rise

Behind its new ownership, the celebrated Big Thunder Marine out of Missouri’s Lake of the Ozarks made a lasting impression with its investments throughout the year, and there’s still more to come. Following up its late-2015 addition of Tritoon Town, the company acquired Lake Ozarks Marine in early April and the popular Glencove Marina a couple of weeks later.

The biggest news for performance boaters is that Big Thunder Marine was bringing the Baja Marine, Donzi Marine and Fountain Powerboats lineups back to the lake. Also worth noting is that former Glencove Marina service technician Tony Battiato returned to the shop in October. 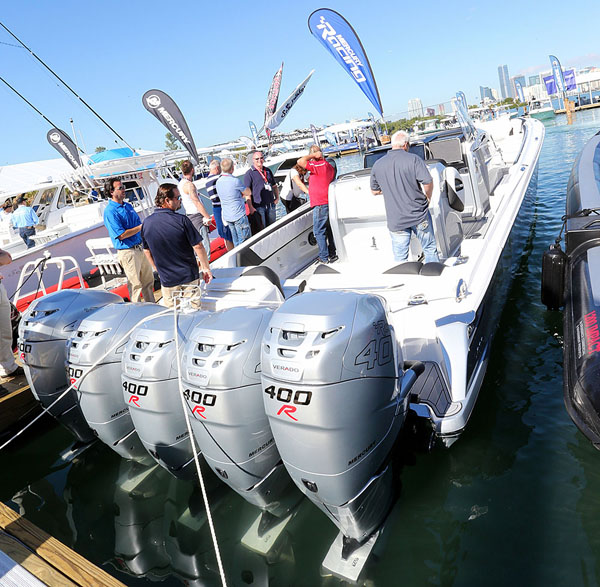 Although it was far from complete, Nor-Tech brought its 450 Sport CC powered by five 400-hp Verado engines to the Miami International Boat Show to provide a few demo rides. Photo by Pete Boden

Between the boat’s incomplete, but demo-ride-ready version that drew tons of eyeballs at the Miami International Boat Show and beyond (thanks to social media), and the delivery-ready model on display at the Fort Lauderdale International Boat Show eight months later in October, the all-new 450 Sport CC from Nor-Tech Hi-Performance Boats (powered by five Mercury Racing Verado 400R engines) was a real head-turner, not to mention a big traffic-driver. The fact that the company — thanks to dealers such as South Florida Performance Boats’ Bob Crow — already has a double-digit list of orders for the 45-foot center console speaks volumes.

Speaking of the Mercury Racing Verado 400R, the outboard engine sure gave us plenty of stories to write about. From the sporty catamarans from the likes of DCB, Doug Wright, Eliminator, MTI, Skater, Sonic and Spectre to the center consoles from companies such as Cigarette, Deep Impact, MTI, Nor-Tech, Statement, Sunsation and more, you didn’t have to go far at a poker run to get a glimpse of the 400-hp engines. The outboards even inspired a new model from Formula Boats, which Trulio hit on in the first part of this list, as well as provided the power for a 28-foot V-bottom from Tuff Marine, a 31-foot RIB from Revolt Custom Boats in the Netherlands and several other types of boats.

Girl Power Shines at the Shootout

There was plenty of news out of the Lake of the Ozarks Shootout in Missouri, but one of the coolest stories from the late-August event was the fact that 10 different women participated in the event. The clear-cut headliner of the group, Summer Richardson brought her Skater 388 catamaran, which she ran up to 176 mph at the Desert Storm Poker Run in Lake Havasu City, Ariz., in April, to the top-speed event and ran 153 mph despite engine issues. Nine other enthusiastic women—Yvonne Aleman and Tristan Garvin (who ran as a team in Devin Wozencraft’s 30-foot Skater), Nikki Amos, Angela Bantle, Carolyn Dorris, Brandi Johnson, Kristy Kaczan, Leslie Miller and Carrie Sixkiller—made a statement that women involvement in the sport. 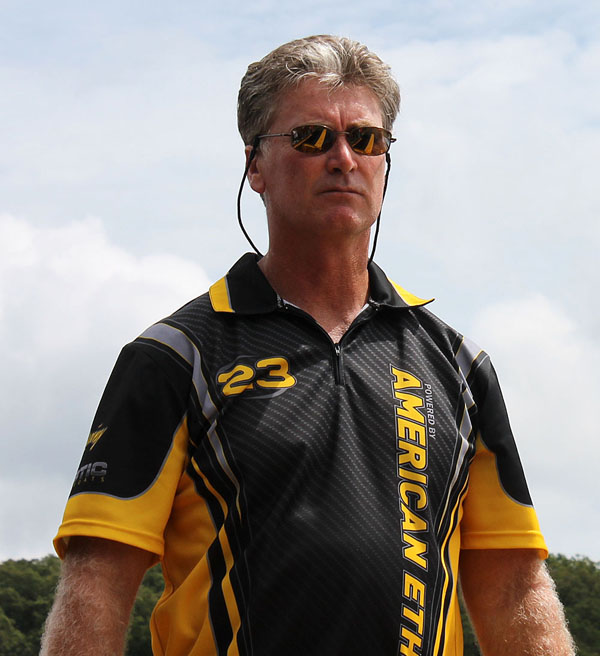 Between high-speed shootouts and luxury performance center consoles, John Cosker had his hand in all things performance boating this year. Photo by Jason Johnson

Last but certainly not least, 2016 just might go down as the year of John Cosker. Not only did the founder of Mystic Powerboats in DeLand, Fla., get inducted into the 2016 Lake of the Ozarks Shootout Bob Morgan Memorial Hall of Fame, a few days later he and Slug Hefner won the event’s overall Top Gun trophy after running 217 mph in Don Onken’s 51-foot Mystic catamaran American Ethanol. That alone would make someone’s year, but Cosker is most likely more proud of the success of his company’s M4200 luxury performance center console and the fact that Mystic will be releasing the 42-footer’s sibling—the M3800—in early 2017.