A Memorial Fun Run honoring Art and Melissa McMahan and Anthony and Tammy Reece, pictured here just before they died in an accident on Georgia’s Lake Lanier, is being held on Lake Cumberland next month. Photo by Jason Johnson

In less than a month, Kentucky boaters and many others from across the country will gather on Lake Cumberland to honor their friends from the lake—Art and Melissa McMahan and Anthony and Tammy Reece—exactly one year to the day from their passing following an accident during the Pirates of Lanier Poker Run on Georgia’s Lake Lanier.

Good memories are sure to be shared and good times are most definitely to be had at the Memorial Fun Run on Saturday, July 15 at State Dock—and everyone in attendance will have a 15-year-old kid to thank for it all.

Yes, a 15-year-old boating fanatic named Tanner Howard whose favorite performance boat was Saddle Up, the iconic Statement Marine 42 Ultimate owned by Anthony and Tammy Reece. Well, Tanner and his parents, Brett and Kerry Howard of Bethel, Ohio. They assisted their son in his quest to honor Anthony—Mr. Black Cowboy Hat himself—who Tanner became close with after meeting him at the Lake Cumberland Thunder Run more than four years ago.

“When Tanner met Anthony for the first time, he told Anthony how much he loved his boat and started going on and on about it, and Anthony said, ‘Dang boy, you know an awful lot about this boat,’ and then he told him to climb aboard,” said Kerry, the mother of Tanner and his younger brother, Blake. “Anthony said he’d be happy to take Tanner for a ride but it would have to be the next morning because he was done boating for the day. The next morning they went for a ride and there was an instant bond. From then on, every run we attended to check out the boats, Tanner would always find Anthony or Anthony would find him.

“We weren’t close with the family, but we always enjoyed seeing them and vice versa,” she continued. “I remember when Blake asked Anthony to sign his shirt and Anthony said, ‘Son, I am not a star, I’m good ole Anthony Reece.’ He really was so great with our boys. After we heard about the accident in Georgia, it was hard to tell them. Tanner was devastated, and he was visibly sad for months. So when he came to us and said he was thinking he should do a memorial run for the Reeces and McMahans, my stomach dropped. We couldn’t tell him he can’t do this because he’s just a kid or that it would be too much work. If he was committed and reached out to the right people to make it happen, we thought why not give it a try?”

The idea grew from there as Tanner found a half-dozen sponsors to help him print Memorial Fun Run T-shirts that will be sold at the event for $10 each with proceeds from shirt and wristband sales as well as an evening auction going to benefit the Lake Cumberland Dive and Rescue to help purchase sonar equipment for the lake. Trifecta Houseboats, Jamie Brown of Painter and Sons in Springfield, Ohio, Mike Sonley Appraisals, a couple of notable performance boaters—Phillip Kile and Joey Lopez—also sponsored the run. 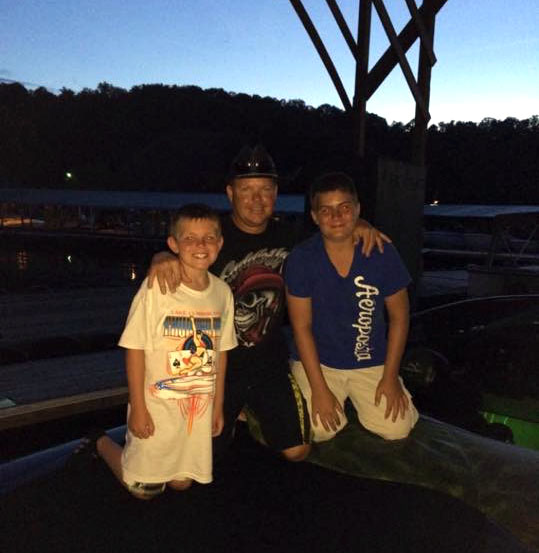 After meeting brothers Blake (left) and Tanner Howard at the Lake Cumberland Thunder Run, Anthony Reece posed for a picture with the enthralled boys on Saddle Up, his Statement Marine 42 Ultimate. Photo courtesy Tanner Howard

“The last time I saw Anthony was at the Thunder Run and I was excited to see him the next month at the Old Hickory Fun Run in Nashville, but that never happened,” Tanner said. “It was devastating—I really didn’t want to do anything. Then around October I started thinking we need to do something to honor Anthony and Tammy and Art and Melissa so I reached out to a few boaters like Mike Goldbaugh and Cory Hakes and asked them if they’d have my back on it. Then I asked my parents because I couldn’t do any of it without their support.

“From there we created a Facebook page and it gained a lot of traction quickly,” he added. “I wanted to do this because I feel like there needed to be something solely and 100 percent about them. They were such great people—they really deserve it.” 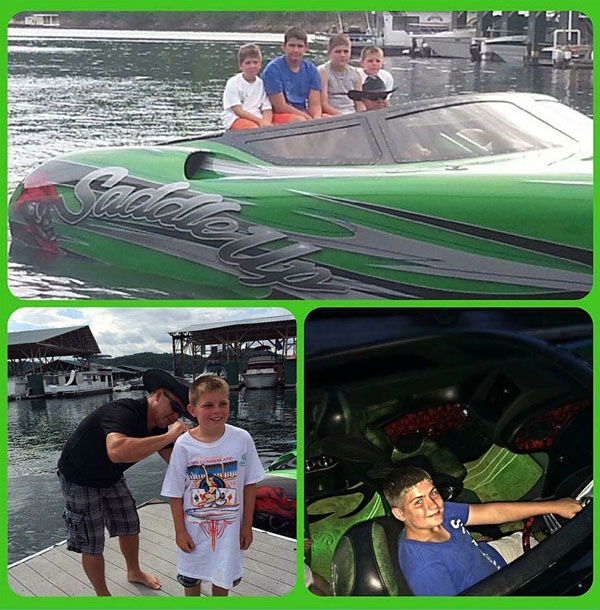 Here are a few images of the Howard family’s encounters with Reece and Saddle Up. Photos courtesy Kerry Howard

According to Kerry, the event is about as low key as it gets. Any boats that want to participate are gathering at State Dock on July 15. A small memorial and wreath service is going to take place at 11 a.m. with boats leaving for Lee’s Ford for lunch around 11:30 a.m., then heading to the dam for a raft-up after. There are no registration fees so lunch is not provided. Neither is dinner at State Dock, but there are a couple of bands scheduled to perform at the Tiki Hut on Saturday night during the post-run festivities.

“I met Tanner, his little brother and their parents at Anthony’s memorial service, and Tanner told me that he had followed Saddle Up from day one and had gotten to know Anthony over the years,” said Nick Buis, who owns Statement Marine in St. Petersburg, Fla., and considered the Reeces close friends. “I think what he’s trying to do is cool. All of us at Statement support and applaud his and his family’s efforts as they try to recognize the Reeces and McMahans.”

If you’d like more information on the run, be sure to check out the Memorial Fun Run Facebook page.