You are at:Home»In Memoriam»Keeping the Lickity Split Spirit Alive

With the Lickity Split team in their hearts, you can count on the legions of DCB faithful to carry the candle in honor of their friends, Brad and Connie Kloepfer and Paul Selberg. Photo courtesy Kenny Gonzalez

Somewhere between Needles, Calif., and Searchlight, Nev., on my return drive from Lake Havasu City, Ariz., to the McCarran International Airport in Las Vegas on Saturday it occurred to me that even though I won’t get the chance to see my friends Brad and Connie Kloepfer at any of the summer events where I was expecting to hang out with them, we—myself, fellow media outlets, event organizers and the DCB Performance Boats team (and its supportive family)—can make sure that Brad, Connie and their friend, Paul Selberg, all of whom died following an accident on Lake Havasu in late April, are never forgotten.

Following Saturday’s emotional and uplifting service for the Kloepfers at Calvary Baptist Church, as well as the hour or so I spent at the reception at the Nautical Beachfront Resort before leaving to catch my flight, I’m fairly certain their family members and friends will make sure that never happens. It was apparent among the different people who took to the church stage to talk about their dad, sister, mom, friend, co-worker, etc., that the Kloepfers were surrounded by a strong network of incredible people.

And as someone who got to know Brad and Connie through covering the Lickity Split DCB M35 Widebody catamaran powered by twin Mercury Racing 1350 engines extensively on speedonthewater.com, that makes complete sense to me. They were extremely welcoming people—almost Midwestern-like even though they were from California—and I was honored when Brad’s sister, Kim, asked me to speak at the service Saturday.

I’m a way better writer than a public speaker so I respectfully told Kim she could find someone better than me. She insisted, so I graciously agreed to get up in front of the group, not knowing that it was at a church with a full sound system, video monitors, production area, and yeah I’m guessing close to 300 people. Besides my high school graduation, I don’t think I’ve addressed a larger crowd. 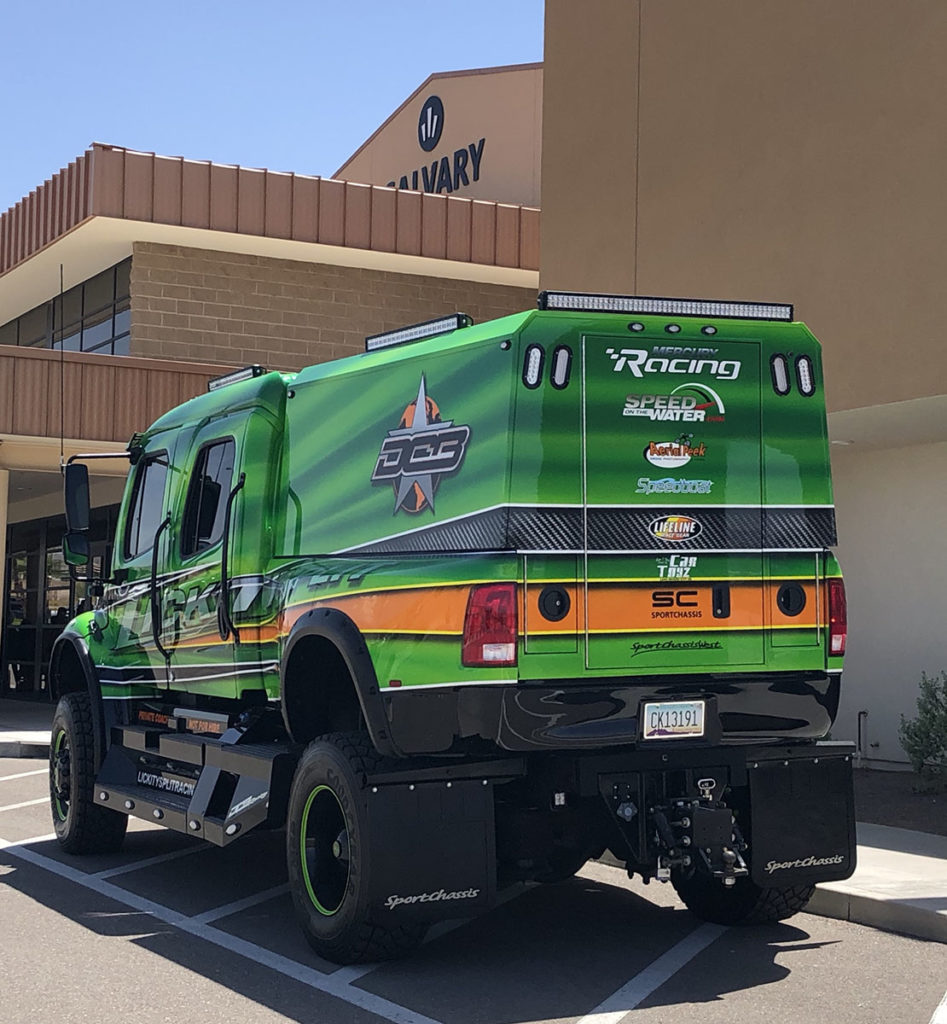 The Lickity Split SportChassis was on display at the service for Brad and Connie Kloepfer on Saturday. Photo by Jason Johnson

The nerves were rattling, no doubt, but I got through my couple-minute speech and closed it with a story about Brad and how he did one of the coolest things ever for speedonthewater.com. I knew I wasn’t anywhere near as close to Brad and Connie as pretty much everyone in the building, which included at least 50 representatives from the DCB extended family, so I figured I should share something personal about Brad that everyone else could relate to—so I did.

I showed up in Havasu for the 2016 Desert Storm Poker Run and got to see the new Lickity Split tow rig before the annual Street Party. Brad told me to go check out the back and my jaw about hit the floor as the back door of the SportChassis he and the boat’s owner, J.P. O’Donoghue, recently picked up had a speedonthewater.com logo on it.

As I begin to tell him how awesome that is, he looks at me and says “That’s paint.” I responded, “You didn’t.” He said, “I told you we were going to do it.” He must have been able to see the disbelief on my face still because he said “Dude, that’s paint. That’s our way of thanking you for everything you guys did for us.”

That’s the kind of guy he was. And that’s exactly why the team at DCB is going to miss him so much. The dedicated dad, retired police officer/detective/secret service agent, and the ambassador of Lickity Split Racing was an amazing ally and asset. 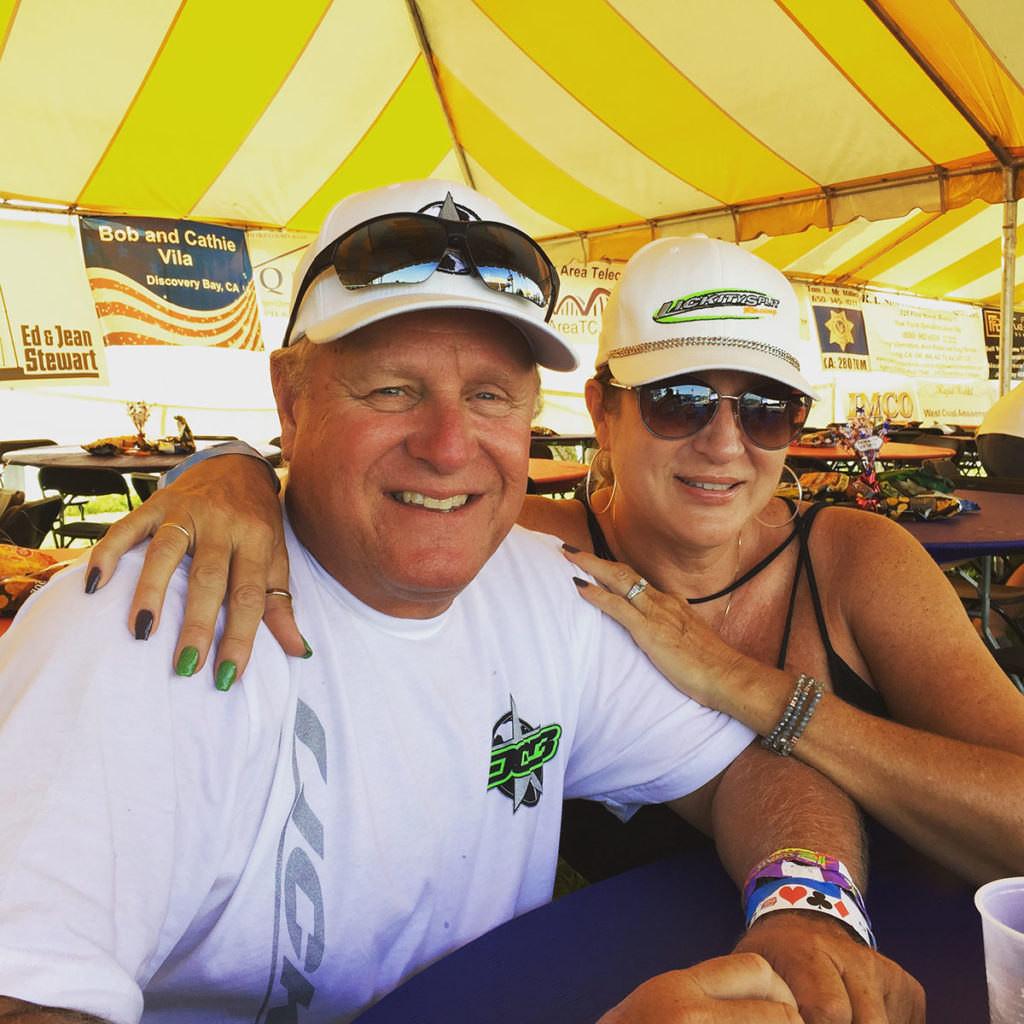 From the upcoming Lake Powell Spring Run to the Texas Outlaw Challenge, Lake of the Ozarks Shootout, Lake Cumberland Poker Run, Lake Powell Challenge and more, Jeff Johnston of DCB said the company, and likely some of its customers, are going to fly the Lickity Split banners at every event they attend. He expects to do some type of memorial as well at the annual DCB Regatta in September.

In closing, I hope that Brad, Connie and Paul rest in peace for eternity, and I wish that the families affected by the tragedy continue to make sure that their family members’ legacies live on forever. I’m certain this community will do its part for Lickity Split.