You are at:Home»In Memoriam»Steve Tripp Remembered

Tripp waits in line at the 2012 Lake of the Ozarks Shootout to receive his best in class award. (Photo by Jason Johnson.)

I remember meeting Steve Tripp, the owner of Revolution Performance Marine (RPM) in Harpersville, Ala., for the first time at the Powerboat Magazine Performance Trials in Parker, Ariz. It was September 2006 and I was still a “newbie,” just a year into my managing editor position with the now-defunct magazine.

As was Tripp, who was extremely proud to have his very first 26 Redline being tested by the magazine’s team, which included test drivers Bob Teague and John Tomlinson. Less than a year later, Tripp—and the boat company he founded after selling his software business—received an award for Outstanding Sport Catamaran Value. The 26-footer with a single Mercury Racing HP525EFI engine blew the socks off of Teague and Tomlinson after running 95 mph on the Colorado River. 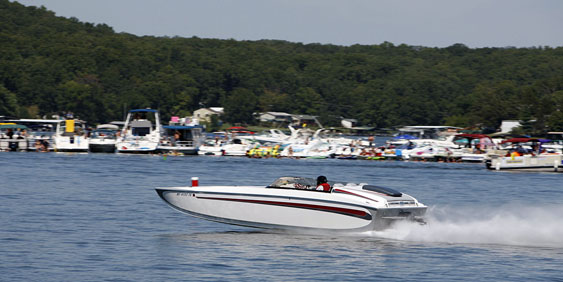 Revolution Performance Marine’s Steve Tripp, who crashed while testing yesterday afternoon, loved going fast as evident in his participation in the Lake of the Ozarks Shootout in Missouri every year. (Photo by Robert Brown.)

Fast-forward almost eight years and Tripp and his right-hand man Mark Kent are posting video on OffShoreOnly.com of the company’s latest 26 Redline with a 1,200-hp GT Performance engine running 143 mph.

Jump to yesterday afternoon on the Coosa River and it pains me to put in it writing that Tripp wanted to reach 150 mph so badly in one of his rock-steady 26-foot catamarans that he ended up losing his life after the boat crashed during a test run in the River Rub subdivision. (Here’s the thread on OSO.)

Although as of Wednesday morning Tripp’s body had not been recovered, the outcome was apparent. The only good news is that Kent’s life was spared after suffering minor injuries including a broken wrist. I spoke with Kent this morning and he was down but grateful to be at home with his family.

“I put my life in Steve’s hands for a long time and I never second guessed him for a minute,” Kent said. “We didn’t have a clue being out there without life jackets on. I know I’m lucky to be alive. I feel so bad for Steve’s family—he and his wife have four young kids.”

Dan Jape, who on his way home from the Miami International Boat Show yesterday when Tripp called him to discuss a motor and let him know the boat had reached 147 mph and that 150 was in reach, couldn’t believe his friend was gone when he heard the news.

“Steve was a prince, especially in this industry,” said Jape, who is from Georgia and owns a 36 Daytona Speedster from Eliminator Boats. “He was one of those guys who always did the right thing. The toughest part about this is that he left a wife and four kids behind.” 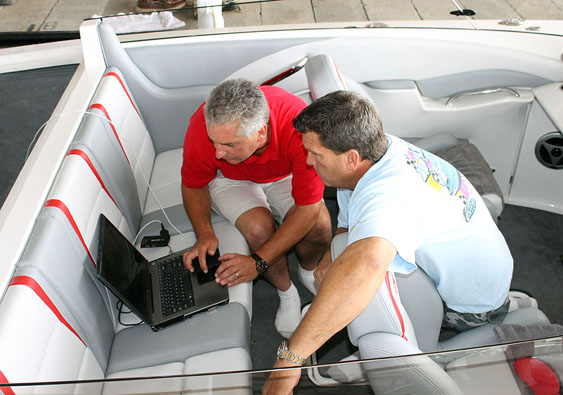 Tripp and Mark Boos of Precision Marine Performance Engines look over engine data from the docks at Captain Ron’s during the 2012 Lake of the Ozarks Shootout. (Photo by Jason Johnson.)

Clearly shook up but also a bit angry, one of Tripp’s closest friends and customers, Jeff Ford, also felt terrible for Tripp’s wife, Rachel, their son, Ryan, and their daughters, Jillian, Megan and Sara.

“I told Steve you need to wear a damn life jacket,” said Ford, who lives in Louisiana and owns a 26 Redline that we tested for Powerboat as well. “I said if for nothing else do it for your family so if something God forbid does happen, at least they can have you. He’d just say, ‘Dude the boat is rock-steady.’ I’m really tired of losing my friends.”

Amen Jeff. I can’t believe that I won’t see Tripp like I do every year at the Lake of the Ozarks Shootout or the Desert Storm Poker Run. I also can’t believe I’m writing a column like this just a few weeks after finishing a feature in Speed On the Water magazine emphasizing safety in our sport.

Rest in peace Steve, and my sincere condolences to the Tripp family.