You are at:Home»In Memoriam»Watch This Kid: An Appreciation for Mike Fiore 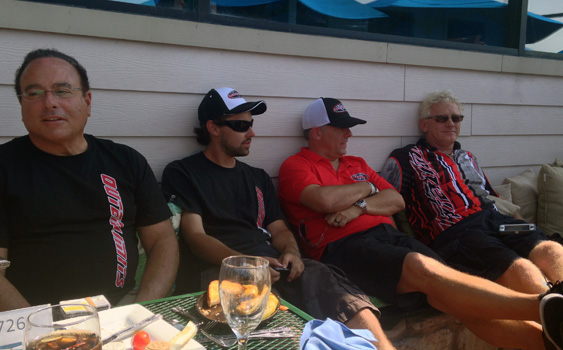 Mike Fiore (in red) chilled out with three of his closest friends (from left)—Joe Sgro, Dan Kleitz and Steve Curtis—during the Buffalo Poker Run.

In September 1997, Powerboat magazine held the East Coast leg of its annual Performance Trials in Panama City Beach, Fla. I’d been with the magazine a little more than two years as its managing editor, which made me—by far—the most “junior” person on a test team that included Eric Colby, Powerboat’s editor in chief, Bob Teague, its lead test driver and technical editor, and head photographer Tom Newby.

When we arrived at the launch ramp, a young man slaving to wipe off the morning dew from the deck of the most beautiful V-bottom I’d ever seen caught my eye. The guy working hard on the boat’s deck looked so young that I figured he was an employee of the company that built it.

“Watch this kid,” Teague said to me, nodding toward the man on the boat, as we walked toward it. “He has his act together. He’s going to do things.”

That kid was then 27-year-old Mike Fiore, who had founded Outerlimits Offshore Powerboats four years earlier in Holbrook, Long Island, N.Y., and I watched him, so to speak, as a journalist for the next 17 years. 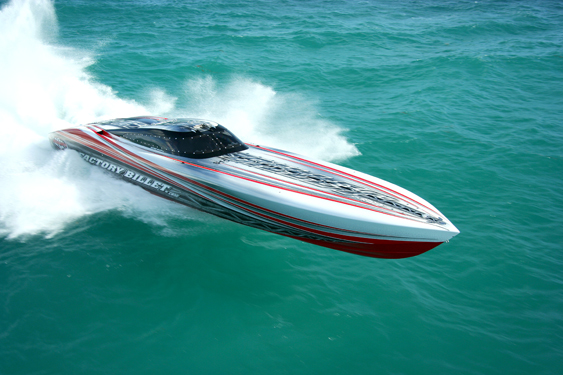 In the past 21 years, Outerlimits built more than 400 custom go-fast boats, many of them iconic in performance boating community. (Photo courtesy Outerlimits Offshore Powerboats.)

A few years after Panama City, Newby and I watched Fiore—from a helicopter—as he and his father, Paul, ran one of the 400-plus custom performance boats he eventually built during his 21-year career off the coast of Rhode Island. Several years after that, I watched him beat himself silly in huge seas off Malta with his longtime friend and offshore racing partner, Joe Sgro, in a Powerboat P1 race.

“The money we spend and some of the crazy stuff we do—we must be out of our minds,” said Fiore, who injured his back during the race, with his trademark cackle once he and Sgro were back at the docks.

From afar via phone calls and text messages, I watched Fiore steer his company through what he called “the economic implosion of 2008,” a time he also described as “the low point” of his boat-building career. Standing between him and his father on the shores of the Pamlico River in Washington, N.C., in late April this year, I watched one of the canopied boats he built claim the title of “World’s Fastest V-Bottom” by setting a kilometer-run record of more than 180 mph, an achievement he described as “a high point” of his boat-building career.

“It’s pretty freakin’ cool,” he said a few minutes after breaking the record. “This took 10 years of patience and letting some of the insults roll off our backs to finally reclaim the V-bottom speed record.” 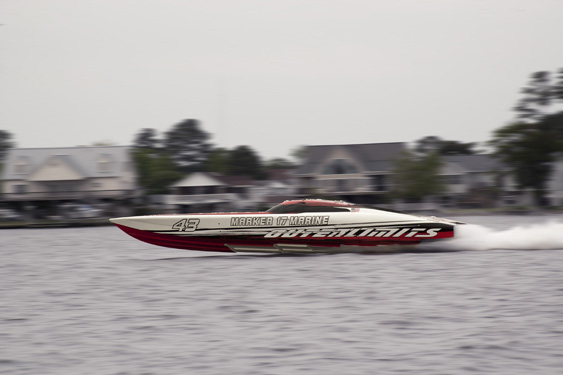 In August, I watched—as a passenger buckled into one of the rear seats—Fiore and Sgro run that same SV 43 V-bottom in the Buffalo Poker Run in Lake Erie in New York.

The last time I watched Mike Fiore, he was throttling his company’s new 46-foot canopied catamaran with its owner, Joel Begin, in the Lake Of The Ozarks Shootout in Missouri a couple of weeks after the Buffalo event. I had no idea it would be the last I would watch him do anything.

As Teague predicted 17 years ago, Mike Fiore did things—far more than those mentioned here. He was fiercely proud of the boats his company built, but he always downplayed his role in building them. In his short life of 44 years, during which he had two children, Jet and Moxie, with his wife, Shonda, and his daughter Sophia from a previous marriage, he didn’t just live up to the potential forecast by my former colleague at Powerboat. He exceeded it many times over. And yet Fiore didn’t romanticize his accomplishments. He kept things simple.

“There’s nothing else I really want to do other than get up and build boats,” Fiore said in a July/August 2013 feature in Speed On The Water digital magazine. “If I won the lottery tomorrow, I would still do the same exact thing. Nothing would change. It’ll be that way I’m sure until the day I die.”

And so it was.