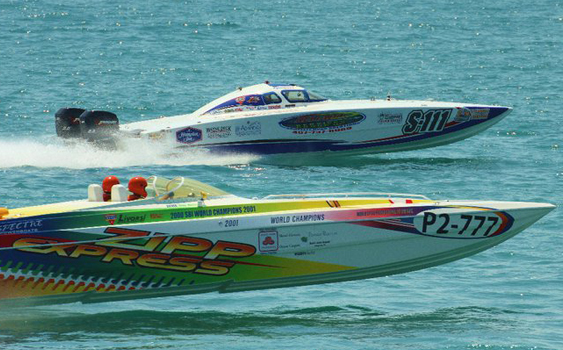 Zip Express has been one of Pilini’s most successful 36-foot cats on the offshore racecourse.

Jay Pilini, the man behind and in front of Spectre Offshore Performance in Clearwater, Fla., has seen his share of ups and downs in his 30 years in the high-performance powerboat business. On that, you’ll get no argument for the soon-to-be 53-year-old current designer and builder of performance-oriented center consoles and former designer and builder of Spectre and Motion go-fast catamarans. From building some of the most celebrated cats on the offshore racecourse to seemingly endless litigation and acrimonious splits with partners, the guy has seen it all. Yet Pilini is a survivor—a chameleon of sorts—and his longevity as a builder with 30 years in the business speaks to his adaptability.

Though he prefers not to dwell on the past, Pilini’s resume is impressive. In 1983, he started Motion, which built white-hot, at least at the time, 25- and 35-foot cats. Ten years later he stared Spectre, which offered equally sizzling 30-, 32- and 36-foot cats—with a 42-footer in the tooling stages—before he sold the company in 2006.

Next up for Pilini was a series of center consoles, including one with diesel power, for his then-new company called Spectre Sportfishing. The line included 24, 34- and 37-foot conventional V-hulls with non-stepped pad bottoms. But the bottom, so to speak, of that market fell out so Pilini sold the tooling and “started doing what a lot of manufacturers were doing, namely repowers of boats we had built and boats from other builders.”

In 2009, Pilini partnered with Tony Frisina, owner of Frisini Powerboats in Fort Pierce, Fla., to build Spectre catamarans. The arrangement lasted about a year. Beyond that, Pilini will not comment.

“I don’t like to dwell on the past,” says Pilini. “I’d rather focus on what’s happening now and what we’re doing now. I’m excited about that.”

The latest model from Spectre Offshore Performance is a 35-foot center console.

What’s happening now for Spectre Offshore Performance is what’s happening for a lot of go-fast powerboat builders, meaning the still burgeoning center console market. To that end, Pilini is offering an aggressively priced 35-footer—his latest model—as well as a 31-footer.

“There are signs of life in the market—people are coming back and starting to spend a little money if they see value,” says Pilini. “I have always been really good at providing a real good boat for the money. I don’t have the overhead that a lot of top-heavy companies have. We have always been able to provide a better boat at a better price. I am hands-on 100 percent of the time, every day. A lot of the time, I spend 50 to 60 percent of my time working in the shop. Our boats still have the same fit and finish that everybody was used to from Spectre. I still have the same painter I’ve had for 13 years.” 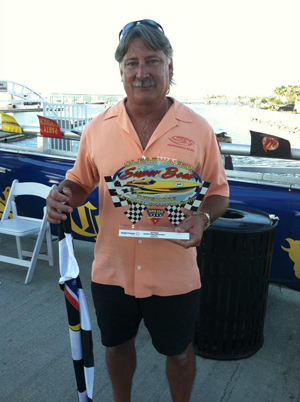 Most recently, Pilini’s desire to build has extended past powerboats and into the go-fast boat community itself. And to that end, he has founded the Tampa Bay Powerboat Association, which has its first fun-run event scheduled for April 5.

“We had a boat club here that I started in the mid 1980s, but over the past four or five years it fizzled,” says Pilini. “But we were a very strong club. I like the idea of getting people out there and doing something again, so I decided to create another organization. So we created a Facebook page where people could say, ‘Hey, I’m going to Egmont Key or I’m doing a raft-up, who wants to come?’ And it’s taken off.”

At present, the club has 160 members, according to Pilini. Almost 30 boats have registered for the first event, which is sponsored by Spectre Offshore Performance, and will start with a raft-up and lunch on Shell Key and will finish with a party at Billy’s Stone Crab restaurant.

“New people are coming into the sport,” says Pilini. “So we have to help give them something to do with people who share their interest. It’s a good thing—a really good thing. It helps all of us.”

That’s yet another hat for Pilini, one in which he seems to be quite comfortable and has no trouble swapping for his boat-builder chapeaux.

“We are going to come out with a bigger center console in the 39-foot range,” says Pilini. “After that, I am definitely doing a performance cat in the 33-foot-ish range. It’s not my first priority, but we will do it between our other projects.”

He adds, “I really like cats,” he adds. “They are the most fun things you can possibly run on the water.”