You are at:Home»Industry»Catching Up With John Cosker 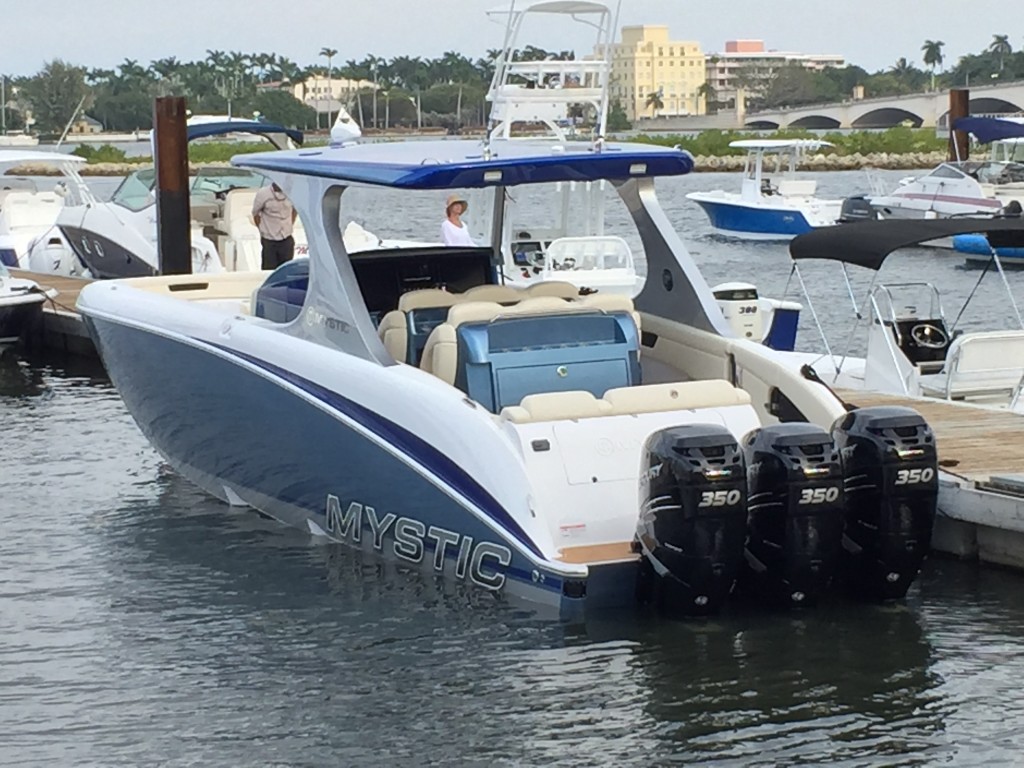 That John Cosker, the man behind Mystic Powerboats in DeLand, Fla., chose to travel 200 miles by water from Daytona Beach to Palm Beach in a center console—one he designed and his company built—late last week speaks volumes on the evolution of his custom boat company. Sure, he needed to have at least one M4200 luxury center console on display at the Palm Beach Boat Show, and he actually ended up with two. But Cosker could have had a staff member haul his latest 42-footer, hull No. 11 delivered out of 15 sold since February 2015, to the event.

Instead, he decided to run the boat, which was built as a demo model for global Mystic dealer Scott Sjogren of Shogren Performance Marine in McHenry, Ill., to the show.

“The boats are just fun,” Said Cosker. “It took about five hours to get there, and I ran anywhere from 45 to 60 mph. It was a very enjoyable trip.”

Coming from a man who’s spent more time at 200-plus mph on the water, thanks to his own Mystic C5000 catamarans, than just about anyone, that’s saying something. 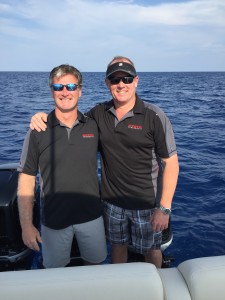 John Cosker (left) and Scott Sjogren worked closely together on the M4200, which dominates Mystic’s production.

With his the center console and a new 44-foot catamaran to build in addition to his vaunted 50-footer, Cosker expected the first six months of 2015 to be challenging. He knew going from one model to three, with the center console likely to be leading demand based on market trends, was ambitious. And the anticipated degree of difficulty did not disappoint or surprise him.

“The big thing was getting good managers in place, from parts acquisition to lamination,” he said. “Everybody stepped up and we hired a few new people. We have 26 people on staff. I hear some companies produce more boats with fewer people, and other companies produce fewer boats with more people. As we introduce new models we’ll add new people.”

To that end, Cosker said he’s working on, as in the early drawing stages, another luxury center console model. But he’s not sure if it will be larger or smaller than Mystic’s current 42-footer.

“I’m working on smaller and bigger models,” he said. “We’ve had a lot of people say they’d like something smaller, something they can run with twin outboards and will fit on a certain-size lift or in a location where a 42-foot boat is too big. We’ve also had people ask for something with a bigger cabin, something you can take to the Bahamas and stay in comfortably for two or three nights. I am hoping that in time we’ll eventually go both ways.

“I dabbled around in the center console market quite a bit with design work for other companies, but I never envisioned building them,” he added. “But I have to say I really like the market—it’s like building luxury sport utility vehicles, and the owners are really down to earth.”

Although center consoles are dominating Mystic’s sales, the company also has a 50-foot catamaran and another 44-footer—hull No. 4—in production.

“The C4400 catamaran is for Don Onken, and it’s our first canopied 44,” said Cosker. “He’s not sure if it’s going to be an offshore raceboat or a shootout boat.”

With production now humming along at Mystic, Cosker find himself less on the floor working hands-on in whatever capacity he’s needed and more in his office doing what he—as a trained naval architect—does best. And that means design. Designing boats, not building them, always has been his primary professional passion.

“I have been working to make myself obsolete in the shop, and I’m almost there,” he said. “Now I can spend more time drawing and testing boats, which is where I want to be. I am really happy right now.”