You are at:Home»Industry»Catching Up With Tony Frisina 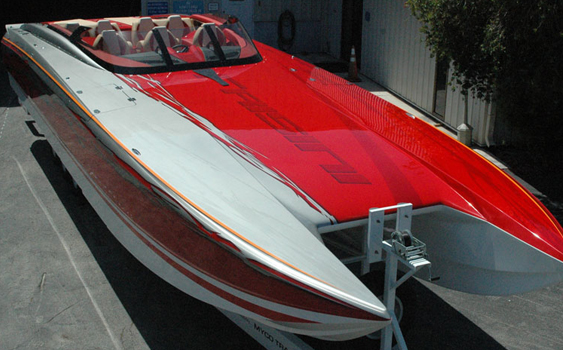 Frisini kicked off its catamaran series with a 43-footer.

Yesterday was the perfect day to interview Tony Frisina, the owner of Frisini Motorsports, which builds the Sonic, Hypersonic, Frisini catamaran and Spectre catamaran lines. That’s because Hurricane Sandy, which was due to slam the Jersey Shore with all its might a few hours after we spoke, had him housebound. He was trapped at his home in Barnegat Bay.

“Right now, we’re all forced to stay in,” said Frisina. “No one is allowed on the roads after 4 p.m. Between Friday and Sunday, we moved like 65 boats into our Arrow Marine Services facility in Toms River [N.J.]. We store 125 boats there. I could have taken in more boats, but by noon on Sunday I had to start turning people away. We didn’t have enough space or equipment to store more boats on.”

“We’re just sitting here watching the news,” Frisina continued. “Atlantic Street in Atlantic City is underwater. Seaside Heights Beach is gone. The ocean breached Long Beach Island in three places. And the strongest part of the storm hasn’t even hit yet. It’s not supposed to be here until 11 p.m. They are predicting that 80 percent of the state will be without power. I am 57 years old, and I have never seen anything like this.” 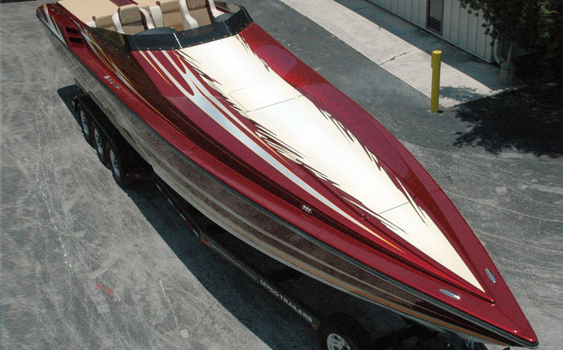 Only a hurricane could contain a force of nature like Frisina for more than a few hours, and you can bet that when Sandy clears out of New Jersey and he is sure all his friends and family members are safe, it will be back to business with his performance boat lines. Frisina admits there has been more than a little confusion surrounding the brands he owns and builds, and to that end he is streamlining.

The original, non-stepped-hull Sonic V-bottom line will keep its name. Their updated, stepped-hull siblings, the first of which is a 38-footer, will be called Hypersonics. With the exception of the 32-foot Spectre catamaran, all cats under the Frisini Motorsports umbrella will be called Frisini cats.

At present, there is one cat in the Frisini line, a well-known 43-footer owned by Dr. Gabe Jasper. But that’s about to change.

“Doug Wright came in and gave us a few pointers, and with his help Chris Dilling and I designed a new 32-foot cat,” said Frisina. “Chuck Penwell did the tooling. The 32 Spectre is a great boat, but it was designed in 2003 or 2004. We felt like we needed an updated model with our 2012 and 2013 technology. So we designed a cat that could handle outboards or even Mercury Racing 1350s—believe it or not we actually have a few customers who are interested in them.

According to Frisina, the Frisini 32 cat will debut at the 2013 Miami International Boat Show in February. He said he plans to roll out a 38-foot cat a couple of months later. 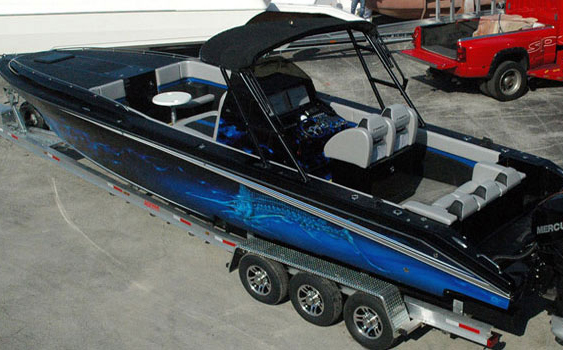 This intricately painted Frisini Motorsports 390 center console went to a buyer in Massachusetts.

“I don’t want cats all to look the same,” said Frisina. “But I do want them to have certain features where you look at them and you know they are a Frisini.”

Not all of the Frisini Motorsports movement is on the catamaran side—far from it.  What was originally to be called the “Aronoli 42” V-bottom has been brought into the Hypersonic family and renamed the Hypersonic 42. The 42-footer, which already has a buyer (as does every boat the company builds, according to Frisina), is in production and should be finished in early 2013.

But the big news, so to speak, is that Frisini plans to roll out a 51-foot Hypersonic this summer

To top it off, Frisini is building a 36-foot center console for Oregon Custom Marine, its dealer in the Pacific Northwest.

“We’ve been pretty quiet about all this, which I guess is true to form for us,” said Frisina. “But I guess the cat is out of the bag now. We have a lot of stuff going on for 2013.”