You are at:Home»Industry»Checking In With Hering Propellers 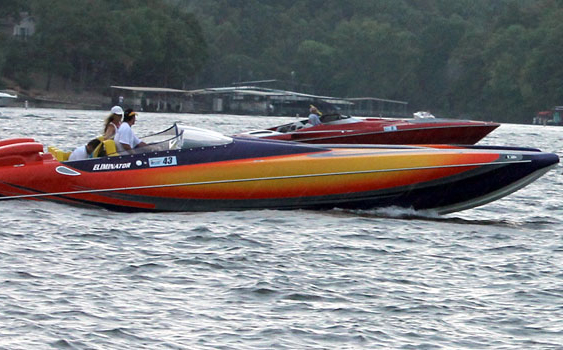 Hering propellers put the power to the water during Greg Olson’s 192-mph at the 2012 Lake of the Ozarks Shootout.

If you follow high-performance powerboating in even the most casual manner and you don’t happen to live under a rock, you heard that Greg Olson captured the Top Gun title at this year’s Lake of the Ozarks Shootout with a run of 192 mph. You likely also heard that he did it in a 33-foot Eliminator Daytona catamaran. If you’re really good, you might even know that the cat was powered by twin 1,800-hp monster engines from GT Performance.

Now, what propellers did he use for his blistering run?  I’ll kill the suspense—or the time you’ll waste on a fruitless Internet search—with the answer: Hering 16-1/2” x 40” five-blades with 18-degree rake angle.

“I had to leave the Shootout early for a wedding,” says Jeff Johnston, the vice president of sales and marketing of Hering Propellers in Marysville, Wash. “When I landed I had a text that said Greg went 192. I was like, ‘Holy crap, that’s fast! I was surprised—and stoked.”

Johnston, company owner Jim Hering and the rest of the crew at Hering have more to be stoked about than Olson’s amazing run, although that’s a much-appreciated feather in their collective cap. According to Johnston, their 2012 production and sales numbers are slightly ahead of their 2011 numbers. That might not sound like anything for them to get fired up about, until you consider that the 2011 numbers were 50 percent higher than the numbers of 2009 and 2010—what Johnson calls the “the slump years.”

“Most of our business, about 75 percent of it, is still coming from the No. 6 drive stuff,” says Johnston. “That’s still a really solid market for us. A lot of people are still repowering, re-gearing and re-propping their boats. We do a lot of business in that segment.

“With the new Mercury Racing 1350 and M8 drive package, Mercury has most of the propeller market,” he continues. “We’re trying to figure a way to get into that market. We already have propellers for it, but with the massive torque of those 1350s—they did such a good job on that engine—we’re developing new cuts [thickness in various portions of the propeller blades]that can accommodate higher tolerances.” 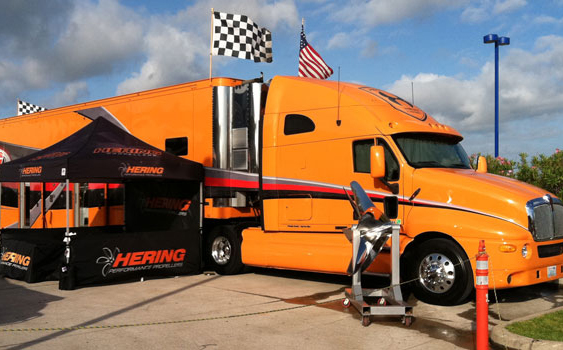 A familiar sight on the poker run and offshore racing scenes, the Hering support vehicle has been sold to Qatar—but Hering’s presence is anything but long gone.

Not all of the current and future initiatives of the company, which was sold back to Jim Hering earlier this year, will focus on the high end of the prop market. In particular, says Johnston, Hering is working on in-house processes to lower the cost of its outboard engine propeller line.

“Our propellers cost about twice as much as standard outboard propellers from Mercury and Yamaha,” Johnston explains. “Our propellers are manicured, CNC-machine-finished, dynamically balanced products. “But is going from 64 mph to 66 mph worth the price? We’re trying to work on our processes to reduce the cost and get down the prices. That’s our goal.”

What you won’t see from Hering in 2013 is the company’s support truck, which was sold to the Qatar offshore racing team for its upcoming United States racing campaign. The vehicle, which was used for on-site propeller repair and Hering apparel sales, was on-hand and usually buzzing with visitors at most of the major high-performance boating events for the past five years.

“The trailer really got us on the map, but it was part of a five-year marketing plan,” says Johnston. “Sheik Hassan approached us and purchased it—we only took it to one event this year. We got everything we needed out of it. It was an effective marketing vehicle. We might get a smaller trailer at some point, but we’re turning our marketing initiatives to online and print.”

But that doesn’t mean Johnston, who to a large degree has become the public face of Hering Propellers, will vanish from the go-fast boat event scene. He just won’t be staring out at the world from under an awning in front of a tractor-trailer.

“I’ll still be out there, of course,” he says. “I’m heading to Key West next month as always. I’ve got to be there support our customers and represent Hering. In fact, I can’t wait to see everyone.”