You are at:Home»Industry»Checking in with Teague Custom Marine 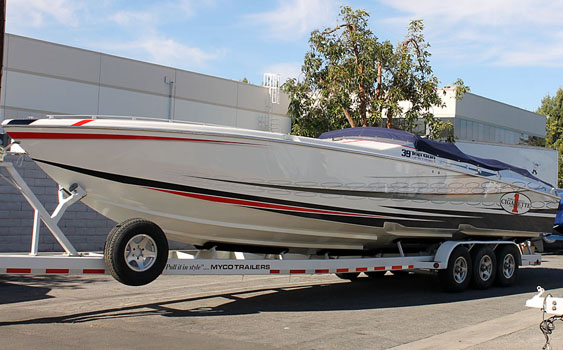 This 39-foot Cigarette Racing V-bottom is at the Teague Custom Marine shop awaiting its rebuilt Mercury Racing 850SCi engines, which are being upgraded to 1,075-hp power plants.

From a 21-foot deckboat and a 39-foot twin-engine V-bottom to a Grand National raceboat and a 44-foot offshore catamaran, you never know just what kind of boat you’ll come across at Teague Custom Marine (TCM) in Valencia, Calif. And thanks to 30,000 square feet of space, the company’s parts lists and variety of engine, drive and propeller choices are impressive.

For more than 40 years, the company founded by world champion offshore racer Bob Teague has taken pride in “putting the ‘custom’ in Teague Custom Marine.” I had planned to write this column several weeks ago after spending a few hours scoping out the latest projects and products at TCM in early April. Well it’s officially May now and I’m just getting to the story after some more timely columns filled this spot the past couple of weeks.

Full disclosure first: I’ve been close with the Teague Custom Marine family for many years since the Powerboat days when Teague was the magazine’s lead test driver and key contributor. Now we’re linked through speedonthewater.com as Teague is the technical editor for the digital magazine. I’ve worked on several projects at the shop over the years and even attended last year’s wedding of Cherilyn Teague (Bob and Andrea’s daughter) and Josh Noack, a skilled rigger with the company. 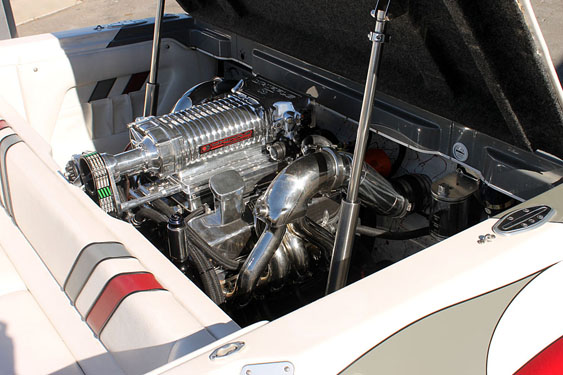 As usual I was thoroughly impressed during my latest visit to the Southern California shop, in which I bumped into Paul Ray, the president of Ilmor Engineering and Ilmor Marine, and Gene Willen, the owner of Howard Custom Boats. Along with standard service work and engines being built in house, the variety of projects happening at TCM was noteworthy. While I can’t highlight everything in this column, here are a couple of cool things that were going on.

John Teague, Bob’s son, filled me in on a 21-foot Commander Boats deckboat that TCM recently repowered. The boat’s previous engine was a 425-hp MerCruiser 496 Mag HO, and rather than go with a slight power upgrade, the owner opted to more than double the ponies and have TCM install one of its 1025 EFI engines. The 540-cubic-inch engine, which features a Whipple Superchargers 4.0-liter twin-screw compressor and redesigned throttle body, made the boat night-and-day different.

The boat went from a 65-mph boat to a 105-mph boat with dramatically improved acceleration, according to John. Obviously the increase in power is evident, but thanks to the upgrade to full hydraulic steering and IMCO Marine’s SCX drive with its latest blueprinted lower unit, the 21-footer is even safer as its tracking and handling at all speeds is much improved.

“The boat is a hot rod in every aspect, but it’s much more usable now, too, if that’s the right word,” John said. “The owner tried trim tabs and other things and he literally said it took 30 seconds to get on plane. Now the boat gets on plane in less than 10 seconds and is much more functional with a group of friends and everyone’s gear on board.” 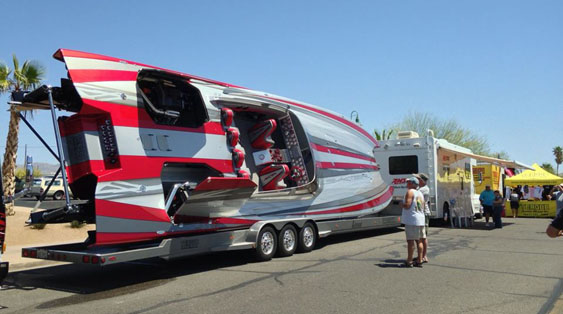 Also in the shop was a pair of Mercury Racing 850 engines that were being upgraded to retuned 1,075-hp power plants via a TCM rebuild to be re-installed in a Cigarette Racing 39 Top Gun Unlimited. (There also were two other sets being upgraded to TCM’s 1225 package at the same time.) Not yet finished but in the works was a Domn8er Powerboats deckboat project that used to have a 625-hp Ilmor engine. The deckboat is getting a 1,025-hp engine to go along with a totally rebuilt and re-gelcoated transom and bilge compartment.

And yet another project—that I will leave for another story since it’s in the very early stages—is a Fountain Powerboats 42 Lightning that will be receiving a pair of short-stroke 572 engines from TCM that are expected to produce between 1,500 and 1,600 hp on the dyno when finished.

Finally, I spent additional time with the TCM crew a few weeks later at the Desert Storm Poker Run in Lake Havasu City, Ariz., and was just as impressed at how hard the team worked and how much everybody pitched in to get customers on the water, sell merchandise, raise money for a local charity and put out any fires during the event’s street party, poker run and more.

A special thanks goes out to longtime TCM employee Eric McCarthy who assisted speedonthewater.com during the Street Party. I wasn’t the least bit surprised when someone wearing a Teague Custom Marine shirt stepped up to help.