You are at:Home»Industry»Checkmate: The Long and the Short of It 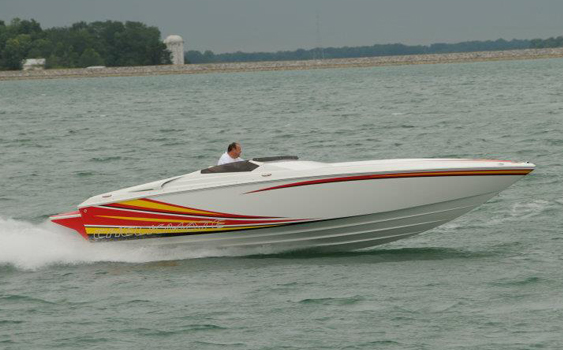 The 26 Convincor reportedly runs 70 mph on a 430-hp MerCruiser engine.

Within the same three-month period this year, Checkmate Marine introduced its 26 Convincor and 43 Punisher V-bottom sportboats. By any measure, pardon the pun, that presents a significant disparity in the Bucyrus, Ohio, builder’s line of affordable semi-custom sportboats from 18 to 30 feet. With the 90-plus-mph, 43-footer ringing in at a retail price of $499,000 and the 70-mph, 26-footer being offered at a base price for $88,000, the two new models couldn’t be at more differing ends of the performance and pricing spectrums.

To Doug Smith, the owner of Checkmate and founder and former owner of Baja Marine, it all makes perfect sense.

“The Checkmate line had not had any new product introductions in the 25- to 30-foot range in years,” says Smith. “We had updated the Checkmate models since we acquired the company, but we needed a new product. Nobody east of the Mississippi was building small sportboats anymore. The only new model I know of is the 29-footer from Outerlimits and it’s an exotic rocket, but with a Mercury Racing 565 engine it costs a couple of hundred thousand dollars. The 26 is just a plain old, hand-laid boat with gelcoat graphics that runs 70 mph, has a great big cockpit with McLeod bolsters, and is not going to break anybody at its base price. Our goal was to produce an affordable, entry-level sportboat, and we accomplished it.”

Smith continues, “There were tons of Baja customers who never had the chance to step up to a 25 or 26 Outlaw. Our dealers tell us that when they get a 25 Outlaw in good condition it’s their best used-boat seller—it’s never with them very long. There is a need for that kind of a boat. That’s where we came up with this idea. When I was at Baja, we tracked every single unit we sold. The 24, 25, and 26 Outlaws were the biggest sellers the company ever had.” 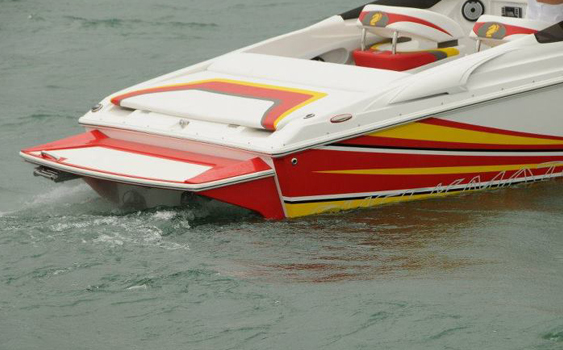 A fiberglass swim platform comes standard on the 26-footer.

The 26 Convincor presents a perfect complement to the Checkmate line, and its two-piece deck/liner and hull construction foreshadows a major change in the way the entire line eventually will be built. The exception to this—and the exception to everything Checkmate has ever done—is the 43 Punisher. First off, it’s a full-size offshore stepped hull V-bottom. Second, it is a completely custom boat. Smith says that during the 2013 production year, Checkmate will be capable of building a pair of 43-footers. The following year, he adds, that capacity will rise to three.

But the biggest challenge for Smith and his team isn’t building the 43 Punisher. It’s marketing a serious offshore boat with a serious price tag from a builder that has built its strong reputation on small sportboats. 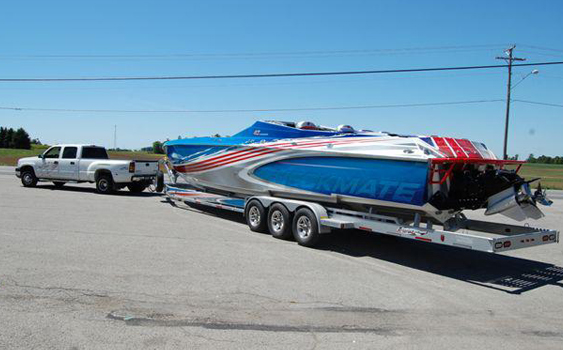 The 43 Punisher is the largest model in Checkmate history.

“I think that we don’t have some of the baggage other companies do—we’re nimble, says Smith. “The first 43 has [Mercury Racing] 700s, and we would like to stay with those motors in this boat going forward. We’re comfortable with those motors. We’re comfortable with a lot of the smaller high-performance motors. We think the guy who is going to put in big motors in a boat like this is going to go with a certain brand, like Cigarette. They really have that market covered. They have the brand recognition and they have the name.”

The 43 Punisher actually came out of collaboration between Checkmate and Seelye Wright Toy Store, the boat builder’s dealer in Kalamazoo, Mich. Bill Wright, the owner of the dealership, funded the new model, which was based on the Chief molds for the 43-footer that Checkmate had in storage. In exchange for the funding, Wright received the boat and the exclusive rights for his dealership to sell the new model for the next two years. 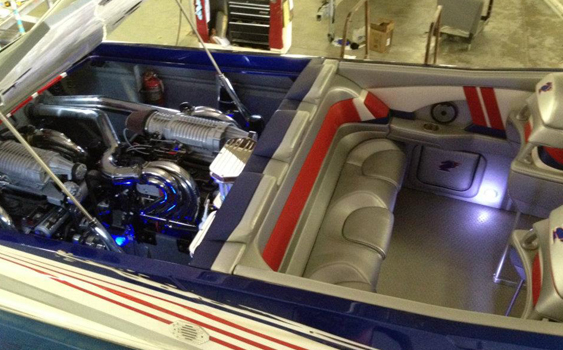 “Our goal was to do a custom boat at a reasonable cost with reasonable performance,” says Smith. “When they’re finally done testing, we think it’s going to end up in the low 90-mph range.”

Smith adds, “The Seelye Wright people think they have a couple of buyers in the wings. We have one guy in Canada who is interested it in it, and another guy in Venezuela who’s interested. So we already know there are some buyers for it out there.”