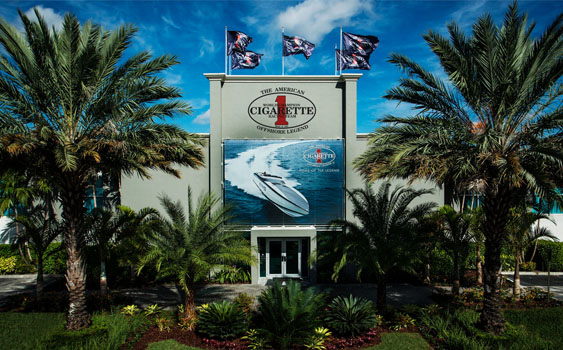 From any angle, the Cigarette facility is Opa-Locka, Fla., is stunning.

After back-to-back trips—we’re talking 48-hour turnarounds—to Lake Havasu City, Ariz., for Desert Storm and Washington, N.C., for the Outerlimits Kilo Records I have to admit that I wasn’t exactly digging the idea of flying from my home near San Francisco to Florida last week to interview Skip Braver, the owner of Cigarette Racing Team in Opa-Locka for a story in the upcoming May/June issue of Speed On The Water digital magazine. But there are some stories you can do by phone and some you can’t, and the in-depth interview with Braver fell into the latter category. So there I was last Wednesday morning, winging my way to South Florida for Thursday’s visit to what is undeniably the most upscale production facility in the high-performance powerboat world.

It was not my first trip to the Cigarette plant. Nor was it my first interview session with Braver—far from it as I’d done hours of interviews with him for a Powerboat magazine profile a few years after he bought the company in 2002. Plus, I’d interviewed him a few dozen more times during the past 12 years for various feature and news stories. And I’d toured the new plant shortly after it opened.

And yet somehow I still managed to be completely blown away by the Cigarette facility. As they did last year, Braver, Hector Rodriquez and the rest of the crew there will be opening their doors again in late October to performance boat enthusiasts who want to set up an appointment to tour it firsthand. The tours actually happen at the same time as the Fort Lauderdale Boat Show, which, if you time it correctly—key word given often-hellacious South Florida traffic—is all of 15 to 20 minutes from the plant.

This time around I found two departments—one glamorous and the other not so much—of Cigarette’s place compelling. The first was the in-house Design Center, where the company’s  clients can come to select every conceivable “basic” paint color combination, interior fabric, stitching and hardware option for their new boats. Most of it happens on a massive flat screen computer monitor where the client can see exactly what the choices he makes will look like before the boat goes into production. For the buyer, it translates into getting what he wants. For Cigarette, it translates into production efficiency.

At Cigarette’s in-house Design Center, client can choose from a dizzying array of options.

The second department I couldn’t get enough of? Lamination. OK, I know what you’re thinking, that I have serious mental issues, should stop writing immediately and seek professional help. But when I tell you Cigarette’s lamination department was immaculate—empty molds and tooling all protected in plastic sheeting and engaged molds and tooling anything but a sloppy mess—I am not exaggerating. And I’ve seen a few lamination departments.

But what impressed me most about this one was something Rodriguez told me. “You have to treat this area like a gem,” he said. “Everything starts here, and it has to be perfect or as close to perfect as possible. If it’s not, the only way to fix whatever is wrong is to throw money at it. Our goal is not to need a finishing department. We have one, but our goal is not to need one.” 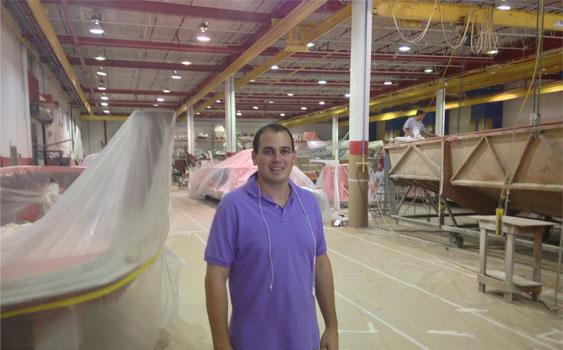 That quote replayed itself again and again in my head on the early morning flight back home last Thursday morning and, like the Cigarette plant itself and my interview with Braver—you can read the complete story when the Speed On The Water D-pub goes live later this month—it made the trip memorable. Can’t say I’m unhappy to be back home and off the road, but it was definitely worth yet another road trip.