You are at:Home»Industry»Delight Inside The Rev-X Stable 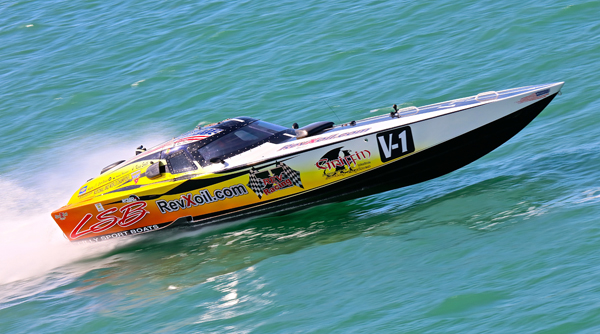 Though they come from entirely different high-performance boating worlds, Brit Lilly and Vern Gilbert have a lot in common. First and foremost, they share a need: a need for speed on the water.

For Lilly, who lives in Maryland, that need manifests itself in offshore powerboat racing, where he claimed yet another Super Boat International Superboat-Class World Championship in Key West, Fla., last week. Gilbert, on the other hand, is from Arizona and finds the satisfaction he craves in top-speed events such as the Lake of the Ozarks Shoot in Central Missouri, where he ran 182 mph in his open cockpit 40-foot Skater catamaran in August.

And both are sponsored by Rev-X Oil, which started in the automotive diesel power market and began its foray into the high-performance marine lubrication and additive market a couple of years ago.

Among the five Rex-X marine products that have Lilly and Gilbert singing their praises is a drive-oil called Drive H. (The H stands for “Heavyweight.”) That’s not to say the two veteran racers don’t use other Rev-X goodies, but Drive H definitely has captured their undivided attention.

“It’s the best gear lube, ever,” said Lilly, who runs a 525-hp Joey Griffin engine in his 30-foot Extreme V-bottom. “We used to have to put in new gear sets every two to three races at best before we started using this product. Well, I just finished the entire season on one set of gears. They didn’t even get wear pattern. I’m actually wearing out other drive components from normal use, like clutches, before I wear the gears. Now, once a year I replace the clutch instead of once a year replacing everything.”

Vern Gilbert is delighted with extra life that the Drive H product has given to his gear sets.

Though his performance application is different, Gilbert’s experience with the Rev-X Drive H product mirrors Lilly’s.

“I am running 2,200- to 2,400-hp Carson Brummett engines,” said Gilbert. “In two to three weekends of use, we typically knock the nitrate off the gears and have to replace them. Not with this stuff—it works fantastic. I’m really happy with it.”

Lilly also uses the Rev-X Marine Oil additive, which according to company literature “increases horsepower and torque.” That’s a big claim—and one that happens to be true, according to the offshore racer.

“We made a dyno pull using it and we saw seven more horsepower,” said Lilly. “My engine builder couldn’t believe it. He said that in 35 to 40 years of building engines, he’s never seen an additive increase horsepower.”

In addition to Drive H and Marine Oil additive, Rev-X offers Distance+ Marine, an “all-in-one” diesel additive; Marine Adrenaline, an “all-in-one” gasoline additive; and Drive L, a “heavily additized semi-synthetic” high-performance lubricant. The company plans to make a formidable push into the high-performance pleasure-boat market with all of its products next year. But getting them proven in two of most punishing competition environments—the kind Lilly and Gilbert call home—had to come first.

“We have a limited budget, like a lot of racers and high-performance powerboat owners,” said Lilly. “Using the Rev-X products has helped me save money and spend it on other things we need for the boat.”