You are at:Home»Industry»Forty Years in the Making 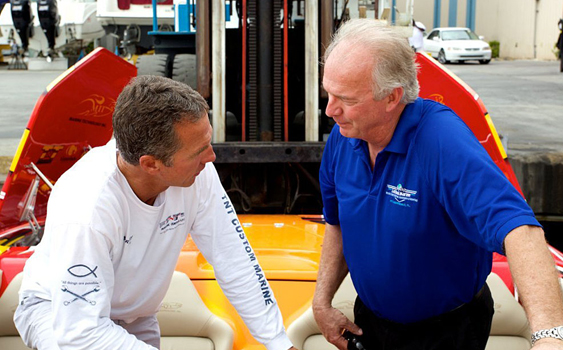 Bob Latham has enjoyed a great working relationship with TNT Marine’s John Tomlinson over the years.

Not only are Bob and Kathy Latham—the husband-and-wife team behind Latham Marine in Fort Lauderdale, Fla.—two of the nicest, most-approachable people in the marine industry, they’re also two of the most passionate, intelligent and successful people in the business.

Growing up in South Florida, Bob Latham started the family business in the early ’70s. Essentially a mobile repair van in the beginning, he decided to set up shop and, in 1973, Latham Marine hit the ground running, specializing in custom rigging, repair and small engine work. A few years later, Bob Latham met Kathy, his future wife and business partner, as well as a New Jersey boater who introduced him to the world offshore racing. 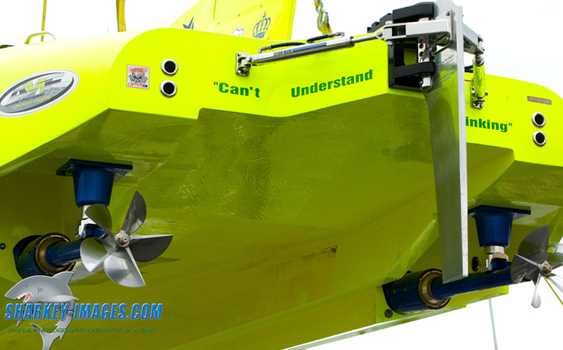 From the hydraulic steering rams to the rudder, the Miss GEICO chose Latham Marine products for its former 50-foot Mystic Powerboats catamaran.

From his time racing boats and frustration with products he thought should work better, Bob Latham designed an innovative high-performance hydraulic steering system, which he debuted in 1980. That was only the beginning for Latham Marine. Today, as the company looks upon its 40th anniversary next year, steering systems—for both stern drives and outboards—are still the company’s “bread and butter” products, according to Kathy Latham.

“Our forte has been steering, no doubt about it, but we’ve really diversified our product line over the years,” said Kathy, the mother of two daughters and the grandmother of a granddaughter and two grandsons. “I’m proud of so many things we’ve done over the years. But I’m probably most proud of the fact that my husband and I have been able to work as a team and surround ourselves with a great group of honest, hard-working people who help us turn out high-quality products that my husband pours his heart and soul into. It’s through his experiences with offshore racing and performance boating that allows us to build better and safer products for boaters worldwide.”

And when she says “worldwide” she isn’t exaggerating. Many Latham Marine products can be found on pleasure boats in Australia, England, Italy, United Arab Emirates and dozens more countries around the globe, but they also can be found on a variety of military applications for both the United States and U.S.-friendly countries.

“Just like any other business relationship, we take great pride in working with the U.S. military and the fact that they choose our product,” she said, adding that Latham Marine has been serving the military for 30-plus years. “Obviously I love our country and believe it’s the greatest country in the world. We’re proud to say everything we build is made in the USA. At the same time, we’re happy to have customers from all around the world.

“We have the best customers in the world—they make us better,” she continued. “In fact, many of our customers have come to us with a thought or a need and Bob has been able to design it as well as produce it for them. We’re thankful for our customers and their loyalty.” 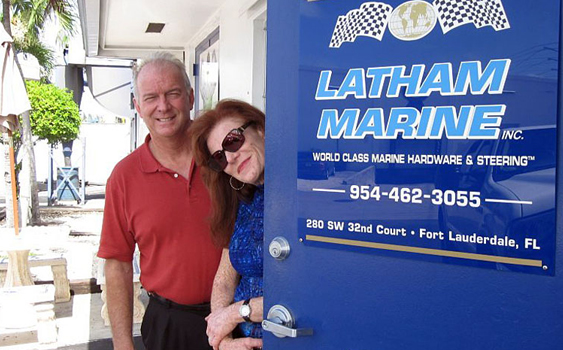 Kathy Latham readily admits she and her husband are workaholics, and pretty much scoffs at the thought of retirement, claiming that’s not in their vocabulary. She also boasts about the company’s conservative approach to business, which has kept them afloat despite the ups and downs of the boat business over the past four decades.

“Whenever we’ve made money in the past, we’ve made sure to save it and invest in our business,” said Kathy Latham. “Bob tries to buy new machines every four years so he has the latest technology. Better machinery allows us to build superior products that also are more efficiently made. We take a lot of pride in being well organized and efficient. At the end of the day, that can save a lot of time and headaches.” 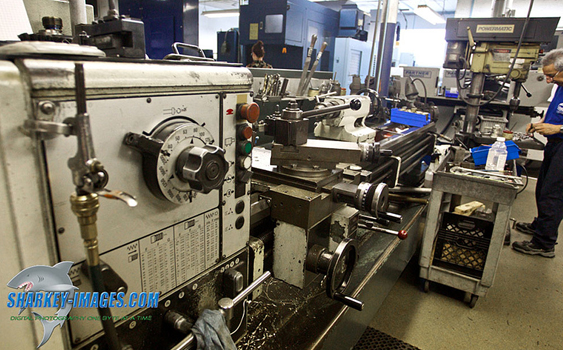 Latham Marine makes sure its manufacturing equipment is updated often to produce the best product possible.

With 40 years under their belts, the Lathams obviously have been doing things the right way. As the company does its best to create products that make boating safer with quality at the forefront, it’s also important to note that Latham Marine stands behind its product. There’s a reason you see the company’s steering, rudders, sea strainers and more on the fastest boats in the world.

For even more details on the history of Latham Marine, click here. You can also meet Bob and Kathy Latham if you’re going to be at the Miami International Boat Show in February. The company’s award-winning display will be located at booth I-100 again.