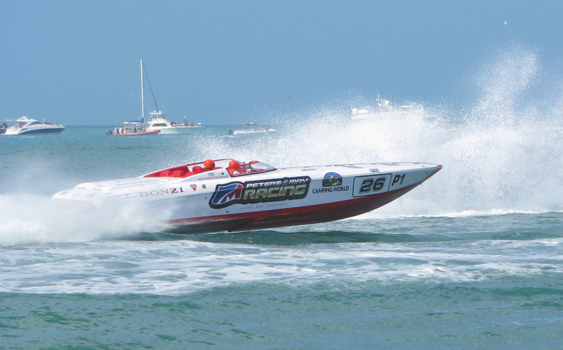 Propellers finished by BBlades have made their way in racing as well as pleasure applications.

Brett Anderson, the 49-year-old former Mercury Marine and Mercury Racing propeller expert who founded BBlades Professional Propellers in Princeton, Wis., seven years ago with 20-year Kiekhaefer Aeromarine/Mercury Racing prop veteran Bob Lucht, is a little overwhelmed with catch-up work at the moment. He’s been back from the recent Miami International Boat Show for about a week, and he’s swamped.

“It usually takes a couple of weeks to clear the fog from Miami, and by that time we’re off and running for the new season,” says Anderson. “Don’t get me wrong, I’m not complaining. It’s a good problem to have.”

“We had more activity in the booth this year than in the last two or three years,” Anderson continues. “And it was activity on the purchase level rather than tire-kickers. From what I’ve heard through the rumor mill, it was that way for a lot of folks at the show.” 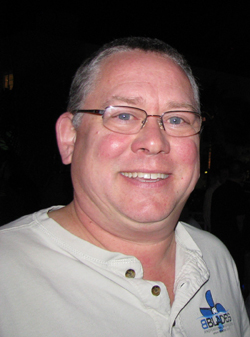 Brett Anderson: “As the boat hulls change—more steps, less steps, bigger steps, smaller steps—we have to accommodate that from the propeller end.”

In addition to taking at least six orders for sets of lab-finished propellers—and tentative orders for another 12 sets—BBlades sold 14 of the 18 Bravo One-style propeller lock sets it brought to the show. The company also took orders for five sets of recently released locks for No. 6 drive-style props. According to Anderson, they also had a couple of inquiries from well-known outdrive repair shops on purchasing and inventorying the uncommonly attractive locks for resale to their own customers.

BBlades started as a sales and tuning outfit shortly after Anderson—who mentored under the late Dennis Cavanaugh, by most accounts a propeller guru without equal—left Mercury Racing in 2004. By the 2005, the company was up and running, and focusing on propeller tuning—“lab-finishing” in Mercury parlance—as its core business. But it grew quickly from there, and before long BBlades became a dealer for seven different propeller brands including Mercury Racing, Hering and Hydromotive. And the company offers lab-finishing for all of them.

“What we do here is something you’re finding more and more of in the propeller world,” says Anderson. “We don’t lab-finish propellers to a specific recipe the way we did all those years at Mercury Racing. We do it specifically to each boat. We look at what the current setup is, the hull and engine, the X-dimension of the drives and the loads in the boat like passengers and fuel. Then we look at the goals the customer is trying to achieve. Though the skills and knowledge we have acquired, we modify our recipe to meet those goals.”

BBlades offers two sets of its own propellers, both of which Anderson says are “poured to our specs” by a subcontracted foundry. Both sets are targeted to the outboard market. They arrive at the company fresh out of the molds. The folks at BBlades handle the rest.

Called the Blaster series, the first set is for outboard engines from 150 to 300 hp and is what Anderson calls a “clopper,” half cleaver, half chopper. Blaster props range from 24-inch to 32-inch pitch, and all of them are lab-finished.

The second proprietary propeller offering from BBlades is its Bravo Outboard (OB) series. To create this set of wheels, the company actually used a Mercury Bravo One propeller casting. With pitches from 22 to 36 inches, the props are available either stock or lab-finished.

In addition to its two outboard propeller lines, BBlades’ own products include billet aluminum No. 6 drive spacers from 1/4 inch to three inches and aluminum stud spacers that eliminate the need to change out studs when experimenting with different drive spacers. 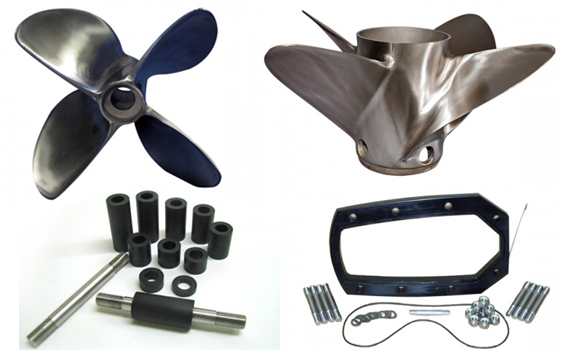 Clockwise from upper left: The Blaster series of outboard propellers is offered for engines from 150 to 300 hp; BBlades used a Mercury Bravo One casting to develop its Bravo OB line of props; BBlades driver spacers are made from billet aluminum; the BBlades stud spacer kits makes driver spacer swaps easier.

So what’s next for the company?

“We actually are developing some Bravo drive applications products,” Anderson said. “We’re hoping to have them in Miami next year.”

Anderson declines to offer more detail on his company’s upcoming Bravo products. But he is more than happy to discuss the future of high-performance marine propellers in general, which he says always is driven by the boat and engine builders.

“As the boat hulls change—more steps, less steps, bigger steps, smaller steps—we have to accommodate that from the propeller end,” Anderson explains. “Boat manufacturers keep developing these slippery hulls and we have to figure out how to keep them hooked up. It’s a propeller, just a piece of steel that creates thrust. But small changes can make a huge difference. That’s where the whole element of rake angle has come in and become more important. They used to all be 15 degrees. Now, because of these slippery hulls, they are anything from 15 to 23 degrees.”

“Who would have thought there’d be 1,650-hp Mercury Racing engine?” Anderson continues. “The are some major hurdles to get over when you’re talking about pitch sizes above 40 inches. The angle of attack, the way the blade is attached to the propeller, is so severe. For so many years, we didn’t have anything above a 35-inch-pitch propeller. As we move forward with these bigger-pitch propellers, you may see some different things in blade area and pitch progression. You may see some really unique things like adjustable rake angle, parabolic rake angles that change as they go through the blade. That’s kind of outside-the-box thinking, but I think it’s something we’re going to have to consider as we go forward. The whole bottom, drive and engine thing kind of dictates what we have to do next.”