You are at:Home»Industry»Gallagher Excited About Future with Marine Technology Inc. 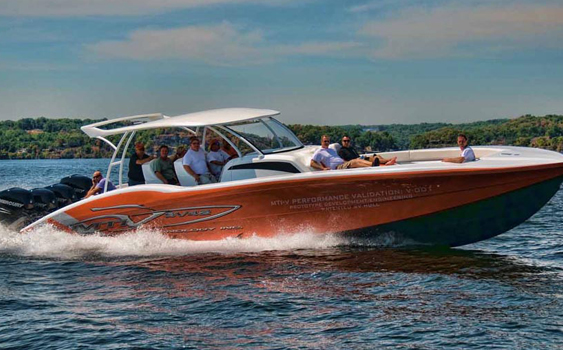 MTI provided demo rides on its prototype SV42 center console during the Lake of the Ozarks Shootout in August. (Photo by Jay Nichols/Naples Image.)

There’s a reason the Offshore Only general discussion was buzzing last week when the news became public knowledge that Tim Gallagher was joining the team at Marine Technology Inc. (MTI), a company known for its stellar high-performance catamarans. (Read Matt Trulio’s story on speedonthewater.com.)

Gallagher is as likeable as anyone in the marine industry—I’ve never heard anyone say a negative thing about him, and that’s a hard reputation to come by. But he works hard for that reputation; he takes pride in it, too. He has ever since the day he gave notice at Evinrude to join the sales team at Cigarette Racing. In 2010, Gallagher left his job as Cigarette’s sales director to assume general manager responsibilities at Deep Impact Boats, a role he held until last week. 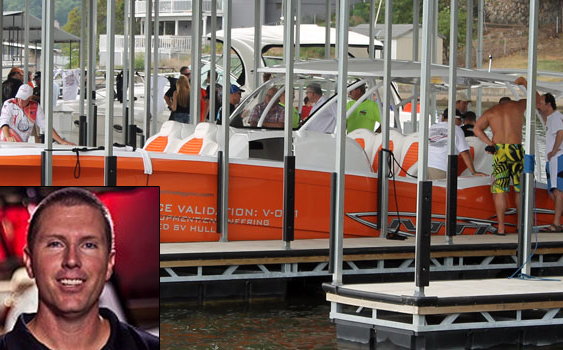 With his experience in center consoles and go-fast boats, Gallagher is a natural fit for MTI, which is rolling out its new SV42 center console at the Miami International Boat Show in February. In a conversation Tuesday, Gallagher, who was wrapping up a visit to MTI’s lamination plant in Green Bay, Wis., told me he missed the performance boats tremendously.

“I enjoy the center consoles, but the high-performance stuff is in my blood,” said Gallagher, who was named sales and marketing manager, a position created because of the high level of interest for the new 42-foot center console. “The more I talked with Randy [Scism, MTI’s owner], the more I knew this was a perfect fit. It gets me back in the performance market and keeps me doing the center console thing, too.

“I’m very excited about the new SV42,” he continued. “It is an awesome boat that Randy has put years of preparation and R&D into before bringing it to market. I have so much respect for Randy and the boats he builds. He definitely has the right crew here. Everybody works hard and takes a lot of pride in their job. What I like best is this is about growing the business, not just getting the center console out there.” 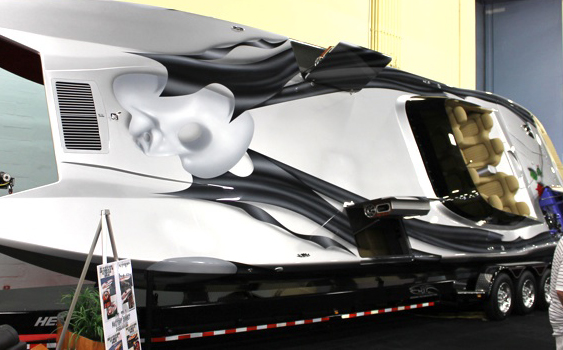 Last year’s 48-foot MTI, Phantom, will be hard to top, but rumor has it that the company will have two new show-stopping catamaran models for Miami. (Photo by Jason Johnson.)

Gallagher, who lives in South Florida with his wife Erin and their three-year-old son Evan, hinted at two new catamaran models to come from MTI at the 2013 Miami International Boat Show, calling them jaw-droppers but providing zero detail—at least for now.

“It’s full throttle from now until Miami,” said Gallagher, who plans to commute to the MTI corporate office in Wentzville, Mo., at least once a month. “We’ve got some great product and it’s time to bring it to market for people to see. It’s very exciting around here.”

Scism said he’s looking forward to the opportunities to come.

“I’ve known Tim for a long time and I am eager to have him come on board with us,” said Scism, who founded MTI in 1999. “The new SV42 is going to be a big seller for us. We needed someone who knows the market and someone who works well with customers. Tim has successfully worked with many leading manufacturers in the V-bottom market and brings a high level of enthusiasm and knowledge to MTI. He will be a great asset to our company as he leads our sales and marketing initiatives.”

Scism isn’t over-selling Gallagher or the 42-footer. You can read my article from a test drive of the prototype on Missouri’s Lake of the Ozarks in August. If you’re interested in reaching Gallagher, you can email him at [email protected].