You are at:Home»Industry»Member Spotlight: Dave Leonhardt at XT Innovations 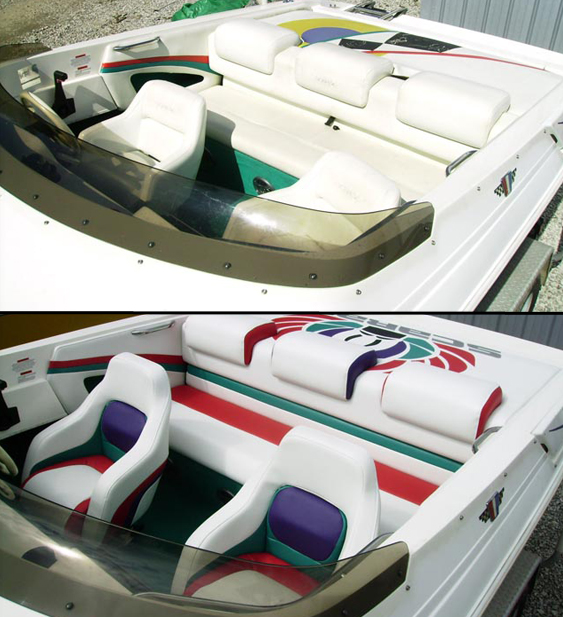 Scarab interior “before” XT Innovation’s refurbishment (top) and “after.”

The story of how XT Innovations in Bucyrus, Ohio, got started is pretty simple. In 2008, Baja Marine closed and “relocated”—at least until bankruptcy turned off the lights—to Fountain Powerboats in Washington, N.C. That left about 400 people, many of whom had worked at the Baja plant for most of their adult lives, out of work.

In a city of less than 13,000 people, the death of the town’s largest single employer has a ripple effect that goes beyond the loss of 400 jobs. It has an impact that extends far past 400 people no longer drawing a paycheck. It changes everything.

Among those put out of work when Baja left town were Dave Leonhardt and Lane Carlisle. Both had worked for Baja for more than 20 years—Leonhardt in new product development that included everything from boat interiors to hull design, and Carlisle who handled interior design and installation for all Baja models.

But when Leonhardt and Carlisle got the news that Baja would be no more, they didn’t spend a lot of time wringing their hands, which at the time were plenty busy packing up the tooling and designs Fountain wanted and shipping them off to North Carolina. Instead, they started XT Innovations, a full-service boat interior design, installation and refurbishment center in Bucyrus. (The company also does upholstery and interior work outside the marine world, including quite a bit for the golf cart market.)

In addition to their own experience with Baja, they had an ace in the hole in the form of Carlisle’s wife, Beverly, who ran Baja’s sewing and canvas department for 23 years. Clearly, they had backgrounds, talent and experience for a new business. But was there, in the wake of the recession that crushed much of the go-fast boat industry, enough demand for their services?

The answer was yes.

“Lane and I didn’t apply for a job anywhere else,” says Leonhardt. “We just looked at each other and said, ‘Let’s start our own thing.’ From there we’ve been pretty much doubling our business every year. But we’re not just an upholstery shop. We’re more of a design center for interiors. We take everything we did on new boats at Baja and do it on old boats.” 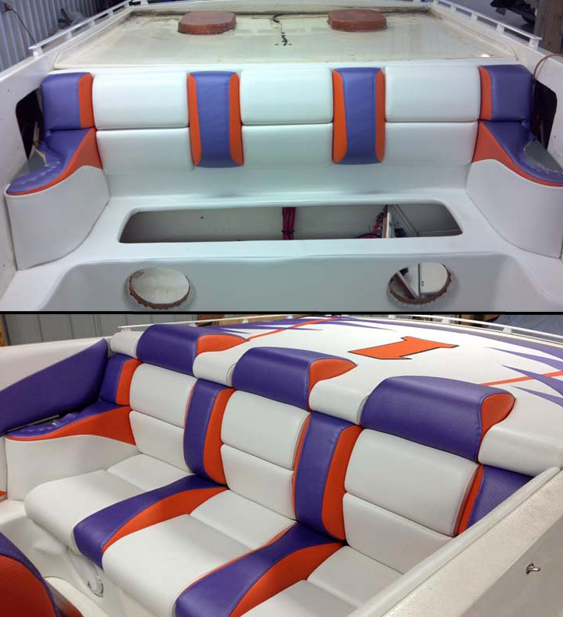 Cigarette interior “during” (top) and “after.”

According to Leonhardt, the company actually divides its business equally between designing and building interiors for new models and designing and refurbishing the interiors of older models. New-boat manufacturers on XT Innovation’s client list include Crest pontoon, Airship RIBs and Checkmate sportboats. Restorations have included older models from Cigarette, Scarab and—not surprisingly—Baja.

“Prior to the closing of Baja, I was termed a ‘lifer,’ someone who [was]going to work there until he retired,” says Leonhardt. “It was our lifeblood and sweat and tears that went into building those plugs and interior designs, so it stung when they closed. I probably wasn’t right for six months to a year after that. But I’m over it now. Because of the way it went down, we’re actually enjoying a lot more business.”

Leonhardt continues, “When Reggie [Fountain] got Baja, he only wanted the new models and he was going to build them his way. He didn’t want anything to do with the past, he didn’t want the older models. In my opinion, that was probably his biggest mistake because right now the value of Baja is the history and not the future boats. Everybody was bringing us their 1990s and 2000s Baja boats for refurbishment.”

Among the strongest brands for XT Innovation’s interior restoration business is Cigarette, according to Leonhardt. The company has refurbished a number of interiors for models from the iconic powerboat builder, and should have another one in the shop in the next couple of weeks.

“Cigarette is not a brand that anyone is going to haul to the dumpster,” said Leonhardt. “Every one of them is going to get redone, in my opinion.”

While Leonhardt is still hands-on when it comes to boat interior design work and installation, he also wears the company’s primary sales hat. At the moment, however, there’s not much need for him in that role.

“Because of the time of year, we’re swamped with refurbishment work right now,” he says. “We have 12 projects in the shop. But come July, I’ll [be]beating the bushes to get people to let me have their boats for two weeks.”