You are at:Home»Industry»Nordic Continues Winning Ways

In at least one way, the annual Catalina Ski Race in Southern California is one of the few remaining true offshore races, the kind where boats disappear into the horizon and don’t immediately return to the start-finish line. The 62-mile roundtrip contest leaves Long Beach Harbor, makes a 180-degree sweeping turn outside Avalon Harbor on Catalina Island and then comes back to the massive commercial port. The water between the start and turnaround points can be smooth or rough, but regardless it is an open ocean race that routinely sees average speeds above 80 mph and top speeds in the 95-mph range.

For those who find those speeds unimpressive—today’s offshore fastest raceboats routinely top the 150-mph mark—it’s worth remembering that the boats in the Catalina Ski Race are pulling highly trained, incredibly skilled and moderately crazy athletes behind them. For the skiers and the team in the boat—driver, observer and navigator—it is the Daytona 500 of water-ski racing. 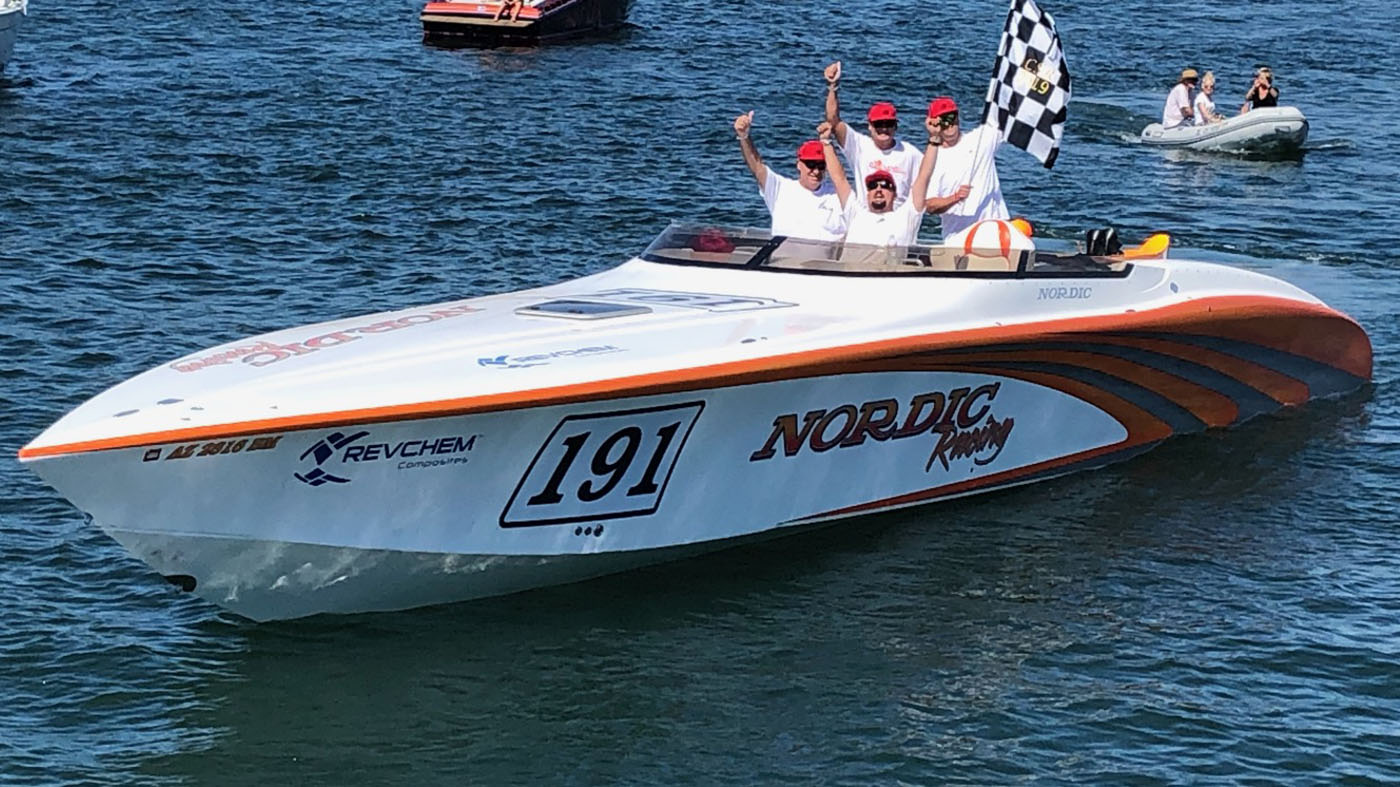 All of which makes skier Todd Haig’s 14th Catalina Ski Race victory earlier this month a significant accomplishment. The 39-year-old did his first Catalina Ski Race when he was 10 years old and won this year’s contest with a time of 50 minutes and 40 seconds. That broke his own record in the Men’s Open division—and he has competed in the event 25-plus times, he estimated.

Haig’s 50-plus-percent winning percentage is more than impressive and puts him squarely in the “Greatest Water-Ski Racer of All Time” discussion.

Equally noteworthy is that driver Randy Davis, the owner of Nordic Boats in Lake Havasu City, Ariz., has pulled Haig to all of those victories in a 43-foot Nordic V-bottom powered by 1,200-hp engines upgraded by Teague Custom Marine in Valencia, Calif.

“We led from start to finish,” said Davis, who teamed up with observer Dennis Hall and navigator Steve Davis (his son) in cockpit during the 71st annual race. “I don’t want to say it was easy. It was stressful. We have won and lost that race at the finish.

Added Haig, “We came in prepared knowing we had to run our race. We set a plan, and the plan worked out perfectly.”

Participants in next month’s Big Cat Poker Run in Northern California will get a good look at the first 35-foot flat-deck Nordic catamaran powered by Mercury Racing 400R outboard engines in action.

A lifelong boater from Southern California, Davis purchased Nordic in 2005. The company had long been a staple of the West Coast custom powerboat world but needed an infusion of capital and energy. Davis brought both, and Nordic was one of the few go-fast boat companies in the West Coast scene to power through the Recession of 2008. It wasn’t easy—the boat business never is—but Nordic emerged as one of the most solid players in the market. The company, which purchased the Hallett Boats tooling in September 2017, is completing one boat a week, according to Davis.

“Deck boat sales are on fire right now,” he said. “And our 35-foot flat-deck catamaran is about to take off. We will have one with Mercury Racing 400R outboards at the Big Cat Poker Run in Northern California next month. I’m letting Paul Wallner, one of our customers, use it in the event. He also has one ordered that will get 450Rs. He’s really good at dialing in his boats and we expect big things from that one.”

Nordic currently has three projects “in the works” Davis said. The company is working on its largest V-bottom to date, which means it has to be more than 47 feet long. It also is working on a smaller, outboard-powered sport catamaran between 28 and 35 feet long. And in response to the still-hot performance-oriented center console market, Nordic is designing one of its own.

“A lot of people are using center consoles as V-bottom deck boats,” Davis said. “Ours will be a little different. It will be more of a fishing boat.”

Will that play with the Nordic faithful? Davis, who does his homework, believes it will. And given Nordic’s winning ways, only a fool would bet against him.